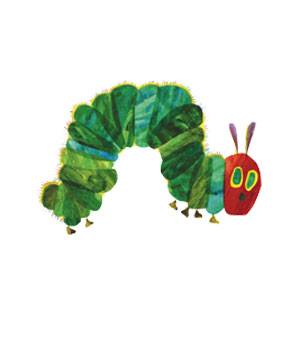 What even is this book.

I mean, yes, it’s about a very hungry caterpillar. He’s so damn hungry, he eats, like, the whole world, and then gets really big and turns into a butterfly the end. 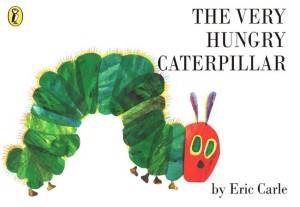 But let’s look more closely at this seemingly innocuous children’s classic. After all, we wouldn’t want to be sending the wrong messages to our children, NOW WOULD WE.

So first, this skinny-ass caterpillar pops out of an egg and his first thought isn’t “Oh, wow, EXISTENCE!” or “Where’s my mama?” or “What is the meaning of life?” No. His first thought it “NOMNOMNOMNOMNOM.” Now, I know that this is also the first thought that humans have when they are born, but, you know, I hold caterpillars to a higher standard. He couldn’t have paused for even one second to take in the splendor of the leaf upon which he stepped, or the beautiful moon watching over his birth??? The disappointment, you guys.

The caterpillar starts looking for some grub and shows a real taste for fruit. Like, he really really really likes fruit. After all, he eats apples, pears, plums, you name it. Now, I didn’t know that caterpillars could count, but apparently this one can, because he sets up this whole complicated reverse-diet, in which he eats one piece of fruit on Monday (because apparently caterpillars also understand days of the week), two on Tuesday, three on Wednesday, and so on up until Saturday, when he goes absolutely ballistic.

So what I want to know is, where is this caterpillar getting all of this fantastic food??? He jumps from eating just fruit to scarfing down everything you can think of: ice cream, salami, a lollipop, watermelon, cheese, etc.. And then he gets a stomach ache. Yeah, well, no sh*t, Sherlock.

I guess the take-away is that fruit gets boring pretty quickly, and you’ll be so disenchanted after trying a fruit diet that you’ll then binge on everything else you can get your hands (caterpillar legs) on. Not exactly the kind of message I want to send to my kids.

And by the way, what kind of caterpillar eats ice cream? Where would he even get it? The ice cream truck? Does this mean that ice cream trucks are infested with caterpillars? Who knows what else might be lurking amongst the sherbet and sprinkles?? It’s like Upton Sinclair’s The Jungle all over again!!

And then, the caterpillar suddenly comes to his senses and noshes on a single green leaf. Because that can make up for the gluttony that was his life just one page ago. I think not. Sorry, but stomachache or no stomachache, you do not give up ice cream, lollipops, salami, cupcakes, and cheese for a damn leaf. That’s just crazy talk.

Well, next thing you know, he’s HUGE, as in HUUUGE. So I’m no entomologist, but I’m guessing that caterpillars don’t get that big, no matter how much ice cream they eat. They’d probably explode from too many waffle cones before that would happen. But no, the caterpillar is now like a million pounds and apparently that’s fine. Because children won’t then go out hunting for million-pound caterpillars and then come home disappointed because Eric Carle LIED to them noooooooooooooooo.

But suddenly, it hits him: why not build a cocoon?! Of course, this is instinct, but doesn’t he realize that cocooning himself up would mean no more ice cream, salami, and cupcakes for a while? He needs to think things through more.

And then, without so much as a “hey kids, these are the biological processes that take place inside the cocoon to change the caterpillar into a butterfly,” we’re told that the caterpillar has suddenly become a butterfly. OH REALLY. And how are we supposed to believe this without evidence or explanation? I need data, people, hard data and facts and things and whatnot.

Anyway, I find this story about a gluttonous, shape-shifting caterpillar misleading and possibly harmful to the minds of our extremely impressionable children. You’ve been warned.