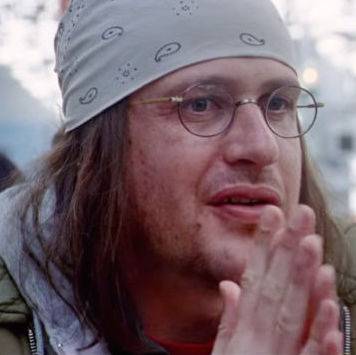 Early on in The End of the Tour, Jason Segel – playing the late David Foster Wallace – is sitting in a dusty living room chair, inside a ranch house that looks poorly heated, surrounded by fields of deep snow somewhere in rural Illinois. The chair is among a backdrop of tightly shelved books and a shadeless lamp that makes the lighting almost seem unpleasant. Segel’s unshaven, bespectacled face is in focus while the spines of the books are blurred. What works rest upon the bookcases is anyone’s guess.

It’s a platitude that would’ve likely filled David Foster Wallace with overwhelming anxiety. There is an inherent aura of exposure, a sense of staged pretentiousness, the type of calculated scene that would undoubtedly make DFW feel self-conscious and on display. Yet, there is a sense of normalcy too, that eerie feeling of loneliness that everyone has dealt with.

This scene sets a tone for the quotidian Midwestern backdrop of the film. As the title suggests, and as it actually happened years ago, David Lipsky (Jessie Eisenberg) only joins Wallace for the last short leg of his book tour. Over five days, the duo spends much time in the confined spaces of planes and cars, which provides a conduit for the now infamous interview.

The film is neither the idyllic bro anthem biopic many have deemed it, nor a genuine look at the troubled cult hero that is its focal point. Many of the necessary emotions are conveyed: confusion, isolation, depression, energy, fatigue, addiction, consumer’s guilt, anxiety, regret, self-awareness, jealousy, and fear. This last emotion is expressed tacitly, sprinkled among the expected hyper-conscious intellectual dialogue.

David Foster Wallace was constantly tweaking the clichés that he felt defined him, but he also knew that this adjustment was in itself a cliché, and it’s likely one of the many things that haunted him. It’s also one of the defining characteristics of his writing.

What we find then is a truly enjoyable film that could never live up to expectations. The gigantic, deified book looming in its background, Infinite Jest, has placed the bar too high, and the myth of the peculiar writer that penned such an incendiary novel pushes it skyward until reaching it is unfathomable. Meanwhile, many of DFW’s foibles sit quietly on the perimeter. We see addiction in glimpses, depressive snapshots, bits of anger sandwiched in between hazy scenes of Americana, but most of what we see, again, true to the past, is two intellectuals squabbling and joking on car rides and in hotel rooms.

For example, when Lipsky first arrives at Wallace’s home, Wallace recognizes the socioeconomic cultural similarities that have defined their mutual erudite nature, but it is a brief acknowledgement. Later, when we see the two writers’ personalities clash, Wallace opines that his intellectualism isn’t something public and natural, whereas Lipsky has no problem relaying his smartness socially. These scenes suggest Wallace’s lifetime of introspection, but there is simply no way to capture it on screen.

There is certainly some honesty in these moments. Where the film had every opportunity to overdo the pedantic dialogue or rouse the audience with hyperbolic emotion it stayed steady, adhering to the Wallaceian virtues of ennui, quiet anxiety, and teeming self-awareness. At the same time the emotions looming beneath the surface are deftly conveyed. It makes it hard to look away from the verbal sparring between Wallace and Lipsky. However, the legend of DFW appears to be the focus of the film more so than the man himself; at least, that’s how it feels to someone who has never met him. Who am I to say?

Maybe this is where my sense of longing lies. Those that have tackled DFW’s work invest many hours reading through every extended thought, drawn out parable and not-so-brief aside. One hundred and six minutes of film is not enough time to develop that same sense of investment. When the lights went up, The End of the Tour left me knowing that I had received my money’s worth, but feeling as if I’d read one of Wallace’s endnotes in a major composition.

All in all, there’s clear reason the film has received such critical acclaim. The writing is stellar and Segel and Eisenberg are at their best. For those who are fans of DFW, the film will certainly not be a disappointment (I really enjoyed it despite being nitpicky), but it will leave you wanting more and wondering if the man himself would write off his silver screen portrayal as an uncontrollable side effect of fame, or feel betrayed being immortalized without his consent.