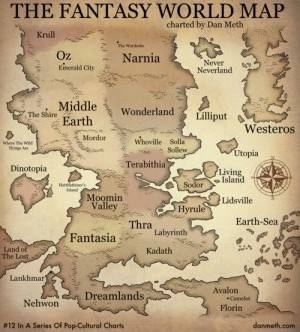 On August 4, the day her new novel The Fifth Season was released, N.K. Jemisin posted the map from her novel on her blog.

Not surprising, right? Jemisin writes epic fantasy, and maps are pretty standard in the genre. But Jemisin is no ordinary fantasy writer: she’s one of a handful of authors who have been vocal about their distaste for maps in high fantasy. Her Inheritance series has no maps. I know, because before I knew Jemisin’s feelings about maps, I looked all over the Internet for one.

Why aren’t some fantasy authors fans of maps? Maps on the fly-leaf are cliché; every author from J.R.R. Tolkien to George R. R. Martin seems to have one. Sometimes being able to see every major location in a world spoils a story for a reader: if the map shows five cities, and the characters are going off on a quest, often they hit all five cities. Some authors complain that it takes away from story they’re trying to tell; Terry Goodkind has said he considers maps a distraction from the story. And then there are the fantasy fans who insist that maps can be a little silly.

I won’t argue that maps can be ridiculous. The Fantastique Collective’s post about bad fantasy maps made me laugh out loud (thank you for calling out Tolkien’s square mountain range, guys) but I cannot lie: like Rachel Cordasco, who published two mappish posts this January, I love maps.

Maps help me figure out where things are, and, as someone with mild dyslexia, are very helpful because I can see which way characters are traveling. Also, maps help me with idle exercises like helping me figure out how far Mordor really is from The Shire. (Fun fact: if my home is Bag End, Disney World is Mount Doom.)

So why did N.K. Jemisin, who doesn’t like maps, include one for this new book? While the previous series might not have called for one, this particular book centers on a continent where the geography is almost literally a character. In her post, Jemisin said she needed a map to write this book.

She’s not the only contemporary author who is rejecting the old standard of including a map just because that’s what genre authors do. A few writers have been more consciously using (or refusing) in their books.

One book, many maps
Joe Abercrombie, like Jemisin, embraced maps after a mapless fantasy trilogy. There were no maps in his First Law series, and in fact wrote about this in 2007, saying that maps weren’t suitable for his character-driven fiction.

“I want a reader to be nailed to the text, chewing their fingernails to find out what happens next,” he wrote, “not constantly flipping back to the fly-leaf to check just how far north exactly Carleon is from Uffrith, or whatever.”

Two books later, however, he didn’t just include one map, he had five. The maps in The Heroes were intriguing because they depicted the same valley during a battle, showing the movement of troops on each day.

The probably, maybe, spoiler-free map
Sometimes a map is deliberately vague, or doesn’t match the book. (Jemisin’s falls into this category; not all of the towns, roads and stations she mentions in the book are on the map.) Patrick Rothfuss’s The Kingkiller Chronicles is a maddening example of this. Some places — important places — just aren’t marked on the map. Rothfuss was asked about this by Jo Walton, back when she was doing a close reread of his books on Tor.com. He didn’t really answer the question, saying instead that he would address this on his blog, but I’ve been rummaging around over there and no dice. Is his map vague for plot reasons? We will not know until his third book comes out, and it’s killing me.

The you’re not getting a map until the movie comes out map
And then there are the authors who avoid maps completely. Remember back before the The Hunger Games movies, when fans of the books were so hungry for maps of Panem that they were making them themselves? (And some of them were beautiful.) Suzanne Collins never released an official map but she did (I heard) work with Lionsgate when they released their official map for this summer’s The Hunger Games Exhibition in NYC. As far as I can tell, Collins has never talked or written about the lack of a map. (There was allegedly a Borders Book Club video in which she mentioned maps, but Borders took that video to its grave.)

What’s your favorite use of maps in a fantasy novel? Tell me in the comments, because I really, really want to see them.

Also, I’ve decided to investigate the phenomenon of maps in contemporary fantasy further. I’m digging into the process of map-making in fantasy series, talking to publishers and the mapmakers themselves about how a map is made, who makes the decision to include a map in a book, and how maps are used.

Got any questions about maps? Leave them below in the comments and (although I make no promises) I will do my best to get them answered.