During one of the many Getting To Know You conversations between new Riot contributors, Leila Roy and Jamie Canaves discovered that they had a childhood literary experience in common: V.C. Andrews’ Flowers in the Attic. That led to another commonality—that they both had My Sweet Audrina in their TBR piles. Obviously, that called for a readalong! Here’s how it went.

Leila: For any readers out there who haven’t experienced the exquisite horror-joy experience that comes of reading a V.C. Andrews book, I feel that I need to start this off by quoting the first two paragraphs:

There was something strange about the house where I grew up. There were shadows in the corners and whispers on the stairs and time was as irrelevant as honesty. Though how I knew that I couldn’t say.

There was a war going on in our house, a silent war that sounded no guns, and the bodies that fell were only wishes that died and the bullets were only words and the blood that spilled was always called pride. 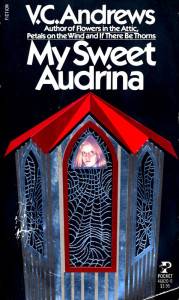 I kind of can’t believe I’m going to say this, but compared to the Dollanganger books—Flowers in the Attic, etc.—My Sweet Audrina is almost RESTRAINED. I mean, there’s no doubt that V.C. Andrews should win a lifetime achievement award in OVERWROUGHT MELODRAMA, but I think her writing in this one was vastly better than in the others I’ve read. Jamie?

Jamie: I read all her books through the Logan series (mind you this was all tween/teen years) and the only one I’ve reread as an adult is My Sweet Audrina. I remember this book always stood out to me from all the rest but at the time I couldn’t really place why, and assumed maybe it was because it was Andrews’ only stand-alone novel. I did think going in that there might be some cringing at the writing (there was: so much repetition!; sometimes the characters sounded like when children play dolls and it was children speaking pretending to be adults; pretty sure this book covered EVERY single male/female stereotype) but nowhere near as bad as I thought it would be and what I was surprised about was some of the content. But we’ll get to that later as I’ve detoured—back to the scheduled beginning please.

Leila: I know! V.C. Andrews crammed SO MUCH JAWDROPPY STUFF in here that I’m having a hard time holding back, too!

Okay, so. A few pages in, Audrina lays out the basic premise. Which, like everything else about this book, is completely bananas. She is, you see, the SECOND Audrina. Her older sister, the FIRST Audrina, disobeyed their parents by taking a walk in the woods… where she was gang-raped and subsequently died. It should probably be noted that this book should probably be PLASTERED with ALLLLLL of the trigger warnings. SERIOUSLY. ALL OF THEM.

Anyway. So. Her parents had a SECOND daughter and named her after the first one, because that’s not psychologically scarring or anything. They keep the First Audrina’s room like a shrine, and every night, she is forced to go in there with her father, who rocks in a rocking chair with her on his lap while he tries to “fill her up with the First and Best Audrina’s memories.” Which, can I just say? MASSIVELY CREEPY.

Jamie: I remembered the “twist” all this time later. (I actually got my 3 things right: “a prism, drooling, and a bon-bon eating, couch surfing character.” Well kind of, the mom was addicted to romance novels, not TV.) So I read all that knowing what was coming. What I had shockingly FORGOTTEN were two major things—which I really need to get my head examined because how could I forget—how beyond creepy everything with the father was and VERA. How could I have forgotten her? And actually I think I forgot about the creep factor on purpose. If I ever hear the word Papa or how handsome someone thinks their Papa is I’m going to beat them with this book.

So did you see the “twist” coming? As a kid it was a huge WHAT? moment, but not sure it works on adults.

Leila: YES. I would like to take a moment to congratulate myself for TOTALLY CALLING THE TWIST pretty early on. And I would definitely like to thank everyone on Twitter who followed along with my reading for NOT spoiling it for me. YOU ALL ARE THE BEST.

Jamie: I had so much fun reading your tweets knowing you’d never read it before and watching your reactions.

Leila: I feel that there isn’t nearly enough live-tweeting of books. Okay, three most amazing moments? My choices are as follows:

• When Vera miscarries and her mother’s only response is to tell her to use cold water while she’s cleaning the rug.

• “But the rocking chair knew.” That is an actual sentence in this book. “BUT THE ROCKING CHAIR KNEWWWWW.”

• When the Second Audrina proceeded to exhume the First Audrina’s grave and then have sex all over it. 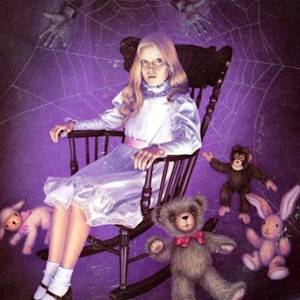 • The weekly tea party “seance” with the aunt. That was amazing—minus the whole racist slant that of course the character “died” and was eaten by cannibals because she visited Africa.

• The fact that Audrina and her mother having a mixture of all hair colors made them beautiful because it sounded like a hot mess to me.

• And I’m going to cheat and pick a 4th which is really my ALL TIME FAVORITE quote: “That bulging hardness clamored the wind chimes in my head…” That is a thing. said. in this book. AMAZING. I want to walk up to people and just say that and walk away.

Leila: That’s how I feel about the rocking chair quote. Just, WHAT??

What about that ending? Was that not the WORST ENDING OF ALL TIME? I was so mad that I threw my book across the room. It’s a week later, and I still can’t think about it without wanting to contact V.C. Andrews—via Ouija board, naturally—to ask her WHYYYYYYYYYYYYYYYYYY??? We were SUPPOSED to be left with a feeling of abject horror, right? I mean… that wasn’t supposed to be HAPPY, was it? WAS IT?

Jamie: I’m good with the not-happy ending of things but this one just made no sense. None. And to me it was just gross after everything that had happened. I wanted to set the house on fire. FIRE. And then call Beavis and Butt-head over to laugh at the fire.

Any last thoughts, Jamie? I continue to not really entirely understand my fascination with V.C. Andrews—holy cow, though, I really wish there was some sort of Scholarly Biography of her—but I certainly can’t deny that said fascination is there.

Jamie: I think it may be something that stays with you if it comes into your life when you’re a kid/teen. And also that story is pretty nuts. I just wish it didn’t have things like using disabilities as “shock” “plot twisty” things. And with that said, I am insanely curious how Lifetime is going to adapt the book to film. I mean what will they leave? What will they change? What will they pretend never existed?—I hope they don’t just make a Lolita/Vera movie with the Audrina twist and call it a wrap.

Leila: YES. Being that this is a V.C. Andrews book, I expected over-the-top writing and plotting and characters, and I certainly wasn’t expecting it to be particularly culturally aware… BUT HOLY COW, WAS SHE TRYING TO WIN THE INSENSITIVITY OLYMPICS?

…while the reveal is unsurprising, the decision to treat it as a Shocking Secret is just… what. #mysweetaudrina pic.twitter.com/MtcxmsHzFu

But, yeah. I’m totallyyyyyyy going to watch that Lifetime movie, if only because I really want to see what they do with it. I mean, it seems like fans will be up in arms if they change it a whole lot, but I can’t imagine them airing something even remotely close to the actual book, either.

So, are you in for another round? I could definitely be down with co-reading another Gothic! Like possibly Angela Carter’s The Magic Toyshop, or Henry Farrell’s What Ever Happened to Baby Jane?, or Joyce Carol Oates’ Bellefleur? Then again, our commenters might have even better suggestions.

Jamie: I’m always down for reading and discussing books. ALWAYS. I’ve never read any of those and I have a list of books I always hear mentioned that I want to read, like Jacqueline Susann’s Valley of the Dolls…

Leila: Ooo, yeah. I’ve still never read Valley of the Dolls. Or Rosemary’s Baby, or Peyton Place, or Hell House, or or or….

What say you, commenters? Did you read My Sweet Audrina? Were you as fabulously horrified by it as we were? And just as importantly, what over-the-top eyeball-popper do you think we should read next?