If you’ve delved whatsoever into the world of books, at some point you probably learned about the destruction of the Library of Alexandria, which occurred either in 48 BCE, 270 AD, or 391 AD. Yeah, that’s a pretty wide field. I blame ancient chroniclers. For the purposes of this article, and because I choose to vent my wrath against Julius Caesar, we are going with the 48 BCE date.

FELLOW HUMANS. Consider this your Place of Mourning for the ancient world’s repository of knowledge, that temple of wisdom and learning, A TRULY KICKASS LIBRARY, and all that it both contained and symbolized.

THOMASINA: ….the enemy who burned the great library of Alexandria without so much as a fine for all that is overdue. Oh, Septimus! — can you bear it? All the lost plays of the Athenians! Two hundred at least by Aeschylus, Sophocles, Euripides — thousands of poems — Aristotle’s own library!….How can we sleep for grief?

SEPTIMUS: By counting our stock. Seven plays from Aeschylus, seven from Sophocles, nineteen from Euripides, my lady! You should no more grieve for the rest than for a buckle lost from your first shoe, or for your lesson book which will be lost when you are old. We shed as we pick up, like travellers who must carry everything in their arms, and what we let fall will be picked up by those behind. The procession is very long and life is very short. We die on the march. But there is nothing outside the march so nothing can be lost to it. The missing plays of Sophocles will turn up piece by piece, or be written again in another language. Ancient cures for diseases will reveal themselves once more. Mathematical discoveries glimpsed and lost to view will have their time again. You do not suppose, my lady, that if all of Archimedes had been hiding in the great library of Alexandria, we would be at a loss for a corkscrew?

WHAT DO YOU KNOW, TOM STOPPARD. With your…knighthood and your multiple Tonys and your Academy Award and your honorary doctorates from Yale, Oxford, and Cambridge. 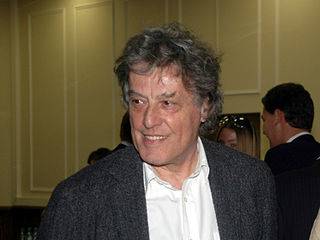 I grant you an honorary doctorate in being WRONG

For those who want more information, the Library of Alexandria came into existence sometime around 300-250 BCE. For those more geographically challenged (like myself), Alexandria is here: 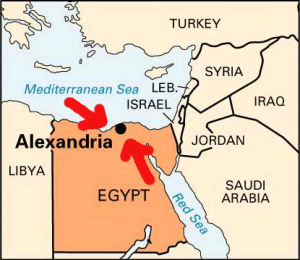 So, it was in Egypt. An Egypt that had a lot of ties to Greece at the time. The library was built in Alexandria’s Greek district. Under the rule of Ptolemy II (r. 285-246 BCE), more than 100 scholars were paid to do research, translate, copy, and generally enlarge the library’s collection. This included adding international works, which made the collection hella precious. If you showed up in Alexandria with new scrolls, you would take them to the library to have them copied and added to the archives. And lots of people showed up in Alexandria, because it was not only a port city on the Mediterranean, but also had a super famous lighthouse that was one of the Seven Wonders of the Ancient World. Which, y’know. That probably brought in some tourists.

IS IT OVERSTATING THINGS if one says a modern day equivalent to the burning of the library would be if the Internet just vanished one day? PERHAPS. But the Internet like the Library of Alexandria is an unprecedented gathering of knowledge from around the world — a place where scholars can congregate and use the immense resources at their fingertips to advance society.

This could be lost to the ages. Think about it.

WE MOURN YOUR LOSS, GREAT LIBRARY. A loss that can only slightly — oh so slightly! — be made up for in the awesome AU (alternate universe) stories that have been written about what would happen if you hadn’t been destroyed by dickhead Romans.

It’s with the angels now. Or, more likely, being carried around on the bottom of some Egyptian’s shoe. A learned shoe.