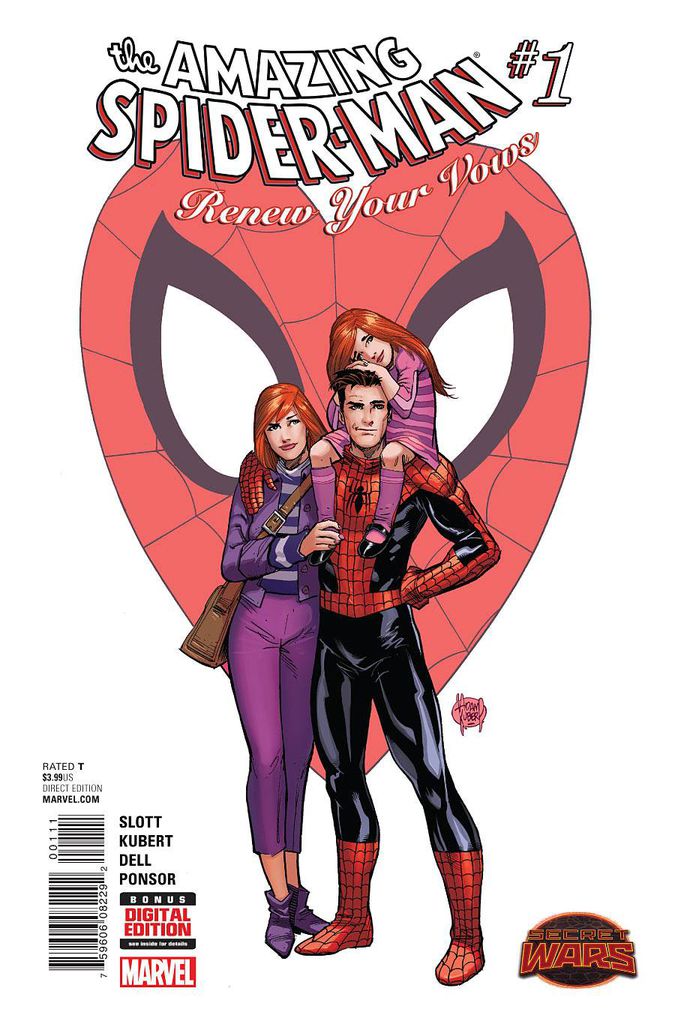 In a perfect world, this was how it was always meant to be.

This is how Dan Slott hooks us. Our first look into Peter and Mary Jane’s wedded bliss that was torn so easily from our hands during the events of – sigh – One More Day.

Full disclosure: The Mephisto thing? Not my favorite.

When we got our first glimpse of the Amazing Spider-Man: Renew Your Vows #1 cover several months ago, no less than eight friends sent me a link to the image of Mary Jane and Peter and their widdle girl. It’s adorable.

… On closer inspection, though, MJ and Pete both look more wry than happy. As if to say, “… Can we help you?”

And that’s kind of what this issue is. It’s about MJ, Pete, their family, and their business. It’s awesome.

In Renew Your Vows, we get a ton of classic Spidey, Mary Jane, and their daughter Annie on whatever corner of [a perfect] Battle World this is. Notice I said Annie. Not May. This is no May Parker. This is, presumably, the future Peter should have had. Just… don’t think too hard about it. It will, in typical Secret Wars fashion, make your head all splodey-like.

Dan Slott’s given us all sorts of Peters in this issue: quippy, angry, bumbling, and downright unsettling. He’s also written at least one Peter we’ve never seen before. And we get a strong and capable Mary Jane who grows into the kind of mother we might expect. I was pleasantly surprised at how he subverted my expectations when it came to her storyline.

And oh, the art! Adam Kubert, John Dell, and Justin Ponsor have painted a dynamic and exciting world for readers. It gets a tad messy at times, but I think it lends itself to the frenetic pace the comic ends up setting as we turn the page. Also, thank you to whoever decided to put Annie in her tribute onesie, because it is the cutest.

Renew Your Vows #1 doesn’t make up for what was lost in One More Day. I realize I’m talking about their relationship like I was in it. That’s because as readers, we all were. And One More Day erased an important milestone in Peter’s history and our own reading history. That being said, this is a good start to give us a glimpse of what we missed out on. What Peter and Mary Jane missed out on. And I appreciate that.

Without spoilers, I will say there is more to RYV #1 than the Parkers. Other superheroes are disappearing or ending up killed, and it sounds intense… but it’s all kind of a backdrop to what’s really important. They’re relegated to a B-storyline. (And if I sound flippant, it’s because so far Secret Wars has shown me that multiple iterations of the same character exist. So they might be dead on this world, but not everywhere.)

Suffice to say, there’s a lot going on in this issue, and it ends with a bang loud enough that I’m glad we only have to wait two weeks for the next one.