Earnest preamble: I am fully aware of the dangerous, sexist subtext of the Beauty and the Beast story. The message that if a woman is truly good, she can change the nature of an angry, selfish, abusive man is a terrible one. The message that a good woman is valued for her physical beauty while simultaneously being expected to look beyond a man’s imperfections is a terrible one. These are not messages I would want any woman or girl to internalize. There are many powerful, important pieces of writing that detail or evoke exactly how incredibly problematic this story is, and I fully encourage everyone to read them.

In the spirit of unabashed Bad Feminism (™ Roxane Gay), I will admit that Beauty and the Beast stories are totally and completely my weakness, due to an early-age identification with the animated Belle (thanks, Disney!). I suspect I am in no way special in this regard. I have read or watched literally dozens of Beauty and the Beast retellings or adaptations (and for the record, turned out pretty great with lots of self-esteem and healthy relationships). The following is an evaluation of only a small handful of the bookish Beauties and Beast stories of my fictional acquaintance. 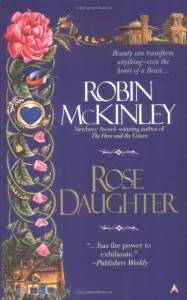 This Beast, as it turns out, wasn’t cursed because he was selfish or cruel, but because he is actually a wizard whose magical theories were getting too real for the wizarding Establishment. His lack of a terrible flaw, sensitive, artistic sensibilities, and basically mild nature seem at odds with the very fact of his taking her prisoner in the first place, and make for a very strange Beast. Not quite as strange, however, as the solution to the not-growing roses which (spoiler!) turns out to be part “true love” and part “golden unicorn fertilizer.” I kid you not (see above, re: magical weirdo). This kind of thing is why I never regret reading a McKinley, even though this slow read isn’t my favourite retelling of the Beauty and the Beast story. 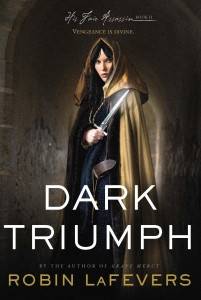 This is the second instalment in the His Fair Assassin trilogy and while, to the best of my knowledge, neither of the other two books are retellings of fairy tales, when a story features a young, beautiful woman and a huge, hulking man nicknamed “Beast” and a woman called Sybella, it’s pretty obvious where its influence lies. This is easily the darkest version of this (often quite dark) story I have seen geared towards young adults. Neither the characters nor the relationship are simple, and the book tackles challenging topics of sexual abuse, mental illness, and death. In this iteration, he’s a brutal but well-respected soldier, she’s a fierce trained assassin, and they essentially bond over their shared love of killing baddies. Although the Beast is the physically ugly one, it is Sybella who, after years of horrific sexual abuse, has been made to feel like a monster. The purpose she finds in her work in service of a monarch she respects, her friendship with fellow assassins, and most importantly, the love and respect she is given by the Beast, are transformative. 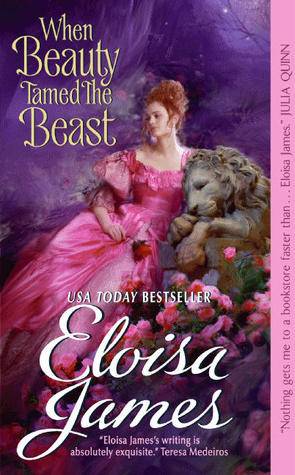 Eloisa James famously based her hero, Piers Yelverton, on Hugh Laurie as Dr. House, so obviously the Beast in this excellent Regency-set romance novel is an snarky, arrogant doctor with a limp (no motorcycle though, as they have not been invented yet).  Piers is also widely but delicately rumoured to be, ahem, lacking certain manly abilities (non-spoiler: not for long!). The Beauty in this novel is Linnet, a well-born woman whose charmed life comes crashing down when she is kissed and spurned by a Prince, and then shows up at a party in an unflattering dress that makes her appear in the family way. Suddenly, Linnet is a social pariah and worst of all, unmarriageable.

An unwed, pregnant bride, however, is exactly what Piers’s father, the Duke of Windebank, believes he needs, so the Duke strikes a deal with Linnet’s father and suddenly she is packed off to live in a remote castle with a famously grouchy, impotent man. Seems legit! A+ parenting there, guys. The fact that Linnet is not exactly the Beast’s prisoner so much as an essentially ruined woman with nowhere else to go makes the romance and eventual steamy interludes much more palatable, but more importantly, it’s interesting commentary on the limits of female agency in the oft-romanticized Regency era. By making the technically-still-virginal Linnet a social pariah, James subtly underlines how unmoored the concept of “sexual purity” is (and always was) from reality, and highlights how much of this incredibly important standard of judgement was outside a woman’s control.  To top it all off, this version of the classic story even gives the “Beast” character an opportunity to demonstrate his lack of superficiality.

Of Beast and Beauty, Stacey Jay 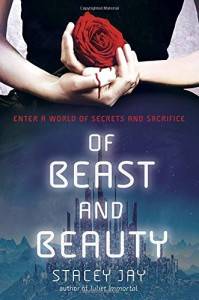 This is a fantastic YA gender-swapped version of the Beauty and the Beast story set in space. With magic. Those of you who have read my shut up and take my money post will hear alllllll my bells ringing. It’s hard to assign the roles of  “Beast” and “Beauty” to one character, but if we define the “Beast” as the one who holds the other captive, then the usual gender dynamics are inverted here. Gem, a rebel from the starving, brutally-oppressed outsider people is the prisoner of the lonely, doomed, and blind Princess Isra. Of all the versions of this story I have read or seen, this is the one that treats the imprisonment and inherent power differential the most seriously, making the road to romance for these two long, winding, and fraught, yet ultimately more rewarding.

As for the question of who is “beastly” in terms of physical appearance, well, that is slightly more complicated. Suffice to say that even though each of the two characters finds the other repulsive at the beginning of the story, neither of them are truly monsters. In Jay’s book, beastliness is tied up with issues of race and otherness: both characters discover that when you are taught from a young age to view the Other as less than human, virtually any action they take can be used to support your view of their monstrosity, and any between you and the Other is cause for self-loathing.

#Genre Kryptonite#beauty and the beast