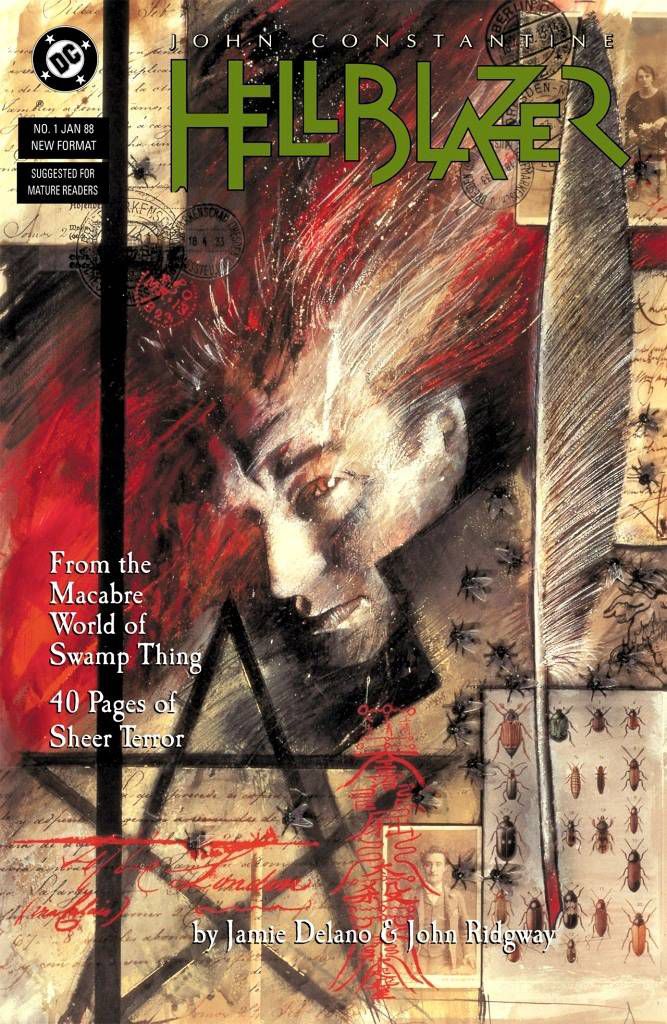 While our recaps of NBC’s Constantine may be over, we (Dave and Jay) still want to talk about one of our favorite characters, John Constantine, Hellblazer. We’ve decided to re-read the entire series starting with the first issue and going… well, let’s take this a week at a time, shall we?

We invite you to read along with us and share your thoughts and reactions.

Dave: Fresh off the presses in 1988, the first issue of John Constantine, Hellblazer. At this point in time, Constantine has been introduced as a shadowy, smirking working class magician who popped up in Swamp Thing knowing more about Swampy’s elemental condition than the creature himself. But now he’s got his own comic. So how do you turn an mysterious, elusive character like John Constantine in the protagonist of a book?

What Happens in This Issue:

An overweight post office employee can’t stop eating. But when he dies… it’s as though he starved to death. John Constantine returns home to London to discover an old mate, Gary “Gaz” Lester holed up in his flat suffering from heroin withdrawals. John discovers that while in Tangier, Gaz exorcised the demon from a boy and bottled it. Now he’s suffering a terrible hunger, and he has sent the bottle to New York. Constantine tracks down the shaman who bound the demon to the boy to learn more about it, and then he goes to New York to enlist the help of the Haitian voodoo priest Papa Midnite. He encounters the ghost of an old love, long dead, and he finds the demon Mnemoth in a church, but he is forced to flee.

So, What Did We Think?

Dave: I like the heavy narration that Moore began with in Swamp Thing and will eventually become kind of a staple of the early Vertigo line. “Henry Wambach doesn’t feel so good. Something black and hungry nestles in his gut.” And then when he get to Constantine, the narration adds to the “PI” feel of the book. We’ve gotten away from this type of narration in comics, so I kinda dig reading it again.

Jay: It reminds us of the reason for the trench coat, really. There was a part of early John that was a throwback to Chandler and Hammett, and the old detectives. It’s also interesting to go back and see that this version of John is different to the one we think of. He’s not grubby, not scruffy. He wears a suit, and the trench coat is a bit more of a practical choice, something he wears outdoors, than a costume.

Dave: Yeah, I think the scruffier John comes along later — I know I really associate him with the Garth Ennis run.

I like Chas’ introduction as a guy who owes John, so will get him heroin to get Gary high. John also gets a great line about Gary: “Last I heard he was in Morocco doing the William Burroughs bit. Y’know, junk, boys, and general weirdness.” Can’t imagine that’d ever have made it even close to a script for the Constantine TV show.

Jay: I notice he leaves off the bit about Burroughs killing a woman and getting away with it, but, you know, this is John we’re talking about.

Dave: I also dig the detective story element in this issue. I’ve always liked supernatural mysteries because it’s about following the clues into a strange world that we don’t really understand. John learns the tattoos are a binding, so he tracks down the shaman, and he calls up Midnite because he’s going to need his help in New York.

Jay: Yeah, it works very well here. One of the things you need to do when writing ’normal’ PI fiction is to find reasons why the client can’t just go to the police. It always involves some extra leg work or bending of logic. But here, in a world with magic and beasties, well, the cops don’t deal with that. A PI makes total sense in this world.

Dave: Heh, maybe that’s why I’ve always gravitated toward these types of stories — its this doorway into another world where things like “going to the police” only lead to dead-ends.

Jay: Something else I noticed, is John buying Silk cut cigs. You know, I’d forgotten this little detail, but when I first started to smoke, I smoked Silk Cut, and maybe it was because they were John’s brand. It certainly wasn’t because of the taste or quality.

Dave: Ooh, I had forgotten about that. Having never been a smoker, I do remember always wondering what Silk Cut meant, exactly.

I like the segment where John travels to Sudan. It reminds me of elements of The Exorcist movies, but I also want to note the coloring. Everything is colored in yellows, pinks, purples, oranges. John steps into a hut with a shaman, and the color darkens to red. Then John and the shaman trip together and we get some fairly twisty panels (clearly inspired by some of the innovative layouts in Swamp Thing at that time).

Jay: I loved the look of this section. So interesting. And the flashbacks early in the issue, when John is learning of Lester’s failed attempt at an exorcism. It was so well done.

Jay: You know what? I totally heard Matt Ryan as I read that. He’s got into my head.

Dave: I can see him pulling that off.

John faces off against a zombie by smacking him in face and threatening him. Apparently voodoo zombies don’t have much willpower. I love this — it sort of subverts the fear of the whole zombie concept, while showing that so much of dealing in the world of the occult is just knowing the rules. It’s not always a bunch of spells and mystic artifacts.  Thus far, all John’s done in this issue is use hypnosis, take a hallucinogenic drug, and slap a zombie.

Jay: I liked that they went back more to what Zombies were before George Romero. I mean, I love Romero films as much as the next guy (unless the next guy is Tom Savini) but they changed what we think of when we hear the word. This guy is more old school, more of a mystical slave, and that helps to set this world apart from cinema and pop culture.

Dave: I’m not sure if this is Delano’s intent, but I really enjoy the scene toward the end of the issue with Emma’s ghost. We don’t really know if this is an actual ghost or just John’s imagination. That’s kind of my favorite way to treat ghosts, since in literature “real ghosts” often just represent guilt or baggage in some way anyway. So I like that it plays both ways here.

Jay: One of my favourite versions of this was Due South, did you watch that show?

Dave: I never caught that one.

Jay: Benton Fraser’s father is murdered in the pilot episode, but then a couple of episodes in, Fraser gets into a car and his dad is sat in the back seat. “Dad….are you?” “Still dead, son.” They play it straight, with just the slight undercurrent of deadpan humour, and they never say for sure whether he’s a real ghost, or weather it’s a figment of Fraser’s imagination. It’s a fun game to play, as long as you always use it sparingly enough that the question doesn’t distract from the story.

Dave: How about that ending? John running from the demon, leaving a hapless priest to be consumed by the hunger, pushing him to attempt to devour Jesus on the Cross, hanging over the church’s altar.  Another thing they’d never get away with on the TV show…

Jay: WHAT an ending. You know, after all this time of “knowing” John Constantine, and seeing all the variations on how hoe tricks his way out of things, I kind of thought I knew where this would go. I’d forgotten the ending, so I was thinking we’d get a con, or a trick, or john giving someone the finger. But this was so much better. I’m excited, because it’s been long enough since I read these stories that I don’t remember the details.

And there you have it — the first issue of Hellblazer! If you’re reading for the first time, or re-reading along with us — let us know your thoughts!