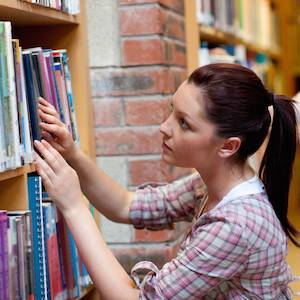 I took a look at the world’s best-selling books and book series of all time, according to Wikipedia’s list, which they admit is “an incomplete list that may never be able to satisfy particular standards for completeness.” To be fair, I’m pretty sure that no list of best-selling books can be complete, ever.

Before we get going… which do you think is the best-selling book of all time? (The Bible and The Koran don’t count since, well, we’ll never know). I think the answer will surprise you. It certainly surprised me.

Here they are, the best-selling books of all time, according to Wikipedia. (Numbers are in millions of copies sold) 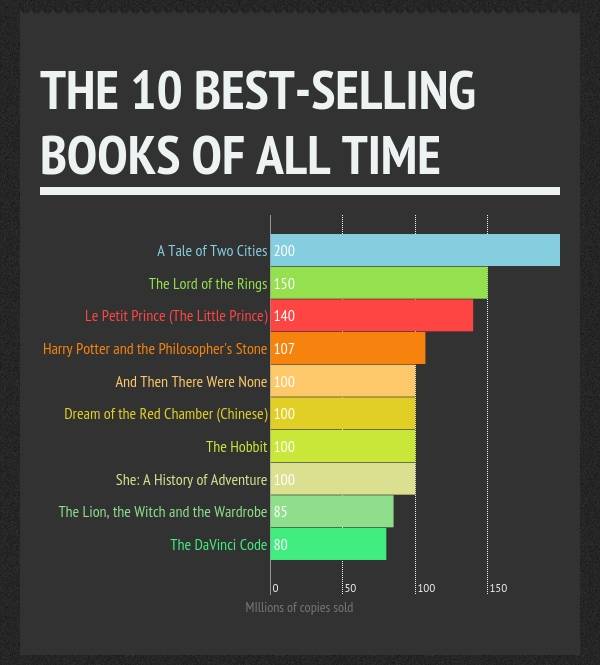 There are so many interesting things to note here. First of all… Dickens rocks! The fact that A Tale of Two Cities sits at the top of this list is fantastic and astounding and unbelieveble and gives me hope for the human race. I also suspect that its age gives it a bit of a head start and that it is probably mandatory reading (and buying) in some parts of the British elementary school system.

Now, let’s take a look at the best-selling book series of all time where, not surprisingly, J.K. Rowling is queen of them all. 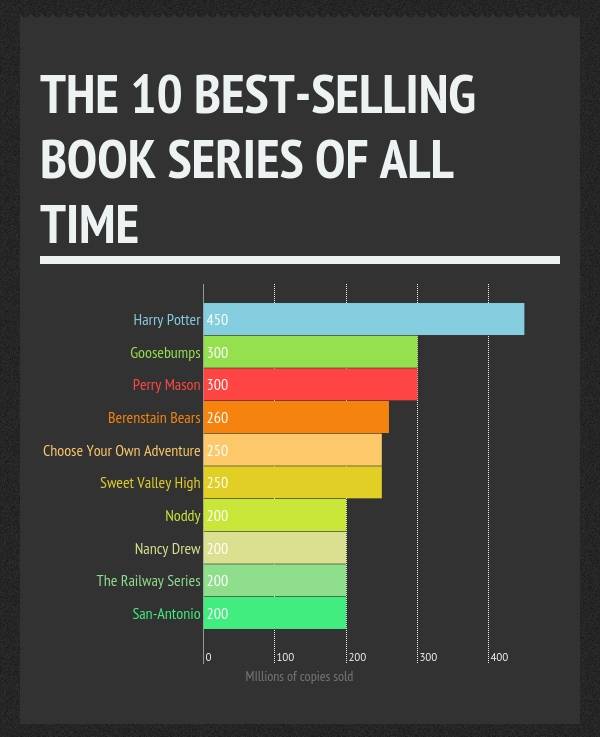 Now. If we were to add together sales of The Lord of the Rings and The Hobbit, arguably a series, they would fit in right around the middle, with 250 million books sold. The way that The Hobbit is selling now (top 5 on a few genres on amazon) means that it may actually be approaching the 300 million mark as a series.

I was surprised to see series there that I had to look up; Perry Mason, The Railway Series and San-Antonio, I expected to see only series that were radily familiar.

However, I think that the clear winner over the last decades is Ms. Rowling, by a surprisingly large margin. 450 million copies of the Harry Potter books sold.

But remember kids, Mr. Dickens is still the king. “A Tale of Two Cities has sold more than 200 million copies to date, making it the bestselling novel—in any genre—of all time.” – David Mitchell in the Telegraph

I’m going to guess that there is either a copy of a Harry Potter book or A Tale of Two Cities in your house.