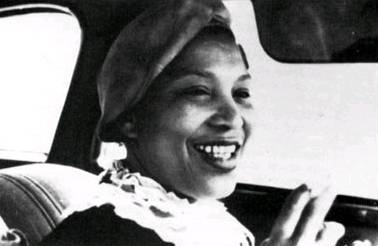 Today would have been Zora Neale Hurston’s 123rd birthday, so to mark the day, below is the Reading Pathway I wrote for Book Riot’s Start Here.

Their Eyes Were Watching God so dominates Hurston’s work that many who love it haven’t read anything else by her. The novel is a marvel, to be sure, and if you are only going to read one thing by Hurston, then it is the indispensable work.

But Hurston offers other riches to be treasured, primarily her short stories. Short stories and invented parables suit her the best, as they combine her love of folk stories with her brevity, humor, and gift for endings. The following sequence points toward Their Eyes Were Watching God, but with a particular focus on two of Hurston’s thoroughgoing concerns: male-female relationships and the effects of American racism on the relationships between black people.

In this essay, first published in The World Tomorrow and now widely anthologized, Hurston describes how she experienced her blackness. Growing up in the all-black town of Eatonville, Florida, Hurston says she didn’t even realize she was black until she was about 13. The essay seems revealing: Hurston is candid about feeling most black while in college in New York, and the essay ends with a racial metaphor that indicates being at peace with her racial identity.

You would be wise to be on your guard, though. Hurston is wily. Ever the trickster-performer, Hurston is perhaps at her most inventive and elusive when telling the “truth.” Her autobiography, Dust Tracks on the Road, contains quite a bit of misinformation, and Hurston is in the business of creating rather than revealing herself. So the careful reader will see this essay as a performance as well, one that may or may not show Hurston herself. And to a degree, it doesn’t matter if it reflects a real consciousness or not, because it does reveal an imagined consciousness, one that many of her characters, especially the women, seem to always be struggling toward.

Hurston’s short stories set in and around Eatonville are my favorite, and if pressed I might prefer them, collectively, to Their Eyes Were Watching God. (Fortunately, such pressing is only hypothetical.) In “The Gilded Six-Bits,” a young working class couple, Joe and Missy May, has carved out a niche of happiness for themselves, with Joe working hard at the lumber mill during the day, and coming home to industrious, loving Missy May. His daily return is heralded by the clatter of his pay on the porch, the few coins both an offering and paid admission to their quiet domesticity.

The transactional nature of this act, though, causes trouble when a wealthy new citizen, just in from Chicago, opens an ice cream parlor in town. Otis D. Slemmons (Hurston is magical with names) struts his affluence, and Missy May becomes interested in his resources — and in him. Drama ensues. I’d like to make a comment about the end of the story without giving it away (too much) because it leads into the next story in this sequence. Maybe this is sufficiently vague and yet still interesting way to put it: not all of Hurston’s unhappy endings are unhappy and not all of her happy endings are happy. If we call something “bittersweet,” does that mean it’s good, bad, or both? That sort of provocative ambivalence pervades Hurston’s fiction, and anticipates the work of Alice Walker, Toni Morrison, and others.
3. “Sweat” (1926)

In his landmark biography of Hurston, Robert Hemenway placed “Sweat” among the first rank of her fiction and thought it the best of what she wrote during the Harlem Renaissance. It’s another story of a marriage, though an unbalanced, venomous one. Delia shoulders the financial responsibility, and her husband Joe resents it. He is the worst kind of no-count — the kind that masks his laziness in moral protestation.
Delia, playing the dutiful wife to a loafer, puts up with it and his physical abuse. Joe eventually can stand the situation no longer and plots Delia’s murder. In an Aesopian twist, his machinations fall back on him. In a gripping final scene, we see how Delia has changed, and by extension what the limits on being “the good wife” should be. Hurston is ever-circling the question of what it means to be a good woman. Does one need a husband? And what kind? How to be with someone in a violent, unjust world? How much of yourself should you be willing to cede to someone else? Everything? Nothing? It’s a question at the heart of Their Eyes Were Watching God, though complicated further still.

This novel is so rich and layered that there are dozens of useful approaches to it, including seeing the story as a meditation on living your life with, for, and through, someone else. Toward the end of the novel, Janie, the protagonist, falls in love with Teacake and finds with him something like contentment. It doesn’t last long, as events, including a hurricane, conspire against their happiness.

Hurston wrote in Dust Tracks on the Road that Janie and Tea Cake were based on her relationship with a man named Percival Punter, which ended a mere weeks before she started writing Their Eyes Were Watching God. As I mentioned before, I get suspicious of Hurston in these moments. (I mean, the name alone makes me wonder how much of the truth we are getting.) Janie and Tea Cake’s happiness is so fleeting and so removed from normal life, that it calls into question the viability of such happiness at all. (I warned you that Hurston can’t ever leave the pot unstirred.)

Janie’s truest happiness, at least as she understands it, with Tea Cake comes after his death. Only in memory, and an invented memory at that, does fulfillment come. Judge for yourself: what kind of happiness is this?

“The kiss of his memory made pictures of love and light against the wall. Here was peace. She pulled in her horizon like a great fish-net. Pulled it from around her waist of the world and draped it over her shoulder. So much of life in its meshes! She called in her soul to come and see.”

While you’re on a Hurston kick, pick up a Their Eyes Were Watching God t-shirt over at the Book Riot store! 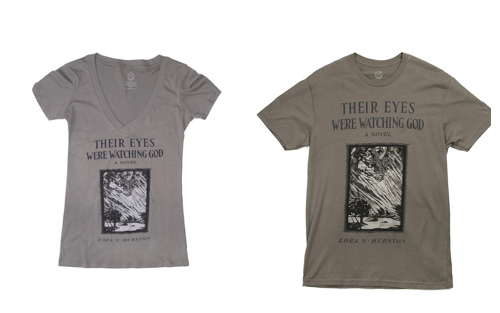