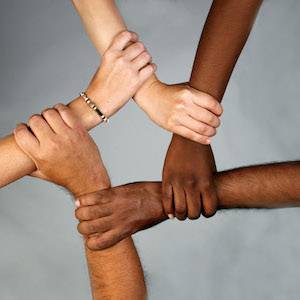 This post has been overdue since a grand jury in Ferguson, Missouri voted not to indict police officer Darren Wilson in the August murder of teenager Michael Brown. It was overdue the day a grand jury in New York City, where I live, voted not to indict police officer Daniel Pantaleo in the July murder of Eric Garner. Let us say for the sake of simplicity that I have been at a loss for words.

I have been thinking a lot in the last few weeks about the inability of language to encompass a grief that is as large as a culture and I have been thinking of the writers who choose to use language to give a shape to hope, and to naming a world we want to live in and the ways in which the world we are asking for is unlike the world we have been given. And when I skirt the edges of despair I think about how despair is a discredit to the people who do, who have done, who will continue to do, the work of resistance and of demanding justice; how succumbing to despair means I do not deserve to count myself among them. “We, you, I cannot allow ourselves to expect news like this,” writes Mairead Case, “just as we cannot allow ourselves to be unprepared for it.” Remember: language is also a record. A history. A war.

And so, what I’ve been reading: “Deep, deep, deep down I know that dream was never mine”: Audre Lorde and James Baldwin in conversation, 1984. “There is no way on earth that a 15-year-old black child visited by police officers at school for walking through a library while black is going to be OK. And neither are we”: Kiese Laymon on teaching at Vassar while black. Everything Mariame Kaba ever writes, but right now this especially. Audre Lorde again. And again. “We often can’t imagine that things could be different because we can’t imagine alternative systems”: Walidah Imarisha on speculative fiction’s potential to envision another world. Glenn Ligon. “If they can believe in change, surely I must at least try”: Roxane Gay on Ferguson. “You do not get to regulate my liberation”: Danielle Stevens on Ferguson and the neglect of Black women, femmes, and girls.

There are literally hundreds of police officers in Union Square, two blocks away from where I am writing this now, refreshing Twitter at work as protests mobilize, as hope and resistance turn into movement, into bodies standing together and refusing to back down. As grief becomes language becomes action, action becomes language becomes grief. Here’s to hope. And now it’s time to go outside and fight.