Tis the season of getting the hell out of wherever you live, especially if where you live just hit -20C. I am in Cuba as I write this (the luxurious life of extremely part-time internet writer is luxurious) and reading The Hitchhiker’s Guide to the Galaxy. It was almost completely the wrong book to bring. 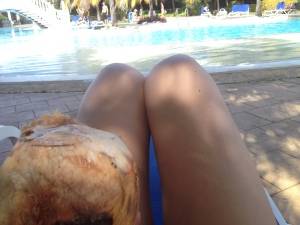 Hot dogs or legs, you guys. Are these sandy, lightly-freckled hot dogs with like a really tiny coconut? Or are they legs. I…am not good at this game.

The Hitchhiker’s Guide (henceforth HHG), though INARGUABLY DELIGHTFUL, isn’t working for me. It has a sort of sustained and unvarying silliness best taken in small doses. It’s like watching a ten-hour Monty Python marathon; about two hours in, the nonsense loses its lustre.

And at home I would be like, chapter of this, chapter of something less deliberately ridiculous. But I’m in communist Cuba and, although the wireless is totally going to be working tomorrow (and tomorrow and tomorrow), this is the only book I have today. Which, fiiiiiiine, I have aquamarine waters and unlimited booze and my husband and the one of my children who can’t yet talk and a giant chess set. But a better book would really ice this cake. Here’s how to not do as I did.

VACATION READS SHOULD HAVE:

HHG is ullllmost 900 pages, so it meets a need there. I read it the entire seven-hour plane ride here, and three days in, am still reading it. But length (when not in ebook format [which mine totally is, I’m not an idiot]) is countered by heft. You gotta put that bitch in your carry-on or beach tote. In the days before ebooks, I dragged a paperback of Les Mis around Turkey and Greece. For all that book’s faults (weight being one of them, supreme boringness another), it at least took me three weeks to read.

HHG is, ok, not at all gripping.

I hate to say it but.

There’s a plot. I concede Presence of Plot. But even HHG isn’t pretending that its plot is the point. People are here in space, people are there in space, a joke is made about irony and tea, the Earth is demolished, the Earth is retroactively no longer demolished, Marvin says something morose, and repeat. Being largely plotless, HHG offers no incentive for me to pick it up again. I could stop right now, two-thirds in, and NEVER CARE WHAT HAPPENS NEXT. There’s no mystery to solve, and I don’t care if anyone dies. I’m at an all-inclusive, which means I am at all times a little bit drunk. I need ACTION and MOVEMENT and ENDGAME or I’m going to take a drap (drunk-nap).

3. Per me being a little bit drunk: comprehensiveness.

That ain’t right tho, that means something else. Comprehensability. Whatever, squiggly red spellcheck underline, that is completely a word. (Edited to add: Word cedes the point, but contends that it was spelled wrong. Comprehensibility.) There are a lot of not-word words in HHG. I can no longer handle a sentence like ‘In ancient days, before the advent of the Sorth of Bragadox, when Fragilis sang and Saxaquine of the Quenelux held sway…’ I didn’t even read all of that as I was TYPING it. I’ve had like five Miami Vices today (it’s, like, coconut something and then strawberry slush and somehow they get rum in it) and I only recognize words that are words.

‘Beach reads’ is a genre with a disproportionate amount of curly fonts on the cover for a reason. I don’t mind a Message in my vacation reads the same way I don’t mind eating some of the cucumber salad, but I also need a meat stuffed with another meat, or some kind of sugar-encrusted bread. If a book is going to be about Big Pharma or climate change, it also needs to have things blowing up or people making out.

This is really the only way you can completely nail points 1-4. (I have, for the record, already read HHG. My should-have-known-ingness knows no bounds.) One time I packed the Jason Bourne books for what we’re going to call a Hospital Vacation, and looooooord they were boring. (I mean, the first one was. I mean, the first two-thirds of it were. I cannot personally speak to the rest.) But the movies are amaaaaazing, how on earth could I have known that the books would be so plodding? So unless you have an infallible book-recommender-person, bring along something you’ve already read and don’t mind reading again. I should have downloaded The Woman In White. I know Victorian sensation novels aren’t everyone’s G&T, but that fucker has plot for days.

How do you pick your vacation reads? What books go well with sand, sun, and kind of a watery beer but it’s all you had in your mini bar and you didn’t have to put on pants and you were probably dehydrated anyway so it’s for the best?