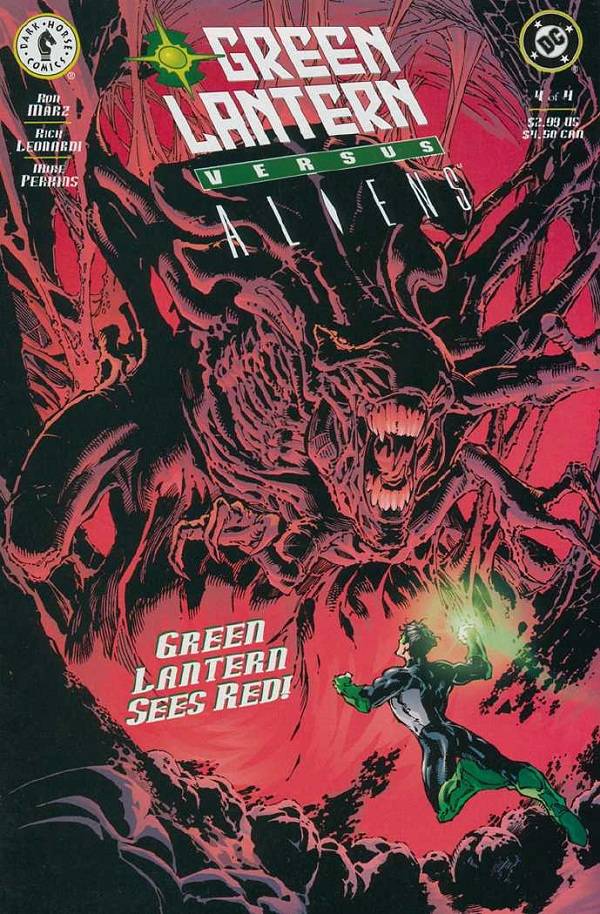 In space, no one can hear you scream unless that person is in the same green bubble you’re in, which you’ve created with your will-powered ring given to you by a race of big-headed blue men. Such was the case the only time the members of the Green Lantern Corps met the group of cinematic Xenomorphs otherwise known as Aliens.

The Green Lantern Corps are the cosmic-menace-battling heroes of the DC set. They’re a group of intergalactic cops, pulled from all corners of creation by a self-appointed group of overseers named the Guardians of the Universe. The Corps each patrol their sector of space, protecting the innocents in their area with their green rings which create anything they will into existence. These rings also protect them from from the vacuum of space. Xenomorphs, meanwhile, are a race of exoskeleton-bearing aliens who are known for their tendency to be birthed by bursting through a host’s chest, having acid for blood, and for creating hives.

Up until the late-1980s, Xenomorphs were relegated to the big screen only. They’d appeared in 1979’s Alien and 1986’s Aliens but that was it. In 1988, Dark Horse Comics got the license to tell new stories about these creatures in comics form, which they quickly did. Several Aliens comics were released over the next decade, many of them crossing over with other franchises. Then, in 2000, the Green Lanterns finally met this intergalactic menace.

A four-issue miniseries written by Ron Marz, penciled by Rick Leonadi, and inked by Mike Perkins was released. Titled Green Lantern Versus Aliens, its first issue told the tale of Hal Jordan, DC’s main Green Lantern from 1959 to 1994, meeting the Xenomorphs. This appeared to be the first time any member of the Green Lantern Corps ran into this particular kind of infestation. With his power ring, it wasn’t hard for Hal and a few other members of the Corps to easily eliminate the Xenomorph threat. Instead of wiping out the herd, Hal decided to transplant every last creature to Mogo, a living planet and the largest member of the Green Lantern Corps. Mogo would contain the threat without destroying a single living thing. It was an elegant, simple solution that worked as long as the Green Lantern Corps remained in place.

But, thanks to Hal Jordan and a force known as Parallax, the Green Lantern Corps soon fell. Every power ring held by members of the Corps stopped working. Only Hal’s former ring remained powered and it fell into the hands of Kyle Rayner, graphic artist and resident of New York City. That meant that when a group of former Green Lanterns learned that a vessel had crashed onto Mogo near the Xenomorph colony, the only person they could turn to for help was Kyle. Lead by Salaak, a former Green Lantern who’d accompanied Hal on the original mission, that’s just what they did.

Kyle took the group with him and they quickly made their way to Mogo. It should have been an easy mission. All they needed to do was grab the crew members who were still alive, put up a big orbiting “Warning” sign for future spaceships, and head home. Hal Jordan had no trouble using his ring to do something similar during his first run-in with the Xenomorphs. It should have been a piece of cake.

Unfortunately, things went belly-up almost immediately. A squad of the Aliens grabbed members of Kyle’s contingent and began to drag them down to their lair. Instead of using his ring to whip up some energy tongs to grab them back or a boxing glove to punch the Aliens in the face, Kyle stupidly attempted to grab his ally with his hands, causing his ring to slip from his finger and become lost in the Xenomorph’s cavernous hive.

There was really no other way this story could have played out. The Xenomorphs, while tough and insanely frightening, are really no match for the powers of most super heroes. Green Lanterns, with their ability to create literally anything they can think of, should be able to handle this threat without a hitch. Only by de-powering a hero can this type of story take place. It also shows a hero’s true nature. It’s easy to do the right thing when you’re ridiculously overpowered in a situation. It’s much tougher when you’re fighting an uphill battle that will probably result in your death. Making Kyle loose his ring is Dramatic Storytelling 101.

Kyle pushed further into the Xenomorphs’ liar alongside the remnants of the crashed ship’s crew and the former Lanterns who were still alive. Without those people at his side, Kyle would have died several times over.

The missing power ring was finally found at the feet of the Xenomorph Queen. After a struggle and several sacrifices, Kyle regained his abilities and quickly cleaned house. While he had the choice to save the Xenomorphs as Hal had done years early, this new Green Lantern choose to mow them all down. His choice seemed to unsettle him later, but this proved he was a decidedly different kind of Lantern than the one who came before him.

For a story that is so bogged down in continuity, what with it being connected to both Hal Jordan and Kyle’s times as Green Lantern, it was a bit surprisingly that later Green Lantern stories ignored it. During the course of this series, former Green Lanterns with names like Ash, Brik, and Salaak were all killed by the Xenomorphs. However, all three turned up alive and well years later when the Corps was reformed after Hal Jordan’s return to heroism. But these things tend to happen in intercompany crossovers. Their consequences don’t stick.

The Xenomorphs would return to battle other members of the DC Universe over the years, but few of these crossovers felt as natural as this pairing. Don’t worry. We’ll get to those stories eventually. There’s plenty more where this came from.