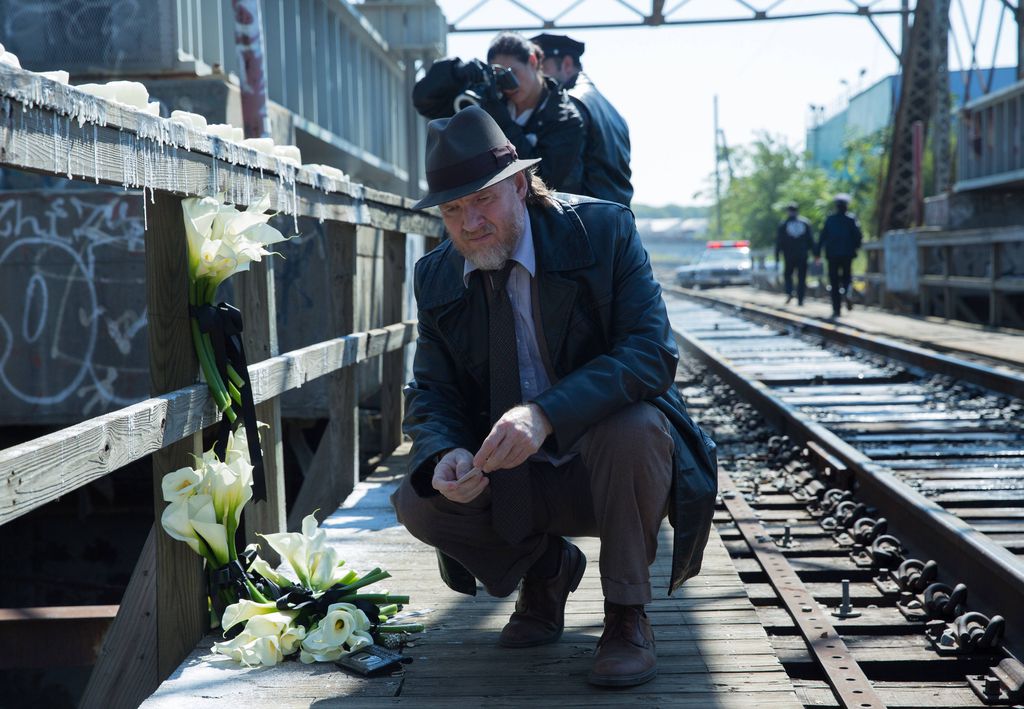 Last week on Gotham, the show took its first step into a larger world with the introduction of a superpower to the show through the use of a drug called “Viper”, an early version of the “Venom” that Bane will eventually pump himself full of to gain super strength and break Batman’s back. While I wouldn’t call episode 5 and improvement per say, I do think the show found a tone that I found entertaining in its absurdity. This week, Supernatural and Firefly writer (and The Tick creator) Ben Edlund pens his first script for Gotham and it’s something I’ve been looking forward to since finding out he joined the writing staff. In my opinion, Edlund wrote some of the best episodes of Supernatural, never failing to turn in a memorable script, even when the overall quality of the series was at an all-time low (I’m looking at you, Season 7). He tends to be a writer you can count on, so I’m desperately hoping that “Spirit of the Goat” ends up being Gotham’s first legitimately great episode.

Will Edlund pull it off? Let’s find out!

“I’m only two days from retiring, what could possibly go wrong?”

We open with a flashback (a first for the series) to ten years ago when a serial killer known as “the Goat” was terrorizing Gotham by killing the first born in rich families. Bullock and his then partner Detective Dix arrive at the abandoned theater where they believe the suspect has his latest victim. Dix calls backup and wants Bullock to wait for them to arrive before going after the suspect. But this isn’t the hard, cynical Harvey Bullock we all know and are lukewarm to in the present, this is rookie hero cop Harvey Bullock who rushes into danger at the drop of his white hat. They find the suspect (named Milky for reasons I imagine have something to do with his that-kid-from-Powder-like complexion), Dix is taken out, and Bullock takes Milky down with a round of bullets to the chest, but not before Milky claims that his body is only a vessel for the “spirit of the goat” and it will return when it finds another. Case Closed, right?

Not so much. As it turns out, we’re back in present day and Bullock as at the scene of a copycat killer using the same M.O. as Milky. Gotham has a Copy Goat. Harvey’s ready to hit the ground running with the investigation, but Eddie Nigma smugly/annoyingly points out that Gordon hasn’t come into work yet. Where is he? Turns out, he and Barbara are having a followup conversation to the argument they had a couple of episodes ago. You remember, when they totally broke up forever? Apparently that wasn’t entirely accurate. Barbara still wants to be let in on whatever Gordon is hiding from her, and he still wants to protect her from it. So the argument is the same, but the tone is much more civil and evenhanded. Gordon wonders if everything is okay between them and Barbara says that they are “negotiating terms”. Because, you know, nothing screams “healthy relationship” like comparing it to contract negotiations.

“Don’t you have a file clerk to bother?”

MCU Detectives Renee Montoya and Crispus Allen talk to a homeless guy on a dock who claims to have seen Gordon shoot Cobblepot. They finally have enough to arrest Gordon for the murder of the Penguin, and they’re really stoked about it. Meanwhile, Gordon and Bullock interview the victim’s parents and meet their family therapist who shoos them away. She claims that they aren’t in any kind of mental state to deal with this kind of trauma, pointing to a tick that Mr. Hastings is exhibiting (in which he clenches and unclenches his fist) as proof. Bullock doesn’t like or trust psychiatrists, and thinks that she’s just pumped them so full of tranquilizers that they can’t think straight.

And then we meet a file clerk named Kristin Kringle who we know Nigma has a crush on because he sniffs her as she walks by him. You know, like any normal human being might do. She obviously finds him creepy and annoying (with good reason) and tries to leave the file room as Nigma criticises her file organization technique. She tells him not to mess with her files because she has them exactly like she wants them, but of course he reorganizes the whole room while she’s gone. Because his way is better, I guess? I image this is probably part of some kind of elaborate mating ritual for him, but it’s definitely not working because women are the ultimate riddle. Or something. Probably. I just really don’t want to see this storyline evolve into a Riddler-as-a-stalker kind of thing. Isn’t that the Mad Hatter’s M.O. anyway? That being said, how great would it be if Edward Nigma and Jervis Tetch were BFFs on this show? Can we make that happen?

“Hold on. Somebody stuck a penny in here.”

Bullock and Gordon visit the coroner and discover the Copy Goat’s first victim has a penny sewn into the base of her scalp, a detail of the original Goat Killer’s modus operandi that was never made public. They head to a nursing home to chat with Bullock’s old partner Dix (having barely survived their run-in with the original Goat) to ask him how the copycat could possibly know about the pennies. Dix is convinced that the Goat was never one man, but a group of people posing as the Goat to kill Gotham’s rich and elite first born. Bullock dismisses the idea, believing that a conspiracy is just too complicated. The truth is never that complicated. Dix asks Gordon to look out for Bullock because he has a tendency to run head first into danger to be the white knight hero. Gordon laughs this revelation away (“You’re talking about Bullock? Harvey Bullock?”), but second guesses himself when he sees Bullock checking in with the home’s manager and realizes that Bullock has been paying for Dix’s stay. Maybe the truth about Bullock is a little more complicated after all.

Bruce is watching news coverage of the Copy Goat Killer on television while putting together a wall of newspaper clippings and photos that piece together “how Gotham works” in an attempt to understand it all. You know, normal arts and crafts time for a twelve year old. Alfred is concerned that Bruce fits the Goat’s M.O. as the first born of a wealthy, powerful family. He suggests that they leave Gotham until the Goat is found and put away. Just to be on the safe side. Bruce refuses, opting to work on his conspiracy wall instead (which Alfred doesn’t say a word about, by the way). That night, Bruce is asleep on the couch because apparently there are no other rooms anywhere in Wayne Manor, let alone beds. Selina Kyle sneaks inside through a window, checks out Bruce’s sweet conspiracy wall, steals a fancy box, watches Bruce sleep while perched on an ottoman, and the jets out of there the way she came. Weird scene. No idea what it has to do with anything, but I kind of love these random Selina sightings every week for the pure absurdity of their existence.

The Penguin visits his mother who hasn’t seen him in weeks, believing the only explanation to be that he’d fallen into the arms of a “hussy” who told him to stop talking to his mother. He quickly convinces her otherwise, telling her that he’s just been working because one day he’s “going to be somebody in this town”. Then he takes a bath and tells his mother all about his new best friend the trustworthy policeman, all while she slowly and intimately washes him with a sponge. This is an actual thing that happens. And it got real weird. Penguin seems to think that Gordon is going to somehow help him rise to power in Gotham. His mother backs away in horror. We have no idea why.

“Mother, please stop looking at me like that. It makes me uncomfortable. Now let’s go take a bath.”

As the Copy Goat takes another victim, Bullock and Gordon track him down to the same abandoned theater that Bullock faced off against the original Goat Killer. While Gordon finds the new victim still alive, Bullock fights with and arrests the Copy Goat, a man named Raymond Earl. Once in custody, Bullock notices that Earl has the same fist-clenching tick that Mr. Hastings had. After a bit of research, Bullock realizes that Earl and Milky both had Mr. Hastings’ therapist in the past. He confronts her and discovers that she is a hypnotherapist who has been using her patients as “the Goat” to kill the rich and powerful. She thinks of it as her therapy for Gotham. She sics Mr. Hastings on Bullock, before making a slow, confident getaway. But she underestimates Bullock’s luck against a 60 year old man, and he shoots her in the leg. The Goat’s rein of terror has finally ended.

With that taken care of, Gordon goes home to find that he is being arrested by Montoya and Allen for the murder of the Oswald Cobblepot. He’s taken to the station but before Gordon can explain that he didn’t really kill the Penguin, Montoya and Allen arrest Bullock as an accomplice in the murder based on their witness’ testimony. Just as Captain Essen gets involved in the situation, the doors to the GCPD open and the Penguin waddles inside alive and well and decidedly not murdered. Instead of celebrating, however, Bullock shouts “you son of a bitch!”, rushes toward Gordon and… we’ll have to wait until next week to find out!

“Why can’t I always be written this well?”

So, this is hands down the best episode of Gotham so far (by a MILE). The mystery of “the Goat” was pretty compelling and I loved the revelation that therapist wasn’t only behind the whole thing, but was also treating it as therapy for the city itself. Great stuff. Plus, we got a lot of much needed Harvey Bullock character development. I’ve really disliked their take on the character up until now, so I’m glad to finally see some chinks in Bullock’s “dirty cop” persona. Ben Edlund knocked his first script for Gotham out of the park. Even the weirder moments like Selina going all Twilight on Bruce, or Mama Penguin bathtime fun were weird in an incredibly engaging and entertaining way that comes from a guy who knows exactly what this show is. I think Edlund has a better handle on the show’s tone than any of the other writers (including the showrunner) and I can’t wait to see what he’ll do in his next episode.

1) How is Gordon’s relationship with Bullock going to change now that the Penguin is out of the bag?

2) Will Renee Montoya and Crispus Allen finally start trusting him now that he’s not a dirty murderer?

3) Will Selina and Bruce ever meet when one of them isn’t asleep?