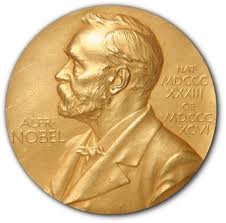 ‘Tis the season to be jolly.

This year’s recipient of the Nobel Prize in Literature has been announced.

Here are fifteen interesting things about the prize. I bet you didn’t know some of them.

1) The Nobel Prize in Literature is one of five prizes established by Swedish philanthropist and millionaire Alfred Nobel (1833–1896). Nobel made his fortune from inventing dynamite.

2) The money left behind by Nobel for the prizes is managed by the Nobel Foundation, founded in 1900.

4) After the Swedish Academy has reached a decision, the files of the proceedings are classified for 50 years.

5) On several occasions, Swedish tabloid journalist Gert Fylking has crashed the Swedish Academy’s press conference. After the announcement of the winner, Fylking immediately cries out, “At last!”, poking fun at prize recipients’ obscurity.

6) Apart from the honor of being a Nobel Prize laureate, the winner of the Nobel Prize in Literature receives a gold medal, a diploma, and a sum of 8 million Swedish kronor, approximately 1 million US dollars.

7) Thirteen women have received the Nobel Prize in Literature. The first woman to receive the prize is Swedish author Selma Lagerlöf, in 1909. The latest is Canadian author Alice Munro, in 2013.

8) The average age of a recipient of the Nobel Prize in Literature is 64.3 years.

11) France is the country with the most authors to receive the Nobel Prize in Literature with 14, followed by the United States and Great Britain with 11 authors each, and Germany with 8 authors.

13) Erik Axel Karlfeldt is the only author to have received the prize posthumously. In 1974, the Nobel Foundation’s statutes were changed to require the recipient to be alive on the day of the announcement.

14) Boris Pasternak and Jean-Paul Sartre are the only authors who have declined to receive the Nobel Prize in Literature. Pasternak after pressure from the authorities in his home country, the Soviet Union. Sartre because he never accepted any kind of official award or honor.

15) Elfriede Jelinek accepted the prize in 2004, but declined to appear at the Nobel Prize Ceremony because she suffers from agoraphobia and social phobia. Instead she sent a video message.