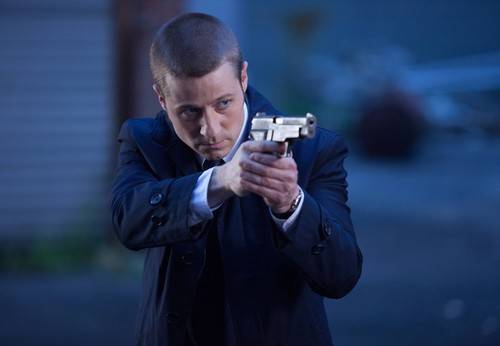 FOX’s Gotham debuted on September 25, billed as a show about Gotham City before Batman. Nobody was sure whether to expect a TV version of the much beloved Gotham Central comic, or Extra-Broody Smallville.

After three episodes, we’re still not sure.

Jim Gordon (Ben McKenzie) draws down on a bad guy, or possibly his own partner

The Story So Far: In episode one, twelve-year-old Bruce Wayne (David Mazouz) watches helplessly as his parents are murdered. New-detective-in-town Jim Gordon (Ben McKenzie) promises to catch the killer. First, though, Gordon has to contend with his own partner, Harvey Bullock (Donal Logue). In the tradition of cop dramas, they are very different. Bullock likes to crack wise and beat up suspects. Gordon likes to deliver earnest speeches and grimace disapprovingly while Bullock beats up suspects

While chasing down the chief suspect in the Wayne murders, Bullock conveniently kills him, and Gordon senses a frame job. He quickly learns a lesson about the cozy relationship between Gotham’s crime families and the police department. Pretending to take orders from the Falcone crime family, Gordon commits the least convincing fake-murder ever, by shoving Oswald “Totally Not the Penguin” Cobblepot off a pier and ordering him to leave town.

Meanwhile, Detective Renee Montoya from Major Crimes seems to know a lot about Gordon’s fiancee. I wonder if that is significant?

Episode Two focuses on a gang of creepy bad guys kidnapping children for unspecified reasons. This is mostly an excuse for Camren Bicondova to steal scenes as Selina “Cat” Kyle, a winning thirteen-year-old who will not hesitate to scratch the eyes out of someone who threatens her.

Back at Wayne Manor, her obvious soulmate Bruce is burning himself with a candle to find out if he can still feel. Gordon stops by long enough to suggest therapy, which Alfred (Sean Pertwee) testily explains is not a thing that Waynes do. Developments continue in the Gotham crime family wars, and Cobblepot (Robin Lord Taylor, gunning a little too hard for the early lead in the Everybody’s Favorite Psychopath race) pulls himself out of the water and prepares for his grand return, stabbing basically everybody he meets on his trip.

At episode’s end, Gordon get a call from Selina Kyle at the precinct. She wants to make a deal: If he’ll keep her out of juvie, she’ll tell him who killed the Waynes.

This brings us to Episode Three, which I will address through a series of questions.

Who’s the Villain of the Week?: We’re introduced to a Madoff-type financier who stole pensions from bus drivers and old ladies. (We know because he brags about it). Just when we’re lulled him into a false sense of ‘ripped from the not-very-recent headlines’ predictability, our Fat Cat gets attacked by the real villain: a street vendor wearing a pig mask, who ties him to a weather balloon and sends him floating off into the sky.

It’s a credit to Gotham‘s design and art department that this conceit works at all. The first use of the balloon image, floating away while a man hangs from one leg, is blissfully weird, more Burton than Nolan. It brings home how well the visual style of the show has been established. This Gotham feels both lived-in and surreal.

Unfortunately, what follows is a conventional procedural plot, and it can’t sustain that early level of strangeness. The investigation does yield a nicely executed montage of Bullock getting information by kissing streetwalkers and beating up pimps, while Gordon looks on in various degrees of bemusement. Get these two away from the deadening dialogue, and they might have some chemistry.

As for the actual mystery, if you figure out whodunnit, it’s not from the storytelling but because you recognize Dan Bakkedahl from when he was on The Daily Show and know he is too (relatively) famous not to be the culprit. I cannot confirm or deny that this storyline ends with Gordon riding a weather balloon that Bullock has to shoot in order to save both him and Balloonman. But how did you think this was going to go?

So Who Steals the Show? Selina Kyle, in what looks like it’s going to be a pattern. I’m not exactly unbiased — Catwoman was my first favorite DC Comics character, thanks to Ed Brubaker and Darwyn Cooke’s solo series. But this teenage reinvention of Selina is something special. Of course, Selina doesn’t reveal the real killer this early in the season, but she does trick Gordon into jumping down a sewer in his much-too-nice suit, while she smoothly picks her way out of handcuffs. He may think he’s seen the last of her, but we know better.

Speaking of awesome women from the DC Universe, what is Renee Montoya up to? Making out with Jim Gordon’s fiancee…..!

OK, not exactly making out, but there’s a definite (if artfully shadowed) kiss. It is unambiguous that Renee (Victoria Cartagena) and Barbara Kean (Erin Richards) used to be a couple. They used to live together in the apartment with clocktower-style windows that that Barbara now shares with Jim. Renee still has a key.

But I don’t want to get too caught up in romantic intrigue, when Renee and her partner Crispus Allen seem to be the only people in Gotham doing decent policework. Unfortunately, they are investigating Gordon’s supposed murder of Cobblepot, which did not actually happen. This will soon be clear to everyone because . . .

Is there a surprise twist at the ending?

Yes! Gordon is absolutely gobsmacked that Cobblepot is back in Gotham when he’s been told to leave town.

Also, no! Because throughout this episode we’ve been following Cobblepot’s return to Gotham. There should be nothing remotely surprising about this ending.

But you’re still watching next week?

Of course. All the bad guys were mumbling something about “Arkham,” and I have to see what that’s about. And whether Jim knows about Barbara and Renee. And what Selina’s going to wear.