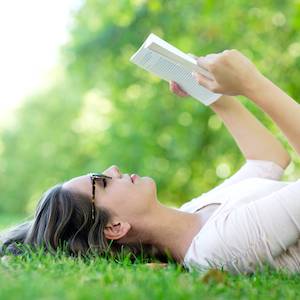 Books take you places. It’s a fact. In these sweltering days of summer, I find myself longing to make the journey to colder climates. I’m stuck in Houston, though, so I’ve got to make the best of a bad situation.  As I make my daily commute, windows down because the AC doesn’t work, I’m going to be blasting these wintry titles.  Hearing about the snow and cold is bound to make the heat more bearable.

Take a look (and listen) at three audiobooks that promise to help you beat the summer heat: This book never caught my attention until I started seeing previews for the film this time last year. I still haven’t seen the movie, and it may be quite a while before I do. After my first listen of Oliver Wyman’s narration, particularly a long passage describing the winter landscape in Helprin’s Edwardian New York City, I can’t begin to imagine that the movie does it justice. It’s simply breathtaking.  It’s a long listen (27+ hours), and I’m not at the end yet. I’ll tell you, though, that I felt the need to bundle up after listening to the tale of Peter Lake’s near capture and the beautiful white horse that becomes his protector. There’s an element of magic to the story, of fantasy, and it all begins on a winter’s night. The Snow Child is an absolutely stunning novel that finds its beginning in a Russian fairy tale. There is an abundance of beauty and wonder associated with the story. There is also a fair amount of sadness that comes along with the hardships faced by Jack and Mabel in their new home on the Alaskan frontier.  The sadness is always outweighed by hope, however. That is what made it one of my favorite reads from 2012. Well, that and an early scene when Jack and Mabel spend an evening building a snow child and reconnecting with each other. It’s such a beautifully executed scene. I always feel the need to curl up next to a fire when I re-read (or listen) to it. This is a different animal.  Sure, there’s some magic – or something? – involved. There’s lots of ice. Lots and lots of ice. And Little Debbie cakes. Pym is funny, and funny in that way that makes you think about the world and how it works without you actually knowing that you’re thinking. Mat Johnson slides his social commentary in the moments between jokes or moments that are so ridiculous that you have to stop, process, then laugh.  After reading this book, I had to wear a sweater to bed because I couldn’t quite get warm. I now also have an aversion to Little Debbie cakes. I’m sure that it will be short-lived.