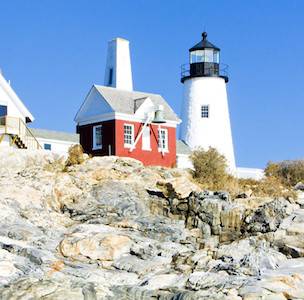 When I moved to Maine over a decade ago, I knew to expect rocky coasts, lighthouses, and acres of wilderness dotted with mountains and lakes. But I was clueless about Maine’s literary history and its vibrant contemporary community of writers, readers, librarians, and booksellers. Here’s just a taste of what awaits the literary pilgrim in Maine:

Nestled on the banks of the Penobscot River, Bangor is home to bestselling writer Stephen King, whose Victorian mansion, a mecca for fans, is on a street full of gracious homes once owned by nineteenth-century timber barons. The house is surrounded by a 270-foot-long wrought-iron fence embellished with bats on the gateposts and a spider web motif.

Bangor, fictionalized as “Derry”, is featured in several of King’s works, most recently 11/22/63. You can walk from the King house over to the Thomas Hill Standpipe, the inspiration for the haunted standpipe in It. Or you can drive a mile to see the statue of Paul Bunyan which came terrifyingly alive in the novel.

And if you’re in Bangor, check out the Bangor Public Library, which was a hiding spot for It‘s terrifying clown. The King family has been very supportive of the library over the years, and most recently donated $3 million to help pay for the repair of the library’s 100-year-old oxidized copper dome. If you visit, be sure to say hello to librarian Sarah Whitten, who was recognized by the Romance Writers of America as the 2013 Librarian of the Year.

Following the Penobscot River south to Penobscot Bay, the tiny town of Belfast is an unexpected mecca for book buyers. This 6,000 person town is home to several independent bookstores, including Old Professor’s Bookshop, Bella Books, Left Bank Books, and Nautical Scribe Books. Visit in late July for the annual Belfast Bound Book Festival where, in addition to 25,000 books for sale and an assortment of readings, workshops and other events, you might be surprised by Random Acts of Reading in which volunteers read passages aloud to unsuspecting passersby.

About half an hour south of Belfast is Camden, one of Maine’s best loved sailing ports. The Camden Public Library has a children’s garden lined by a winding bench whose granite supports are cut in the shape of books by Maine authors and illustrators.

Drive, or do the two hour hike to the summit of Mount Battie, where you can take in the same panoramic view of shimmering lakes, wooded hillsides, Camden Harbor and Penobscot Bay, that inspired local poet (and first woman to win the Pulitzer Prize for poetry) Edna St. Vincent Millay to write “Renascence” (1917), the poem that got her a scholarship to Vassar when she read it aloud to a well-heeled audience at the (still operating) Whitehall Inn.

The world stands out on either side

No wider than the heart is wide;

Above the world is stretched the sky,—

No higher than the soul is high.

The heart can push the sea and land

Farther away on either hand;

The soul can split the sky in two,

And let the face of God shine through.

But East and West will pinch the heart

That can not keep them pushed apart;

And he whose soul is flat—the sky

Will cave in on him by and by.

Cross the Penobscot Bay to idyllic, sleepy Brooksville for the inspiration behind Robert McCloskey’s beloved children’s books, One Morning in Maine and Blueberries for Sal.

Blue Hill Mountain is no longer covered in blueberries, but you can still hear the kuplink, kuplank, kuplunk of blueberries in a pail if you visit a local barren. Half an hour southeast is Brooklin, the setting for Charlotte’s Web.

Head back up north on the Blue Hill peninsula to reach Blue Hill, which still hosts the summer fair made famous by the novel. Who can forget the old sheep’s attempt to entice his rat friend to the fair:

“In the hard-packed dirt of the midway, after the glaring lights are out and the people have gone home to bed, you will find a veritable treasure of popcorn fragments, frozen custard dribblings, candied apples abandoned by tired children, sugar fluff crystals, salted almonds, popsicles,partially gnawed ice cream cones,and the wooden sticks of lollypops. Everywhere is loot for a rat–in tents, in booths, in hay lofts–why, a fair has enough disgusting leftover food to satisfy a whole army of rats.”

“Is this true?” he asked. “Is this appetizing yarn of yours true? I like high living, and what you say tempts me.”

If you can’t actually get to Maine, you can check out some of the writers who have used Maine as an inspiration for their books. Recent reads include Bangor native Christina Baker Kline’s NYT Bestselling Orphan Train and The From-Aways, CJ Hauser’s debut, both set in mid-coast Maine. Becca Fitzpatrick’s YA paranormal Hush, Hush series takes place on the southernmost coast. Downeast, probably somewhere around Machias, is the setting for Kristan Higgins’ romances Somebody to Love and Catch of the Day (the latter has a lobsterman hero) and the werewolves in Mainer Jan de Lima’s Celtic Moon, the first book in her urban fantasy series, reside somewhere near Mt. Katahdin. Last, but not least, Paul Doiron’s Mike Bowditch mystery/thriller series features a Maine game warden whose work takes him all over the state.

This barely scratches the surface of Maine’s literary connections. There’s the Wadsworth-Longfellow House in Portland, where the author of “Paul Revere’s Ride” was born and raised, Moosehead Lake, the subject of Henry David Thoreau’s “The Maine Woods” (try following his trip on the Thoreau-Wabanaki Trail) and the Harriet Beecher Stowe House in Brunswick where parts of Uncle Tom’s Cabin were written. Check out the Literary Map of Maine for more.