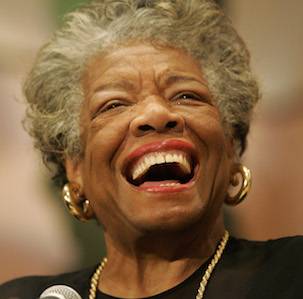 The first time I read “Still I Rise,” I think I was in third grade.

I understood the words, but I don’t think I had much of an understanding of the text beyond “this is a person who keeps rising!”

Then, at a summer program during middle school, I had to memorize it for a class. This was the same class in which we read (non-controversial) excerpts from I Know Why the Caged Bird Sings and other memoirs of minorities growing up urban in a previous era. This was a time in which I was coming into my own as an artist and a reader, a theater and choir geek, and a nerdy girl. This was the time in which I was being made fun of for my weight because other kids didn’t like that I was quiet and smart, a teacher’s pet.

I needed to Rise.

So I memorized a poem. I said those words over and over again. I consumed them; I became them.

I learned more about Maya Angelou the woman. How she was about the same age as my grandmother, grew up in the south, and lived all over. I read the rest of I Know Why the Caged Bird Sings, and learned how to make it through true hardship (and that my life was nowhere near as bad as it could be). I discovered that it was okay to like doing everything, just like I did. I learned “Phenomenal Woman” and swayed my hips to my heart’s content.  I mimicked her speech and elocution to the point people asked me where I was from. I watched Down in the Delta and followed her appearances on television.  I cheered her on as she received medals from presidents. My obsession died down as I got older, but my admiration and observation of her public life never did.

And if you follow #MayaTaughtMe on Twitter, or check what’s trending on any of the other social media, you can see just what kind of an impact she made–her words, her story, her life–on not only black women, but people of the world. Some of her most impactful sayings are repeated and highlighted in beautiful images and plain text.  Small things her words guided us to understand about ourselves and each other are shared in the simplest of ways.

“While one may encounter many defeats, one must not be defeated.”

Instead, just read the wonderful things people have to say about her all over the place.

So, rest in peace, Dr. Angelou. May your words continue to carry us through our rough days and pass down through countless generations of citizens of this world.