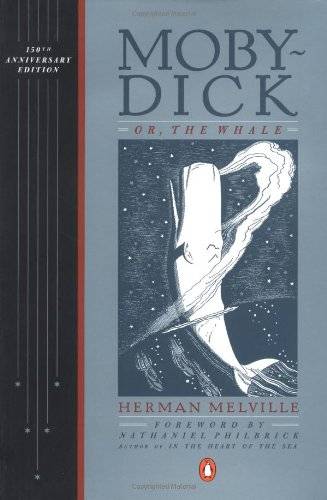 I first read Moby-Dick about ten years ago to show myself I still had the attention span to read things besides comics and erotica. The details that have stuck with me for a decade are the same things that many of we book nerds could recite by heart: Captain Ahab goes on a maniacal hunt for the great white whale, and P.S. onanistic whaling stuff. In other words, I loved it.

But during my latest re-read of Moby-Dick this winter, I was on the lookout for awesome moments that we don’t always think of when we think about Melville’s epic whaling novel. Sure, Ahab is a monomaniac and whale skulls are really huge. But what other juicy morsels are tucked into the pages of one of the world’s best-loved books? 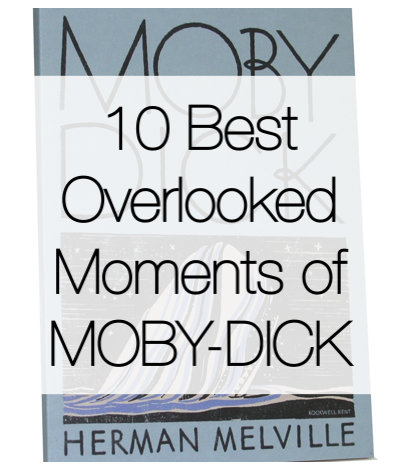 Here are my picks for the 10 best overlooked moments in Moby-Dick. What are yours?

Is there anything more heartwarming than Ishmael and Qeequeg’s bromance? As the pair waits around in Nantucket to board the Pequod, they share a bed at the crowded Spouter-Inn. See how sweet they are? “Upon waking next morning about daylight, I found Queequeg’s arm thrown over me in the most loving and affectionate manner. You had almost thought I had been his wife.” Ishmael tries to wriggle out of bed, but Queequeg’s arm stays wrapped tightly around him. (Chapter 4)

Melville gives a shout-out to Narwhals.

Not just kids and hipsters like Narwhals. Melville gives them a full two pages in his comprehensive Whale Classification System. He describes them as adorable, picturesque, leopard-like creatures; milk-white and dotted with black spots. “He is certainly a curious example of the Unicornism to be found in almost every kingdom of animated nature.” After wondering about the purpose of their horns, Melville decides they’d be great for helping Narwhals turn pamphlet pages. (Chapter 32)

After filling a pewter chalice with booze “hot as Satan’s hoof,” Ahab orders his harpooneers Queequeg, Tashtego, and Dagoo to detach the barbs of their harpoons and hold them upside down so the sockets can be filled with more “fiery waters.” The three men raise their harpoon goblets and drink as Ahab chants, “Death to Moby-Dick! God hunt us all, if we do not hunt Moby-Dick to his death!” That’s one hardcore drinking game, and I think I’ll be skipping it at my next party. (Chapter 36)

Exposing hidden environmental costs of the whaling industry, Ishmael points out the many human casualties at sea that go unreported every year. In a prophetic speech that would make modern-day conservationists proud, he cautions: “For God’s sake, be economical with your lamps and candles! not a gallon you burn, but at least one drop of man’s blood was spilled for it.” Preach, Ishmael. (Chapter 45)

Even whale ships have etiquette rules.

And you thought a “Gam” was a shapely leg. In one of my very favorite chapters of Moby-Dick, Ishmael explains the importance of being neighborly to other whale vessels and describes a complicated social ritual called The Gam. “What does a whaler do when she meets another whaler in any sort of decent weather? She has a ‘Gam,’ a thing so utterly unknown to all other ships that they never heard of the name even.” For the lowdown on how to greet other whale vessels at sea, just take a peek at Chapter 53. It involves swapping whaling gossip and old newspapers. (Chapter 53)

After choking on the 90-year-old cook’s overdone whale steaks, Stubb shares his own recipe: “Hold the steak in one hand, and show a live coal to it with the other; that done, dish it; d’ye hear? And now to-morrow, cook, when we are cutting in the fish, be sure you stand by to get the tips of his fins; have them put in pickle. As for the ends of the flukes, have them soused, cook. There, now ye may go.” In the next chapter we learn about more whale delicacies like tongue, barbecued porpoise, whale balls, strips of blubber, and brains. Yum! (Chapters 64 and 65)

Each whale ship has its own special signal like a bat signal.

As the Pequod encounters the Jeroboam on a dark and stormy night, Ishmael lets us in on a bit of badass whale ship trivia: “Like the vessels of military marines, the ships of the American Whale Fleet have each a private signal; all which signals being collected in a book with the names of the respective vessels attached, every captain is provided with it. Thereby, the whale commanders are enabled to recognise each other upon the ocean, even at considerable distances, and with no small facility.” Nah nah nah nah nah nah nah nah Bat-mannnnnn! (Chapter 71)

Everything you ever wanted to know about whale sex.

Ever wondered about the mating rituals of whales? Ishmael’s got you covered: whale baby daddies travel in schools with their harems of concubines, and if any young guys try to cut in on the action, they fence it out with their long jaws. Whale children are left to be raised by their mothers, “for like certain other omnivorous roving lovers that might be named, my Lord Whale has no taste for the nursery […] he leaves his anonymous babies all over the world.” In a beautiful earlier chapter, Ishmael describes a tender scene with a herd of whale mothers nursing their young “suspended in those watery vaults.” (Chapters 87 and 88)

In the late chapters of Moby-Dick we meet the blacksmith Perth, a poor sonofabitch who joins the broken-hearted at sea after losing his home and family. Aboard the Pequod, Ahab commissions Perth to make him a harpoon with barbs tempered in human blood. “No, no — no water for that; I want it of the true death-temper […] Ego non baptizo te in nomine patris, sed in nomine diaboli!” A few chapters later, the harpoon spontaneously bursts into FLAMES!!!! Baptized in the name of the devil, indeed. (Chapters 113 and 119)

SPOILER ALERT: Everyone dies at the end except Ishmael, including Captain Ahab and Moby-Dick. As Ishmael floats on a piece of wood waiting to be rescued by the Rachel, he watches the Pequod’s remains sink: “Then all collapsed, and the great shroud of the sea rolled on as it rolled five thousand years ago.” Goosebumps. (Chapter 135)