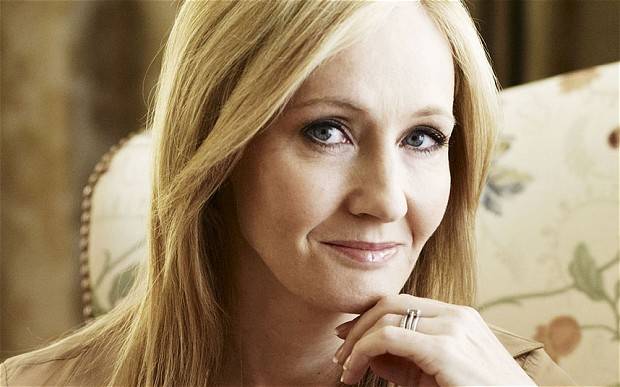 Here’s the thing about writing a response piece. You don’t want the opinion your response is directed toward to be completely idiotic and insane. Just like you don’t want to have a debate with an opponent whose platform is completely idiotic and insane. You want to be able to have respect for what you’re going up against. Then you feel like, if they’re not a class act, at least a person with a respectable degree of class. For me, a debate is always preferable to a fight. I like discussions and roundtables. I’m not really one for smackdowns.

So I’m trying to find something to respect (or at least understand) about Lynn Shepherd’s recent piece for Huffington Post UK entitled “If JK Rowling Cares About Writing, She Should Stop Doing It.” I’ll briefly sum up Shepherd’s POV and then I’ll do my damnedest to respond with as much respect as I can possibly muster. This might end up with me crying blood. Whatever, I like you guys, I’ll do it for you.

So, basically Shepherd’s argument was that it was bad enough that all these adults were reading Harry Potter (“because there are so many other books out there that are surely more stimulating for grown-up minds” she argues, after sentences earlier admitting she has never “read a word” of Rowling’s) but that enough was enough with Rowling’s follow-up effort to the Potter series. Her first published mystery The Casual Vacancy, “sucked the oxygen from the entire publishing and reading atmosphere.” Shepherd goes on to claim that “that that sort of monopoly can make it next to impossible for anything else to survive, let alone thrive,” and then she asks “…what can an ordinary author do, up against such a Golgomath?” She goes on to discuss the similar effect of Rowling’s second mystery The Cuckoo’s Calling (originally published under a pseudonym). Then she concludes with a request for J.K.: “By all means keep writing for kids, or for your personal pleasure – I would never deny anyone that – but when it comes to the adult market you’ve had your turn. Enjoy your vast fortune and the good you’re doing with it, luxuriate in the love of your legions of fans, and good luck to you on both counts. But it’s time to give other writers, and other writing, room to breathe.”

I was going to respond to this respectfully, wasn’t I? I’m still going to try to do that.

Ms. Shepherd, I find it strange that you feel so comfortable passing several hundred words of judgement upon a writer whose work you’ve literally never read a word of.

I also find it strange that you think big blockbuster books “suck up all the oxygen” in the publishing industry, making it impossible for any other books to “survive let alone thrive.” I feel like I need to explain to you how business, and supply and demand, and well, money in general, work. When a book does incredibly well, a lot of that money goes to the publishers, and when a publishing house has money, it can do all sorts of things, namely BUY OTHER BOOKS.  The advances all those lesser-known (or completely unknown authors) receive for their book deals? Those advances are made out of money, and that money came from somewhere, and that somewhere was the sale of other books. J.K. Rowling has sold a bajillion books, and those bajillion books made so many other writers’ dreams possible. She’s not the Terrible and Fearsome Oxygen-Sucker-Upper of publishing. She and John Grisham and Veronica Roth and John Green and E.L. James are THE LUNGS of this industry.

Finally, I find it strange that you assume that once an author has become famous/successful enough, they should retire like a sixteen year old Olympic gymnast. The great thing about getting to be an author is YOU CAN DO IT UNTIL YOU’RE DEAD. J.K. Rowling can publish as many books as she wants to, she can make as much money off those books as she pleases, and she can do all this with a clear conscience because she’s not breaking any kind of moral code. She’s not taking anyone’s place. That’s not a thing. She created her own career just like you are creating yours. And that’s not to say that publishing is fair (or life, for that matter), it’s not to say that merit and hard work are always rewarded (because of course, they aren’t, see the thing about a dozen words back about life not being fair), but it is to say that her success doesn’t take away from your own. It doesn’t take away from anyone’s. On the contrary, she’s probably done more than most to make it possible for other writers to be compensated and recognized for their work. And if you can’t see that, I have to imagine it’s because you’re choosing not to look.

Does anyone think Shepherd had a point (or even like, a half of, or a quarter of a point?) Or a separate bone to pick with this Huffington Post piece (or with me, that’s fine, I’m used to it by now)? Let a girl know in the comments.