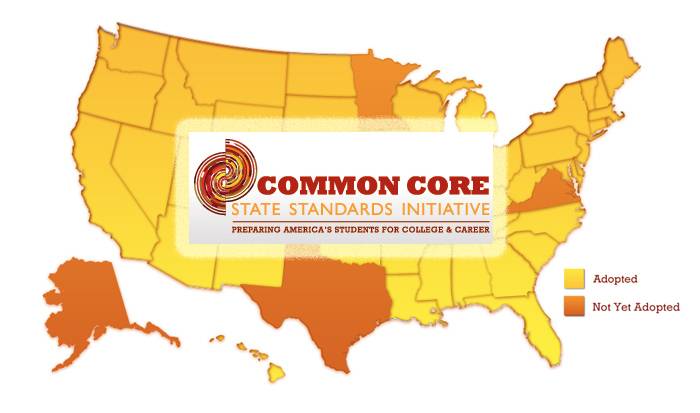 If you take a mirror into a dark room, close the door, whisper “Common Core” three times and spin in a circle, legend has it that a sinister creature, born from the minds of Bill Gates, President Obama, and the faceless bureaucracy of the American educational system shall appear to you. WARNING! This creature feeds on the souls of children… or something. Maybe it feeds on your soul, and then you go after the kids? I don’t really know. Frankly, keeping up with the latest tales about the Common Core education standards and what they’re sure to do to kids throughout the 45 states that have adopted them is exhausting.

As a high school English teacher, I sometimes feel as though I’m in the eye of a Common Core tornado. My immediate surroundings are calm, but there’s an eerie rumbling just out of sight, comprised of anger, misunderstanding, and a whole lot of uncertainty. So maybe we haven’t yet developed Common Core-centric urban legends, but it doesn’t feel like we’re too far off.

(This might be a good time to mention that I had nothing to do with Common Core’s creation, nor do I stand to benefit financially from it in any way. I bring this up only because I think it’s good practice when you’re told that someone has created a cure-all for the ills of our education system to ask questions about who stands to gain the most. Too often, the answer is testing companies and those who sell “educational resources” to school districts for huge sums of money. Public education is often a for-profit game, to be sure, it’s just that students and teachers aren’t always the ones who profit.)

Most of the chatter I’ve heard and conversations I’ve had about the Common Core revolve – big surprise – around reading. One of the most publicized facets (at least publicized among English teachers) of the new standards, which have only been formally adopted for math and language arts, K-12, is the move toward reading more nonfiction (or as the standards themselves put it: “Informational Texts”). This has led parents and educators alike to express concern over the (potentially diminishing) role of fiction in the classroom.

It would be easy to view the ten “Informational Text” standards (which I will hereafter call “non-fiction” standards because their way makes it sound like we’re making kids read air conditioner installation manuals) as a definite move away from fiction, poetry, and drama, as a re-shaping of the English classroom as we know it.

This is a valid concern. Hearing that schools are increasing the focus on non-fiction naturally raises the question, “What will it replace?” The logical answer, given that we’re talking about lit-heavy traditional English classrooms, is To Kill a Mockingbird, 1984, Hamlet, and a bunch of other stuff that you may remember from your time in school. For those of us who think of works like these as part of our foundational reading experiences, the thought that coming generations might miss out on them because of new standards is distressing.

Most of the hand-wringing, however, is (A) probably premature and (B) possibly altogether unfounded. Why? Because the Common Core includes ten standards – at every grade level, K-12 – focused on reading literature. Here’s an example from the third grade standards (“RL” stands for Reading: Literature):

“Recount stories, including fables, folktales, and myths from diverse cultures; determine the central message, lesson, or moral and explain how it is conveyed through key details in the text.”

It’s worth noting that this language is for teachers, not students, meaning that no third grader in the country should be asked to explain the central moral lesson of the Chinese fable they just read and how key details from the text conveyed that lesson. A good teacher (or school, or district) will break this down into simple steps, appropriate for its given audience. What you’re left with after that is an expectation that students can recognize meaning and (in some way; notice that there’s no prescription for how the teacher determines that the student has met the standard) explain why they see the story the way they do. It values narrative, diverse cultures, and a focus on the importance of the text itself. It also provides teachers with a nearly blank slate in terms of choosing (or allowing students to choose) what kids read.

If I was any good with those gif things I’d have one right here of Colonel Kurtz repeating, “The horror! The horror!”

As you can tell, there isn’t a great deal of difference between the skill for which the standard accounts in the case of either fiction or non-fiction. They aren’t always this similar, but when you read both sets of standards, it’s clear that Common Core is way more concerned with the skills it takes to be a capable reader and thinker than with micromanaging exactly what students read. This is as true of the elementary standards as it is of those for high schoolers. Aside from one standard asking teachers to incorporate some important historical documents – the Declaration of Independence and Lincoln’s second Inaugural Address, for example – in their students’ study of rhetoric and another including Shakespeare in the study of drama, Common Core leaves the subject of reading material (thankfully) in the hands of teachers. It also makes no prescriptions about the amount of time teachers must spend helping students master the skills in question.

So yes, the traditional English classroom will likely change a little. Instead of reading Adventures of Huckleberry Finn and focusing solely on its literary merit, teachers might also now include some of Frederick Douglass’ Narrative of the Life of a Slave or Martin Luther King, Jr.’s “Letter from a Birmingham Jail” as ways of addressing the issues of racial identity and the effects of prejudice on a person’s sense of self? But wouldn’t allowing fiction and non-fiction to work in tandem provide students with more access points to some of the big ideas we English teachers love to prattle on about? Isn’t that a good thing?

Common Core doesn’t eradicate or marginalize fiction, it only asks that teachers and students pay attention to texts of all kinds and develop the skills necessary for dealing thoughtfully with those texts. That’s not to say that every teacher, school, or district will implement the standards in a way that reflects that last statement. Teachers face pressure from a number of places to conform to methods of instruction that are not in students’ best interests, whether in the name of state or district policy, standardized test results (If you want a reason to be skeptical of these new standards, start with how states will use them as an excuse to further stress standardized exam performance as the end-all be-all of intelligence and scholastic performance.), and administrative interpretation of Common Core’s application in the classroom. This pressure often creates distorted, ineffective learning environments. But when that happens, the problem is unlikely to be the set of (relatively) clear expectations for students set forth by Common Core, easy to blame though they may be.

As a lover of literature, I want my students to appreciate great writers and the power of language and story. I want them to find beloved authors and seek out new favorites. I want them to find ways to love reading. Common Core isn’t going to get in the way of that, and I know that my fellow English teachers won’t either.