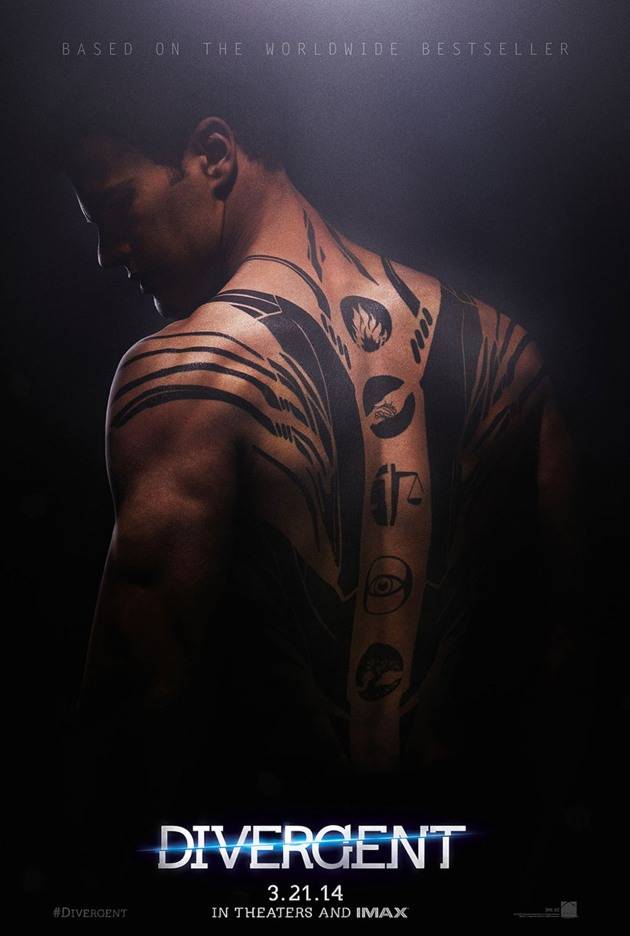 WHY CAN’T IT BE MARCH ALREADY!

I mean, I’m excited for Thanksgiving/Christmas/New Years/Chinese New Year/Valentine’s Day/et al. But I am REALLY excited for the Divergent movie that comes out March 21st. I’m not even the biggest fan of the books (for me the world-building skews silly and the action sequences all feel like young/hot and mean/old people running around injecting each other with evil serums). But I’m REALLY excited for the movie. Because the trailer is killer good fun times. Let’s run down!

:13- We start with a good hairstyle, which is ALWAYS a sign a movie will be good. Always. Shailene Woodley with a with a low twisty chignon donut bun thing for the win! I just trust a protagonist more when her hair is smash smash bang bang don’t stop chalangalangalang.

:25- They have put Kate Winslet in a matronly skirt suit and given her an old person haircut to try to convince me that she is the cruel and frumpy leader of a dystopian society and not Rose DeWitt-Bukater BUT I KNOW THE TRUTH, SHE’S JUST ROSE DEWITT BUKATER PRETENDING TO BE EVIL AND WITHOUT GOOD PERSONAL STYLE. But I saw the beaded dresses and fancy hats, in IMAX, no less, I know the truth.

:27- Everyone lines up for their Myers-Briggs Personality tests according to outfits. And that is all I have to say about that.

:30- Shailene smiles to herself in her Abnegation grey maternity wear as she sees the Dauntless in their slimming blacks jump off the train. How hard is it as a dystopian teenage girl to choose a faction when only ONE of the factions dresses cool?

:39- I might have been a little harsh on Rose Dewitt Dictator’s suit, that neckline is pretty sexy.

:53- The scene where Shailene almost drowns in a water tank in her mind because Myers-Briggs tests are SO MEAN IN THE FUTURE. Seriously, I know we all complain about how many questions are on the MB test and how we share the same personality type as Snape when we really wanted to be Hermione BUT BE GRATEFUL, THIS IS THE ALTERNATIVE.

1:05- The part where Shailene finds out she’s NOT like any other girl, because books about well-adjusted young women with close personal friendships and general respect for their peers do not sell as well as THE SPECIAL SNOWFLAKE WHO IS THE ONLY ONE SMART AND BRAVE AND UNCONVENTIONALLY PRETTY ENOUGH TO LEAD THE REVOLUTION, and they do not adapt for film as well either.

1:20- I get really excited when I see Shailene about to jump off a precipice to impress her cool, new Dauntless friends, but then she jumps into a net. That’s not dystopimpressive! Circus performers do that all the time! I feel like it’s much more Dauntless if you jump into an alligator/piranha/electric eel/great white shark tank but I didn’t write Divergent or adapt it for film, I’m just the girl over here with a really good idea for an evil sea animal tank.

1:24- How come we had to wait almost a minute an a half for the PLATONIC IDEAL OF A LOVE INTEREST. (Said like Stanley Kowalski in the rain)  THEO JAAAAAAAAMES!!!

1:25- Making up for lost time by seeing Theo James sexily do the following things: put together a gun really quickly, bossily order the new recruits around, teaching Shailene how to fight by putting his hands on her waist, throw daggers at Shailene and make her ear bleed, grab Shailene by the arm and saying both “I know what you are” and “It’s been a long time since I could trust anyone” AKA what every heterosexual teenage girl wants every handsome and overly serious heterosexual (or still deciding!) teenage boy to say to her EIGHTY MILLION TIMES A DAY.

1:55- I will never think of a joke or snark good enough to comment on this scene so I’m just going to describe it. Theo James takes off his shirt. His back is full of muscles and tattoos. The tattoos represent his secret fears and longings. “I don’t want to be just one thing,” he says. “I want to be brave and selfless and intelligent and honest and kind.” Shailene touches his naked back with her hand. He turns around. THERE THAT’S THE SCENE.

2:10- Guns, running, falling off things, hitting people in the face with elbows, more guns, I think I saw Theo James for one shot but he was wearing his shirt so it didn’t count.

2:16- That is a VERY cute turtleneck he’s got going on, though, I am going to buy my husband two now for Christmas and if he tells me that straight men can’t wear tight turtlenecks I will turn my marriage into a dystopian society and make my husband belong to a faction where he wears outfits I think are handsome and never cargo shorts again.

2:19- Aaaaand Shailene is making out with shirtless Theo James as the sun rises over a ruined Chicago skyline and onto all of his tattoos and I am seeing this film four times in theaters and more times at home.

What do you guys think of the trailer? Discuss and discuss some more!