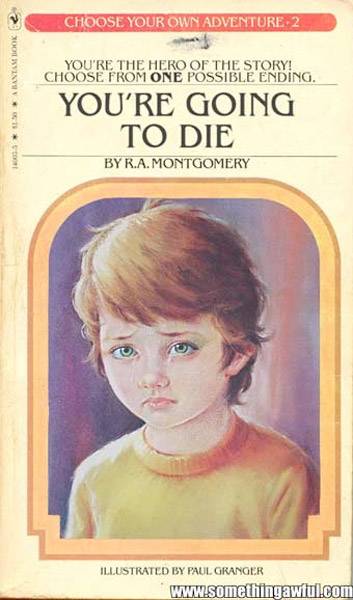 I don’t particularly like interactive pieces of fiction, where my involvement goes beyond 1) reading 2) comprehending what I’m reading. People take this fact about me, couple it with my dislike for book trailers and my very slow and grumpy adoption of eBooks and they assume I’m some sort of luddite.

I’m really not, though! For one thing, when it comes to interactive fiction, I have never ever liked it. I was a crank-ass child who would occasionally take home books from the library and be very displeased to discover I had checked out Choose Your Own Adventure books. I was always so mad. There wasn’t that much story, I couldn’t get into it for more than a page before I had to make an asinine decision (do I open a door or do I look out the window? Oh my god the adrenaline is surging!) and if I made the wrong decision, then the book ended prematurely and I had to backtrack. I enjoyed it like I enjoy balancing a checkbook.

So I’ve been very surprised recently to have discovered two instances of interactive fiction that I fell madly in love with. Not just surprised, mind you, but excited and hyper about it, because contrary to being a luddite, I actually go nuts over clever uses of technology.

This first piece is very recent and is basically a short story about a family in which the father, one day, goes down into the dirt-floor basement with a brand-new shovel and he begins to dig…and dig…and dig. And he won’t stop digging. The story goes on from there in a brilliant piece of creepy, riveting writing that I would have adored had I come across it in a book. It’s well-told and very, very sharp. I can’t convey that strongly enough.

The interactive element is oh-so-simple: the story comes at you in bursts. Maybe a paragraph, maybe just a sentence. A few words in that paragraph will be a bold link and you click that to get the next piece of the story to appear. Other interactive things happen later, but you have to go find them out for yourself.

It’s remarkable how much the simple act of having to click for another bit of story lends itself to the deeply tense and creepy as hell atmosphere of the story. It involves you in a way that not even turning a page can quite manage. It’s the same sense of creepiness as playing a scary video game, where you’re fully in control. You have to use the control to go into the creepy room. You’re involved. It heightens the tension.

It’s interactive, but very simply, and it’s a method of enhancing a terrific story that could stand fully on it own without the interactive element, and that’s excellent. Seriously, just stop reading me talking and go read the story. I cannot convey to you how excited and hyper it left me when I was done. I’d be willing to say this is one of my all-time favorite short stories ever.

Versu is an app I downloaded and played with on the iPad, expecting about ten minutes of interest out of what I assumed was going to be a Choose Your Own Adventure book…but it turned out not to be that at all.

They explain it brilliantly at the bottom of their web-site, but to loosely paraphrase, Versu offers you the opening premise of a story, a cast of charactes who join the story and depart. You are given, in the form of pages of text presented in a beautiful interface screen, something that comes very close to old text-based adventure games, which I’ve discussed in a previous article. The other people you are talking to have moods and reactions and different dialog paths and something like a reactive AI which means that your simple story (say you’re having tea and trying to be polite about it) builds itself fluidly based on what you do in any given moment. It isn’t presented to you as a series of choices and responses, like a chat-room window. Rather, you are given whole paragraphs and lines of dialog. You are literally building what looks and reads exactly like a book, but you’re doing it dialog by dialog, interaction by interaction.

When playing with it, I jokingly said that it was as close as I’d ever gotten to a Star Trek Holodeck…but if we’re being honest, I wasn’t particularly kidding. It has that feel.

There isn’t much content yet, but what is present is a lot of fun (what I’ve gotten to play with, anyhow). It’s a remarkable set of storytelling tools waiting for someone to use it to build a lengthy work with a tremendous amount of depth to the story. When that happens, it’ll go from tremendous fun to a tool for producing Serious Art, and that’ll be even more fun.

There’s lots of other interactive pieces of storytelling out there, and I’ll keep experimenting with them, grumbling, and wandering off solely because every now and then, I find gems like these two, and that makes it all worthwhile.