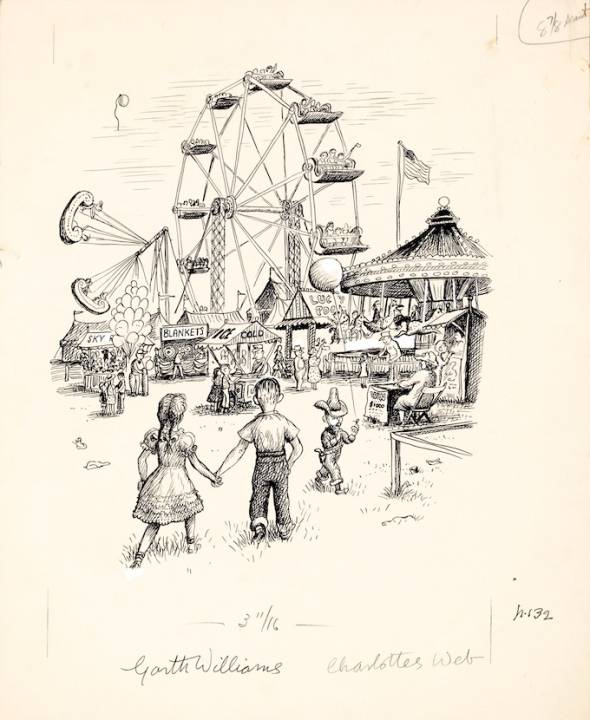 I want to go to the State Fair as it is depicted in Charlotte’s Web, a cornucopia and the culmination of summer. I wanted to throw a whole turkey leg over my shoulder while shouting, “Take me to the largest pumpkin my little 4-H-ers!” 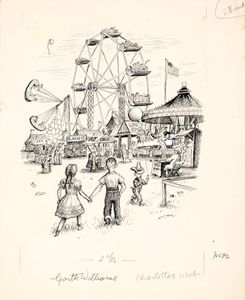 from the original illustrations of CHARLOTTE’S WEB

Instead the State Fair I was at in early September was the Maryland State Fair, and let me tell you sometimes reality falls far short of fiction — and hard. Maybe magical thinking runs in my family? Stories are told of my grandfather, then a kid and a fan of Sherlock Holmes, who was in London years ago and asked a cabbie to take him to 221B Baker Street, which until the 1930s was a purely fictional address. “But…” my grandfather said, “I read about it!”

Yes, there were sights and smells. But they were not glossed with E.B. White’s prose. There were sights of extravagant and deeply cleavaged plumber’s butt, misshapen baby chickens, a pig almost squashed to death her just-born piglets and had to be pushed away by a great force of farmers. “Pigs are stupid like that,” they told me.

In Charlotte’s Web there is no teenager vomiting Red Velvet funnel cake, nor are people cursing; the sun is just perfectly bright and not blazingly humid you might commit a crime bright. If Charlotte was there, I wouldn’t have been able to hear her for the blammo!-ing of the upsidedown deranged carney deathtrap rides.

Still, I had a good time. I sat rapt in front of a cow in labor, and inside that barn all the mothers knew how that cow felt and the empathy was palpable and crossed species lines, and yes, just like in Charlotte’s Web dust motes shimmered on their way down, before they settled on the hay.

Category ID: 477
Category ID: 867
Category ID: 468
What’s Up in YA? Newsletter
Sign up for What's Up In YA? to receive all things young adult literature.
Thank you for signing up! Keep an eye on your inbox.
By signing up you agree to our terms of use