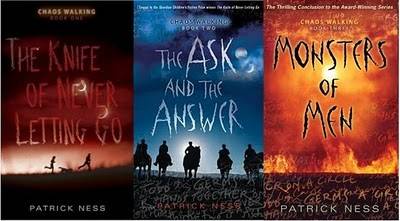 I just read Patrick Ness’ Chaos Walking trilogy this summer, and I have to admit I spent a lot of time imagining how it would be made into a movie. It seems to have many of the pieces you’d want form a new blockbuster YA dystopia series: huge scale, endearing love story, danger, a quest, and of course a very special orphan at the center of it.

And it looks like Hollywood agrees with me. Apparently, Charlie Kauffman is attached to adapt it (I know you are thinking “what the heck, Charlie Kauffman adapting YA dystopia?” but wait I’ll get to that) and it’s now up to director Robert Zemeckis (Forrest Gump, Castaway, Back to the Future, and a bunch of other stuff) to decide if he wants to take it on.

There’s one tough problem at the center, though. The thing that makes the trilogy intriguingly different is the very thing that would make it really hard to film: the Noise. Without getting spoilers all over you, here’s a brief description. Basically, the thoughts of all the men on this colonized planet are readable by everyone else. Some unknown alien disease/condition caused it when humans settled the planet. And the effects of “the Noise” are what sets the events of the first book in the series, The Knife of Never Letting Go, in motion.

As I was reading Chaos Walking, the problem of adapting the Noise into film kept creeping into my mind. You’d have to be really creative and subtle and smart and unafraid of hard movie-making problems to take it on. And that’s probably why somebody thought of Charlie Kauffman and why Charlie Kauffman agreed. Now, Kauffman has a habit of “playing” with source material, so I wouldn’t be surprised, if this project actually happens, that the movies we see vary wildly and widely from the books.

As a film franchise, Chaos Walking has a scale that previous fantasy/sci-fi young adult series don’t: it is a world-spanning, genocide-including story of loss, war, and colonization. In short, it’s not called Chaos Walking by accident.

Anyway, I find myself pretty excited about this prospect, but maybe it’s just because it has been on my mind recently. How about you other fans of the series?

Category ID: 470
Category ID: 480
Category ID: 468
What’s Up in YA? Newsletter
Sign up for What's Up In YA? to receive all things young adult literature.
Thank you for signing up! Keep an eye on your inbox.
By signing up you agree to our terms of use

Does this sound great or head-slappingly foolish? I think mostly the first, but acknowledge the very real possibility of the latter.