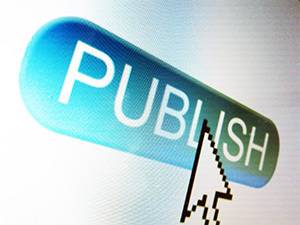 In a tent in Edinburgh’s Charlotte Square a gentleman is being flogged. His crime? He is a publisher. His assailants? All authors. Once they were inseparable. Now they are like a family slowly breaking down amidst catty asides, rolling-eyes, and the airing of past hurts. The blows are all verbal of course. But as they lay into him they taunt him not only for what he is, but for what he is not; he is not their saviour, Amazon. In the book world, this is the cruelest of all barbs.

On the face of it, it is a surprising exchange. The monopolistic Amazon is hailed as the authors’ champion, while publishers are narrow-minded, money-grabbing fiends who deserve everything that comes to them. The event, Being a Writer in the Digital Age at the Edinburgh International Book Festival, is descending into the publishing equivalent of a debate on who the most evil bad-ass between Voldemort and Sauron.

But maybe the authors have a point. The writers in question here are Catherine Czerkawska and Maggie Craig. Thanks to self-publishing through ebooks they have found new audiences and income. Before the Kindle however, they were at the mercy of publishing houses. Both are scathing about their experiences.

Czerkawska describes herself as a classic midlist author and recipient of many a “rave rejection” from publishers for work they described as “too accessible and not experimental enough”. They wanted “oven-ready” stories with no need of editing or investment.

Likewise, Craig said she was “in despair” before ebooks. Previously, her most successful book, Damn Rebel Bitches: The Women of the ’45, earned her only £5000. “In big publishers when a writer starts to make money they call a meeting and work out what went wrong,” she says.

Even the big publishing houses attempts to support self-publishing are met with derision and hostility. Author Solutions, an arm of Penguin Random House, is called “the worst vanity project in the world”. It apparently regularly fleeces writers too, according to Czerkawska.

Compared to the dank, claustrophobic atmosphere of working with major publishers, self-publishing through Amazon appears to be like taking a deep lungful of Alpine air.

“Amazon has given me a good income stream for the first time,” says Craig. “It has helped us finally earn the rewards for our hard work.”

So what say the penny-pinching publishers? The punching bag on stage is Mark Buckland, managing director of Cargo Publishing. Despite being a relatively new addition to the UK publishing scene (it was founded in 2009), it set up Scotland’s first ebook imprint, and works with over 250 authors including the likes of Will Self and Roddy Doyle.

Publishers, on the other hand, are guardians of quality and protectors of talent. “Publishers do it because they love literature, not to make money,” he says. “Otherwise they would just sell drugs and guns.”

He is bold enough to articulate the hard truth behind what it means to have gatekeepers: “Everyone having a voice is not necessarily a good thing”. There is an audible gasp in the crowd. The air chills. The authors smell blood.

“Deeply patronising,” says Craig. “Only in literature are people encouraged not to have a go,” says Czerkawska. “Who are you to say what is culture?” bays the crowd.

Of course, both sides have a point. Publishers are not immune to chasing fickle trends and flooding the market with mediocre replicants of last year’s hit. Amazon’s grip on both the ebook and physical markets is closer to a gangster’s stranglehold at times. But the glee with which the authors seem to not just abandon publishing houses but toss a match over their shoulders as they leave is surprising. I am not alone in feeling this.

As Buckland says towards the end of the bruising encounter, “I’ve had some bad sushi but I’m not calling for the Japanese trawler fleet to be torched.”

But for the authors, it is already burning.