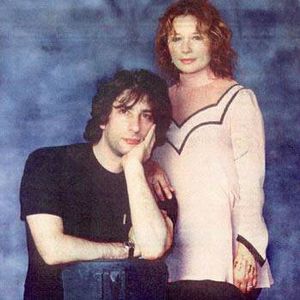 Last-name formality feels strange when referring to people I’ve loved for over half my life, as well as had the privilege of meeting, however briefly. First-name basis throughout.

Although I am a writer of book things, I must confess that I know far more about Neil Gaiman’s friendship with Tori Amos from the Tori side. When I was a teenager, she understood my plight, you know? She’d felt my pain and gotten through it. Despite my sometimes-disappointment in some of her output from the last decade, I remain a devoted fangirl.

Were I a betting woman, I’d be willing to wager that quite a few Neil Gaiman fans, obviously including myself (aged 14), first learned of his work via a Tori Amos song, interview, or album credit. (For me, it was the line from “Hotel” about the Velvets that got me to read Neverwhere.) And maybe some Tori fans came to love her music because of a character, acknowledgement, or other shout-out from Gaiman.

At any rate, particularly in the 90s, the two were frequently linked via their work.

It all began prior to the release of Amos’ first album, Little Earthquakes, which came in the US in 1992. The song “Tear in Your Hand” contains her first Neil reference. Her friend, Rantz, identified as the “Sandman comic supplier” in the Little Earthquakes liner notes, had turned her on to Sandman; she sings, “If you need me, me and Neil’ll be hanging out with the Dream King/ Neil says hi, by the way.” (When Neil wrote bits and bobs for Tori’s tour books, he often began them with “hi, by the way.”) A Little Earthquakes demo reached Neil at Comic-Con in San Diego, and he dug it.* Once he and Tori started corresponding, she swore they’d known each other in a past life, and so began their friendship.

If you need me, me and Neil’ll be hanging out with the Dream King/ Neil says hi, by the way – “Tear in Your Hand,” Little Earthquakes, 1992 (US). The “Dream King” is Dream from the Sandman comics.

Seems I keep getting this story twisted/ So where’s Neil when you need him? – “Space Dog,” Under the Pink, 1994.

And if there is a way to find you, I will find you/ But will you find me if Neil makes me a tree? – “Horses,” Boys for Pele, 1996. This line refers to a deal that Neil and Tori made: she lent him a house to write in; he transformed her into a copper beech tree in the novel he was working on, Stardust.

Got a sister named Desire [ . . . ] Teach me about them old worlds, big brother – “Sister Named Desire,” b-side, 1996. Delirium from Gaiman’s Sandman is loosely based on Amos, and Desire is another of the Endless. Though Delirium came before his friendship with Tori, Neil acknowledges that the two “steal shamelessly from each other.” The “big brother” she mentions is possibly Dream but may also be Neil himself since Tori has referred to him as her “spiritual brother.” (Song also appears on the musical tribute titled Where’s Neil When You Need Him?)

Where are the Velvets when you’re coming, coming down? – “Hotel,” From the Choirgirl Hotel, 1998. The Velvets are vampiric characters, guides of a sort, from Gaiman’s Neverwhere. This line is the reason I picked up that novel, my first Neil.

So we go from year to year with secrets we’ve been keeping – “Wednesday,” Scarlet’s Walk, 2002. The title and this line are likely references to Mr. Wednesday from American Gods.

Get me Neil on the line/ No, I can’t hold/ Have him read “Snow Glass Apples,” where nothing is what it seems – “Carbon,” Scarlet’s Walk, 2002. “Snow Glass Apples” is a short story that appears in Neil’s Smoke and Mirrors. It is a retelling of the Snow White fairy tale.

Neil is thrilled, he can claim he’s mammalian/ But the bad news, he said, girl, you’re a dandelion/ Dandelion, hey, I need to think about that/ Yeah, I thought about that and I said What the hell?/ He said, Nope, you are earth bound/ Blow them seeds away/ Maybe one will make a sound – “Not Dying Today,” Abnormally Attracted to Sin, 2009. Seems to be a reference to what Cory Doctorow discusses here and here. At least, I couldn’t find another source for it. In that context, I’ve always considered it a comment on her prolific output in the last decade, in the span of which she’s released several albums in a row with 20+ tracks: “blow[ing] them seeds away,” trying to create a hit.

For Tori’s covers album Strange Little Girls, released in 2001, Neil wrote a series of character descriptions—later to appear in Fragile Things—for each of the women she portrayed on the album of songs originally written and performed by men.

Almost all of Tori’s liner notes contain brief thank-yous or hellos or little references to Neil’s works. Around album-release time, her fans get notoriously crazy-bananas, and Neil has always been incredibly gracious in fielding questions on his website about whether he’s heard the new material, and what he thought, and when will it come out, and what color shoes was she wearing last time you saw her? Crazy. Bananas.

Delirium, as mentioned above, transformed after Neil and Tori became friends to loosely resemble her. This resemblance is most striking in The Sandman: Brief Lives, and some lyrics from “Tear in Your Hand” also appear in a couple of panels. See them here. A poster for Tori’s 1994 album, Under the Pink, appears in Death: The Time of Your Life.

In addition to providing a blurb for Neverwhere, and later a house for Neil to write in (for which he thanks her in American Gods) Tori wrote a typically-Tori/Delirium intro for Death: The High Cost of Living:

It’s funny but on good days I don’t think of her so much. In fact never. I never just say hi when the sun is on my tongue and my belly’s all warm. On bad days I talk to Death constantly, not about suicide because honestly that’s not dramatic enough. Most of us love the stage and suicide is definitely your last performance and being addicted to the stage, suicide was never an option – plus people get to look you over and stare at your fatty bits and you can’t cross your legs to give that flattering thigh angle and that’s depressing. So we talk. She says things no one else seems to come up with, like let’s have a hotdog and then it’s like nothing’s impossible.

She told me once there is a part of her in everyone, though Neil believes I’m more Delirium than Tori, and Death taught me to accept that, you know, wear your butterflies with pride. And when I do accept that, I know Death is somewhere inside of me. She was the kind of girl all the girls wanted to be, I believe, because of her acceptance of “what is.” She keeps reminding me there is change in the “what is” but change cannot be made till you accept the “what is.” Like yesterday, all the recording machines were b R e A k I n G D o W n again. We almost lost a master take and the band leaves tomorrow and we can’t do anymore music till we resolve this. We’re in the middle of nowhere in the desert and my being wants to go crawl under a cactus and wish it away. Instead, I dyed my hair and she visited me and I started to accept the mess I’m in. I know that mess spelled backwards is ssem and I felt much better armed with that information. Over the last few hours I’ve allowed myself to feel defeated, and just like she said if you allow yourself to feel the way you really feel, maybe you won’t be afraid of that feeling anymore. When you’re on your knees you’re closer to the ground. things seem nearer somehow. If all I can say is I’m not in this swamp, I’m not in this swamp then there is not a rope in front of me and there is not an alligator behind me and there is not a girl sitting at the edge eating a hot dog and if I believe that, then dying would be the only answer because then Death couldn’t come and say Peachy to me anymore and after all she has a brother who believes in hope.

Here are a few bits from the copper beech tree, which used to be a wood nymph, in Stardust:

“And it made me feel all warm and squishy inside, from the tips of my leaves to the ends of my roots.”

“I didn’t always used to be a tree,” said the voice in the rustling of the copper beech leaves. “A magician made me a tree.”

“I was pretty cute as a nymph, too,” she admitted, coyly.

Neil is also “fairygodfather” to Tori’s daughter, Natashya “Tash” Lorien Hawley, whom he mentions in the acknowledgements for The Wolves in the Walls. His much-beloved children’s book, Blueberry Girl, was written as a prayer for Tori when she was pregnant. Hear him read it here:

Finally, I recently stumbled across this adorable video of Natashya Hawley reading from Coraline for its tenth anniversary:

I’m sure I’ve missed something. Fill me in! If you’re a fan of both Neil and Tori, which fandom came first?

* ETA: Some anecdotal evidence states that Neil later confessed to never having listened to the demo, but I couldn’t find an official quotation to that effect to reference. Still, since a few folks in the Tori fan community mentioned it, I thought it was worth including.