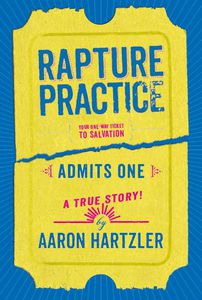 The Rapture is a belief among people who take their religions very, very literally. If you don’t know what the Rapture is, it’s the idea that Biblical prophecy will be fufilled, Jesus and the Angels will come back to Earth. The faithful will be lifted bodily up into heaven. The rest of us sinners are stuck here on Earth, where we will suffer incredibly as we endure the end-times.

It’s can be a very odd and hard-to-comprehend belief, if you aren’t raised with it. Not least because it continually fails to happen when it’s supposed to.

Growing up, Aaron Hartzler’s family, as detailed in Rapture Practice, is not only intensely religious, but they are also firm believers in the Rapture – although they decline to put a day and time on it. Aaron’s father works for various churches, and Aaron and his whole family are completely immersed in a world of extremely strict, very devout Christianity every moment of their day.

The problem, of course, is that from a very early age, Aaron’s restless, mentally and physically. Unthinking faith can only sustain him so long, and when he ages enough to begin asking questions and considering the world around him, he begins running into the walls that his family – lovingly enough – has constructed around him. It is rapidly evident that this isn’t the life for him, and the book explores his gradual, careful attempts to break free.

I read Rapture Practice in two days, very fast, because it is a compelling and exciting read. It is also like reading a novel, in the easy way that some memoirs are written, and this is very enjoyable and very surprising. He does an excellent job of bringing to life not only his parents, but all the other teenagers around him…and indeed, the mental goings-on of a young man trying to figure out who he is instead of who his parents have told him to be.

My first surprise in the book was how very little the Rapture itself actually came up…and of course, this makes sense, when we stop to think about it. It’s all well and good to think Jesus is coming back and scooping you up, but since you don’t know when, you have to get on with your day to day life. It winds up having to be a big, vague reward that may or may not come, in the future. Waiting for the Rapture is like waiting for your ship to come in.

What happens instead is daily life, and it doesn’t matter how religious a family they are, it’s impossible to shut out the entire world and keep Aaron from it. Slowly, he grows up and discovers music and friends, and girls, and beer, and movies. Little events – seeing a movie in a theater! – take on tremendous gravitas and importance when you have the weight not only of God and the religion sitting on top of you but, even worse, the crushing weight of disappointing your parents, even as you know you have to to live.

It’s always interesting to figure out how much of one’s own life you need to bring to a book review, and indeed to the book itself. My parents work for the Catholic church and have done so for as long as I can remember, and so I grew up as enmeshed in a religion as Aaron did. My parents were much less strident, and I don’t think I ever heard the term Rapture, but still. There are only so many ways to grow up in a religious environment and slowly work to come to terms with the wider world, and in that manner, the book resonated against me, like I was a tuning fork.

There are two really remarkable elements of Rapture Practice: one is that Hartzler presents all of these people and their beliefs, his clashes with his parents and the world…and he does it all without judging. There are no sides taken in the book. Is the Rapture right or wrong? Is being extremely devout more or less correct than seeing a rated-R movie? The book doesn’t champion one and hate the other. It simply explores, with delicacy, the balancing act that is everyone’s life, sooner or later.

The second remarkable element of Rapture Practice is one I will not discuss in full detail, because it was a tremendous pleasure as the book rolled along to slowly put little bits and pieces together and realize something major about Aaron’s life. Slowly, I became aware of an aspect of him which I didn’t have fully confirmed until I was done reading. It was an excellent piece of subtle building, and I want to talk about it, but I want people to discover it all their own.

On the whole, Rapture Practice is an excellent read. Very fast, very sharp and enjoyable, and a book I’m going to need to revisit. It was a hard book to condense into a review, and I tend to think that’s a sure sign of a good book.