Jane Austen’s Pride and Prejudice has now been in the world for 200 years, and about four months. So I thought I’d finally get to it. But I didn’t read it to prove Meg Wolitzer wrong, or to fall in love with Elizabeth, or even to be able to name my next fantasy football team “Bingley’s Balls.”

I read it because I finally talked myself into the idea (maybe call it the “Downton Abbey Effect”) that I could be interested in this story, as British and soapy as it may be. And I’m here to tell you (even without stupid zombies), if you’re a dude, and you’ve rejected this novel out of hand (despite its canonical status) because it’s “only for women,” you’re wrong. It IS a good story, and despite your own pride and prejudices about this novel (did you see what I did there?), there’s plenty of fun to be had. Check it: 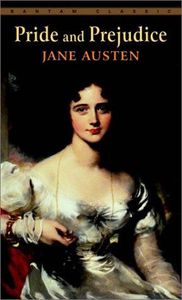 5. It Is GENUINELY Funny—You often hear that Jane Austen’s wit is one of the hallmarks of the novel, and it’s true. Elizabeth is whip smart, and has no qualms about taking her intellect out on her inferiors. At one point, she chides her sister Jane, who she thinks is too happy and too willing to only see the good in folks, about her crush on Bingley: “Well, he certainly is very agreeable, and I give you leave to like him. You have liked many a stupider person.”

Next, when Elizabeth’s “cousin,” Mr. Collins — who is total tool, but as such, a cringe-inducing comedic scene-stealer — proposes to Elizabeth. You can almost see her giggling to herself, as she rejects him. But he vastly misreads the situation, thinking she’s just playing hard to get. “…and that sometimes refusal is repeated a second or even third time. I am, therefore, by no means discouraged by what you have just said, and shall hope to lead you to the alter ere long.” By now, we’re all laughing along with Elizabeth, and she exclaims: “Upon my word, sir. Your hope is rather an extraordinary one after my declaration.” (Translation: “Seriously, dude!? What the f#$% is wrong with you? NO!”)

4. Two Words: Mr. Bennet — Elizabeth’s father is, by far, my favorite character in the novel. The man — surrounded by his five daughters and his annoying wife — is a saint. So, to stay sane, he’s always cracking jokes. For instance, early in the novel Mrs. Bennet comes back from a ball and begins describing to her husband all the ladies the new “it” guy Bingley danced with. Bennet breaks off this: “If he had had any compassion for me, he would have danced half so much! For God’s sake, say no more of his partners. Oh that he had sprained his ankle in the first dance!” C’mon, that’s hilarious! It’s the 19th century equivalent of that commercial where the guy has to listen his lady for five seconds, and gets a Klondike bar as a reward. (Yes, I know it’s sexist, but it’s also funny.)

3. Elizabeth’s Introspection/Change — If you’re like me, watching a character examine his/her conscience and, as a result, change over the course of a novel is infinitely fascinating — and Elizabeth is a fascinating character. Once she realizes her opinion of Darcy is not only wrong, but also that it had been based on faulty premises and rumors, she is able to overcome her own pride and embrace the possibility of her feelings for him. As she reflects on Darcy’s proposal, she thinks, “But vanity, not love, has been my folly….Till this moment, I never knew myself.” Would that we could all have such moments of clarity and catharsis!

2. Real Drama and Intrigue — You hear “novel of manners,” a subgenre in which Pride and Prejudice is often pigeonholed, you may want to run the other way. But, listen, there is real drama and page-turning intrigue here. I’m not kidding. For examples: Darcy and Elizabeth’s conversation when he first proposes (“In vain have I struggled, etc.”), Elizabeth’s showdown with Darcy’s aunt who doesn’t think her worthy of her nephew, and the drama around Elizabeth’s sister Lydia’s who runs off with one of Darcy’s mortal enemies. (And, earlier, we’d learned that this same guy had nearly succeeding in seducing Darcy’s sister, as payback for a perceived slight. Damn, that’s cold!)

1. Add To Your Quotes Bank — This novel is chock full of wisdom — and you can memorize these quotes and impress your friends at parties. For instance, Elizabeth’s sister Mary breaks off this gem: “Pride relates more to our opinions of ourselves, vanity to what we have others think of us.” Yes!

Or Darcy busts out this one: “Nothing is more deceitful than the appearance of humility. It is often only carelessness of opinion, and sometimes an indirect boast.” The origins of the humblebrag, yes?

And finally, during one of Elizabeth’s and Darcy’s first conversations, she tells him, “It is particularly incumbent on those who never change their opinion, to be secure of judging properly at first.” Of course, she’s being tongue-in-cheek — but it’s a brilliant sentiment and a knock on anyone (which seems to be a lot of people these days) who is unwilling to change an established opinion, despite new information.