Warning: This post contains spoilers for Game of Thrones (all the series), the Harry Potter series and The Hunger Games, so reader beware if you care about spoilers. Spoiler alert: I don’t. 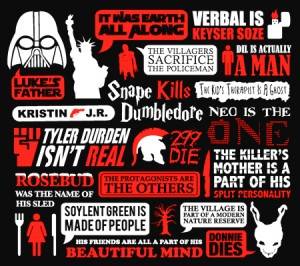 Gotta have the shirt? Get it at Threadless.

I’ve never been the kind of person that gets too uptight about spoilers. If I’ve had the opportunity to read or watch something — the book is past the publishing date, the show has already played on television — then I don’t feel like I have much of a right to complain if I come across a spoiler. There’s nothing that makes me roll my eyes more than seeing a chorus of “Stop talking about X because I haven’t seen it yet!” come up on social media; if you’re worried about being spoiled, it’s your job to avoid it, not the rest of the world’s job to protect you.

It’s possible that I’ve adopted this attitude, however, because the person in my life most likely to “spoil” me is, well, me. My name is Kim, and I’m addicted to spoilers.

Looking back, I think I’ve always had a predilection for spoilers. I remember gobbling up any and all news I could find out about each new Harry Potter book as the series progressed. After J.K. Rowling announced a major death in Harry Potter and the Half-Blood Prince, I semi-actively sought out news until I confirmed Dumbledore’s death (but not the circumstances surrounding it) before the book was officially released.

But this spoiler problem has gotten progressively worse. When I was reading Game of Thrones for the first time, I couldn’t remember who was who; Theon Greyjoy, for whatever reason, stumped me every time he showed up in a chapter. When I came across a character that I knew I should know but couldn’t place, I’d grab my phone and hop on Wikipedia to get a reminder.

But I would also skim over information I wasn’t looking for, unintentionally (at first, anyway) revealing plot points that would show up two, three or four books later. I knew Robb Stark would die at the Red Wedding before I even knew who Edmure Tully was (sob!). I knew Joffrey was going to marry (or almost marry?) and then die (joy!). I knew that Dany would get her dragons (huzzah!). At this point, I know what happens to my favorite characters in all five books although I’ve only read two of them.

Spoiling myself is both liberating and frustrating. There’s no plot question I hate more than “Will they or won’t they?” I think love triangles are boring, so any time I can hop online and and find out that yep, Peeta and Katinss end up together, it makes me feel calm and, I think, helps me pay attention to the book more carefully because I’m not rushing to have a single question answered.

But spoiling myself also keeps me from being surprised. Spoiling myself is a direct result of being an impatient reader, a reader more interested in the destination than the journey. And while sometimes that’s ok — especially if the book is one where I don’t really care about either (coughTwilightcough) — there are other books that earn the destination because of the journey. I almost looked up a summary of The Round House because I wanted to know who raped Geraldine, but I held off, making the conclusion all the richer.

I’m not sure what I should do about this spoiler addiction. I’m working to fight it when I think it matters, but my curiosity to know the ending often overrides any sense of propriety I have about remaining and unspoiled reader.

Hi. My name is Kim, and I’m addicted to spoilers.