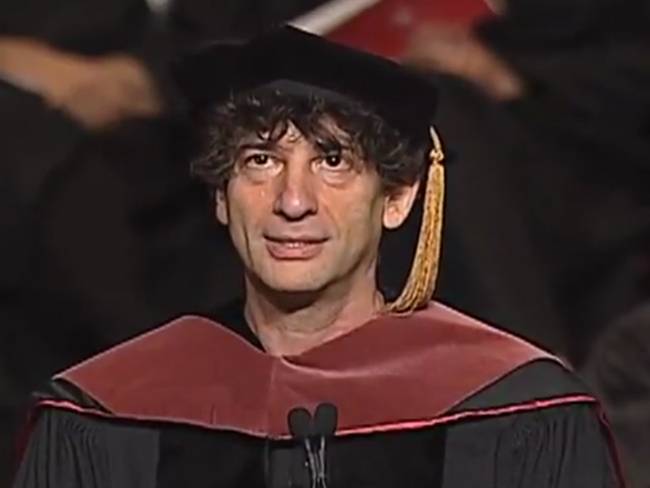 It’s graduation time again, people! The smell of potential energy is in the air and speakers everywhere are preparing to impart some wise words on graduates across the land. I’m a sucker for commencement speeches, especially ones that take a staid formula and personalize it in a way that seems impossible given the limits of the subject and the occasion. Every year as the academic year winds down I return to two (very well known) favorites of mine, “This is Water,” by David Foster Wallace, and “Some Thoughts on the Real World by One Who Glimpsed It and Fled,” by Bill Watterson, both given at Ohio’s Kenyon College. My love for these two got me searching for other great commencement addresses delivered by writers. For full effect, throw on your old graduation robes (or a bathrobe and shower cap, at least), cue up “Pomp and Circumstance,” blast it at full volume, and march a couple of laps around your house before settling in.

The author of the Harry Potter series and The Casual Vacancy expounds upon the fringe benefits of failure, the importance of empathy, and the responsibilities of those in privileged positions.

“Talent and intelligence never once inoculated any one to the caprices of fate.” – J.K. Rowling

Lewis, a Princeton alum and author of the bestsellers The Blind Side, Moneyball, and The Big Short, delivers a baccalaureate address on the illusion of success’ inevitability and the value of luck.

Seventeen years after her own graduation from Depauw, Barbara Kingsolver, fellow Kentuckian and author of The Poisonwood Bible, The Lacuna, and Flight Behavior, speaks about the complications of feeling at home in an unfamiliar place and the sometimes unseen connections between disparate topics that constitutes a valuable education.

“It began to dawn on me that learning how to be in a place where I didn’t seem to fit in was going to be part of my education.” – Barbara Kingsolver

Night author and human rights activist Elie Wiesel speaks with graduates about the lessons of history, the value of diverse communities, and the instructive nature of the “other.”

Erdrich, who graduated from Dartmouth in 1976 – with the first crop of four-year female graduates, no less – spins a couple of yarns about her time at the school and speaks to her alma mater’s graduates about the fear of failure and the power of knowledge when combined with love (all this from behind a lectern made from the trunk of some ancient tree).

“You have to risk humiliation or failure, if you want to move forward… if other people’s opinions are not personal to you – good or bad – you have the freedom to be who you are.” – Louise Erdrich

In what can only be called a breathless, rapid fire speech to graduate students at Emerson College, renowned playwright Tony Kushner (Angels in America, Lincoln) examines the hard times contemporary students (and citizens at large) face and the importance of their role in the nation’s future.

“‘I would never teach oratory,’ your founder declared, ‘if words were not, in their true nature, divine things, if they were not forms of the spirit and of the soul.’ Amen to that.” – Tony Kushner

1776 and John Adams author David McCullough delivers a passionate paean to the city of Boston and its rich history, using anecdotes about our second president’s resiliency and devotion to the cause of revolution to inspire graduates to action and sacrifice.

“In a vital community, as in one’s life, education ought not to stand still.” – David McCullough

Best-selling Bostonian author (and UMass dropout) Dennis Lehane dispenses with traditional platitudes, offering graduates a slightly more frank appraisal of their responsibility to respond to a jaded culture and recognize the help others have given them throughout their lives.

An unwell Bradbury delivers an inspiring message to graduates from his home about his pursuit of all the things he was told not to fall in love with as a young man, including Edgar Allan Poe, movies, and dinosaurs. (Bradbury’s part begins about 7:40 into the video.)

“All of my early life, I could never go to college; I went to the library and went three or four days a week. I graduated from the library when I was twenty-eight years-old.” – Ray Bradbury

We weren’t going to get away without including this gem, right? This now famous address is being turned into a book, due out May 14, and for good reason. Gaiman’s advice to young artists is kind, poignant, and wise. No matter what happens or where you are, “Make good art,” is his one commandment.

“I learned to write by writing. I tended to do anything, as long as it felt an adventure, and stop when it felt like work, which meant that life did not feel like work.” – Neil Gaiman