It’s rare these days that a book is legit banned, but man, do we still love to at least challenge the hell out of them! The American Library Association released their Top Ten list for 2012 this week, and they are:

They were challenged based on the following reasons: 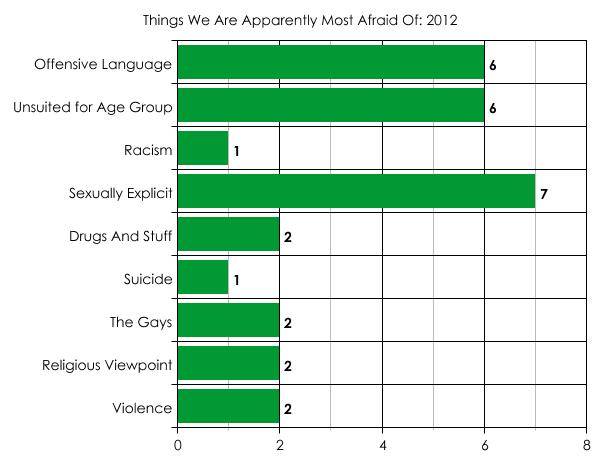 Apparently, racism and suicide = not so bad; sex = GET THE HELL OUT. Sounds pretty accurate. 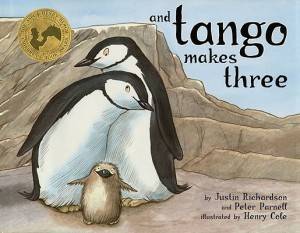 Penguins. You make me sick.

Oy, with the gay penguins already! And Tango Makes Three is a picture book about the real life story of two male penguins raising a chick at the Central Park Zoo. I own it and it is nothing but sweet. It doesn’t even use the word “gay,” just discusses the always relevant lesson of how families can be different but still full of love. I know, blasphemous. Yet people have been battling it since the day it came out. It has been the NUMBER ONE most challenged book for FOUR of the last seven years. (Another time, it was number two on the list, because the ttyl series by Lauren Myracle was clearly trying harder that year.) But then in 2011, Tango didn’t make the list AT ALL. I remember thinking, “Huh. Maybe we as a society have moved past gay penguins.” I might have even felt something akin to pride. Well, guess not, folks! 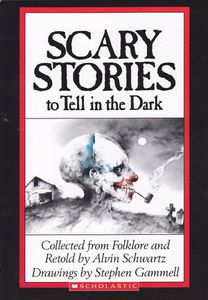 I also guess we’re okay with witchcraft by now, being that Harry Potter hasn’t made the list in quite a few years, but this was apparently the year to be super anti-underpants. Considering the Captain has been working his evil underpantsy deeds since 1997, you might be a bit behind on this particular outrage, America.

It also chagrins me to say it, as I typically carry the anti-censorship banner as high as I can, but E.L. James has foiled things once again because, well, for the first time in a long time, I can at least understand why a school library (or any library?) would want to challenge Fifty Shades of Grey.

The list also includes winners of the Pulitzer Prize, the National Book Award, and the Printz. See the full list for this year as well as lists from the last decade here.