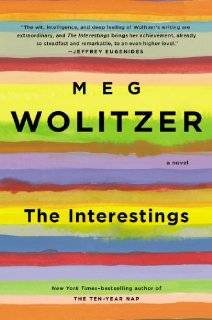 Meg Wolitzer’s ninth novel, The Interestings, was published April 9, and readers and critics alike are raving. Our own Rebecca called it “really fucking good.” And then: “If Meg Wolitzer isn’t widely recognized for writing one of the best books of the year, I will eat my shorts.”

The novel’s about a group of friends who meet at an art camp, form a bond, and then grow into adulthood together. Evidently, it’s not always smooth sailing.

The soft-, but outspoken, author has done several interviews, both about her novel, and about “women’s fiction,” a term she hates. Here’s a sampling of the best of Meg Wolitzer’s recent press:

On the origins of The Interestings: “In The Interestings I wanted to write about what happens to talent over time.  In some people talent blooms, in others it falls away. And, relatedly, there are other ideas in here, like about the quiet envy people can have even for those they love and what happens to friendship over years and decades. I’m surprised I hadn’t thought to do this book earlier, because my experience as an adolescent at “this” camp  [a similar camp she went to in a similar setting at age 15] was the spark for so many things.  There are junctures in life, times when things change.  This was one for me.”

Read the whole interview here — it’s the much ballyhooed one with the headline “Men won’t read books about women.”

On talent, in her novel as in life: “I guess I felt, when I was writing this novel, that talent is this sort of interesting, strange, ‘slippery’ thing, as a character describes it in my novel. Are you talented if there’s no product to go with it? If you don’t become really big? Are you still the same artist that you would’ve been if nobody recognized you? All those questions are very much present.”

And on Wolitzer’s own experience at a summer camp: “I began to be a little different. And to have aspirations that were maybe bigger. Something had been lit in me that’s got un-lit again.”

Listen to the whole interview here.

On VIDA numbers and how fiction is perceived, in conversation with her long-time editor, Sarah McRath:

McGrath: Of course, this topic of how fiction is perceived, big or small, is something you wrote about in a now famous essay in the New York Times Book Review almost exactly a year ago. Which came first, the ambition and vision for the book, or the insights that went into the essay?

Wolitzer: I have a chicken and egg answer, I think. I’ve been absorbed for a long time in questions about men and women and fiction; I tried to address them—or impale them—in The Wife 10 years ago. Since that time, these ideas have sometimes found their way sort of obliquely into my fiction, and other times they’ve simply made for a passionate conversation.

I knew I wanted to write an essay about this, because it was what I thought about all the time. As I kept playing with ideas about the different ways literature by men and women is often treated, I was also deep into The Interestings. But as I mapped out the essay, I may have also (coincidentally or not) allowed myself to try and put a little more unconflicted muscularity and energy in my novel. I mean, you may not be able to control how your book will be treated, but no matter who you are, you have to write what absorbs and preoccupies you. There’s no point otherwise. Thinking directly about gender issues, which do absorb and preoccupy me, I guess—and also looking at the atrocious VIDA numbers—did light something up in me, and at least some of that light was applied directly to my fiction.