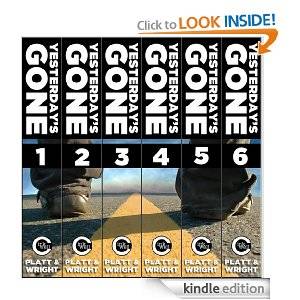 Sean Platt is an experienced copywriter, and he knows how to write fast. Since 2011, he has turned his quick-fingered talents to writing fiction, and with his writing partner David Wright (under the name “Collective Inkwell”), he has been writing serials. Their first series, Yesterday’s Gone, is 700 pages long – and it was written in 7 weeks. It’s an impressive feat of stamina, but what makes Platt’s and Wright’s business model so special is that it doesn’t create novels – it constructs serials, fashioned like television shows.

Yesterday’s Gone is a post-apocalyptic thriller in which an ensemble cast of characters try to work out why the world ended. Each 100-page “episode,” released on Amazon in Kindle format for a micropayment, is structured like a TV show – the same thematic arching structure, the same reliance on cliffhangers and hooks to entice the reader to get the next instalment – and once each book (read “season”) is complete it’s also bundled and sold at a more conventional price. However, it’s Platt & Wright’s use of Kindle Select that has reaped the most rewards: by experimenting with offering their first episode for free (a feature of the Kindle Select program), they managed to drive a lot of readers deep into the series in much the same way a successful TV show’s pilot episode hooks its audience for the duration.

Season 1 of Yesterday’s Gone was released in 2011, and it has now been followed by two further seasons to complete the story, and by other titles built around the same model. How successful has it been? At the turn of 2013, the “boxset” of Yesterday’s Gone season 1 was out-downloading Stephen King in Amazon’s Horror Literature category on Kindle. In 2012, Amazon announced they were building a serializing functionality into certain upcoming Kindle ebooks – you would buy the full product and episodes would automatically upload when they were ready – and for their flagship product, they turned to Platt and Wright. Their Z 2134, a zombie survival tale in the style of The Walking Dead, was released in instalments in late 2012.

Is this a brand new way to sell books? Absolutely not. If Charles Dickens were alive today, he’d probably be slapping Creative Inkwell with a lawsuit. Just as the Pickwick Papers became a 19th-century publishing phenomenon by being sold as installments costing a shilling each, the new serialized fiction model creates marketing buzz as it goes while also creating a “funnel” for readers to form a lasting purchasing relationship with an author. The more work you have published, the more you have to guide your reader towards to turn them from a fan of your book to a fan of your work, period. With serialized writing, you have a breadth of content to help you do this.

It’s also important to look at what Platt & Wright aren’t doing. Their approach is episodal from the get-go: instead of taking a finished book and chopping it into 6 parts, they’re creating a story in 6 acts, using all the audience-hooking techniques familiar to fans of arc-driven genre TV. They’re also continually experimenting with their pricing models – for example, each episode of the current season of their story Available Darkness is available for free for a limited time after its weekly release, and if newly-hooked fans don’t want to wait for weeks to see how the story ends, they can buy the boxset immediately…

Want to sell lots of books on Kindle? Keep an eye on these guys. To be continued…