This is a guest post by Derek Attig. Derek is a graduate student in History at the University of Illinois where he is writing about bookmobiles in American culture. Particularly interested in the relationship between information technology and the reading life, Derek was a 2012 Google Policy Fellow at the American Library Association’s Office for Information Technology Policy. Oh, and he blogs at bookmobility.org. Check it out!

I came late to science fiction—or, at least, later than many other fans. Many have solid, childhood origin stories: their passion was kindled by reading Asimov and Heinlein by flashlight under the covers, or by seeking out Star Wars novelizations after wolfing down the films on VHS.

Me? I was always skeptical. Aliens, you say? Or, worse, fiction about…physics? Warp drives left me cold and space operas left me more lost than an Italian libretto. But then I stumbled onto the margins of science fiction, where the preoccupations of the “hard” sci-fi (technical specifications, the laws of physics) and the obsessions of the softer stuff (alien societies, interstellar high politics) give way to the unexpected, the strange, and the just plain wonky.

In my favorite kind of this sort of novel, the narrative world is pretty familiar (give or take a dystopian touch or two) and very human. That is, until a bit of science fiction kicks that world in the head. The story follows what happens in the aftermath. It is, to belabor the metaphor, an MRI that lets us see, in vivid detail, the consequences of being smacked upside the head by something really, deeply weird. 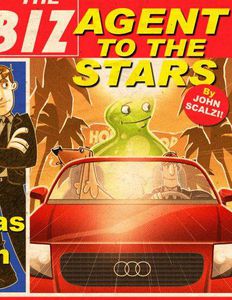 I imagine I’ll be writing more about these sorts of stories in the months to come, but here I want to talk about one particular sub-genre of this type—we might call it entertainment industry sci-fi—that I’m finding absolutely fascinating. Here are four premises, to give you a taste of what these books have to offer:

An alien walks (or slimes, rather) into a Hollywood talent agency seeking representation.

An alien dressed like a nun walks into an entertainment lawyer’s office with a question about music royalties.

A teenager in a dystopian future plays a video game to save the world from an evil tech company.
In this peculiar sub-genre, John Scalzi is the king of meta. In the charming Agent to the Stars (published online in 1999 and on paper in 2005), a Hollywood talent agency is approached by an alien race eager for representation. Having noticed that earthly entertainment tends to portray non-humanoid aliens in a rather, um, murder-y light, they’re a bit concerned. They need some help to make a good impression: see, they’re a friendly bunch, but they look like blobs of mobile, foul-smelling snot. Hijinks ensue—involving a dog, a sweet-but-empty-headed starlet, a Holocaust biopic, and a mishap at a special effects studio—that lead to the aliens unmasking themselves onstage at the Oscars. It’s a fun, if not flawless, ride, offering a strange but incisive glimpse at an industry weirder than any science fiction story. (Rob Reid’s similar novel, Year Zero, published last year, follows an entertainment lawyer who’s approached after some aliens realize they’ve been pirating Earth music and owe an unspeakable sum in royalties.

In his more recent, and loudly acclaimed, novel Redshirts, Scalzi ups the meta by a factor of at least a zillion while also managing to deepen the story’s human drama. The junior crew aboard an interstellar space ship suddenly notice that their colleagues keep getting killed off while others onboard survive any situation, no matter how dire. Soon, they realize that they’re part of a (truly, truly terrible) television show, and several of them head to twenty-first-century Hollywood to make it right. It’s a clever premise, but cleverness is the least of the book’s accomplishments. It’s a thoughtful exploration of agency and constraint, of fate and narrative form. And, most of all, it’s humane in ways that a sci-fi satire has no right to be. 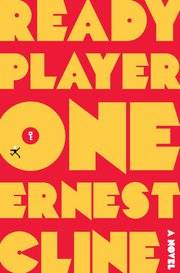 And speaking of humane, there’s also the somewhat less innovative but deeply satisfying Ready Player One, by Ernest Cline. Set in a dystopian future where people spend more time in a virtual world than in the broken-down real one, Ready Player One follows a teenager as he tries to win a worldwide contest based on role-playing and video games from the 1980s. It’s a nostalgia-fest and a classic quest narrative (without, thankfully, as many of the daddy issues that tend to plague that kind of story). But it’s also, despite the genuine fun of the story, also a striking look at the effects of the entertainment and tech industries on human relationships.

Next up for me? Cory Doctorow’s Pirate Cinema, which looks like it will combine the intellectual property plotline of Year Zero, the dystopian near-future and tech-savvy teenage protagonist of Ready Player One, and the hard-earned geek pedigree of Scalzi’s books. I can’t wait.