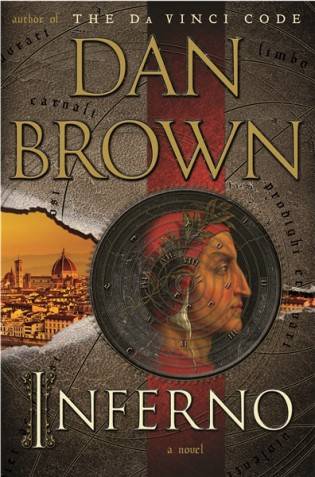 Dan Brown’s first book since 2009, Inferno, will magically appear on ereaders and bookshelves this May. Are you excited? I am… ish. The Lost Symbol was kind of a disappointment for me, and there are things about his books that drive me crazy. But I’m always willing to give books related to art a shot; and as far as outlandish conspiracy thrillers go, Brown’s novels usually deliver.

Inferno puts Robert Langdon back in Europe, which I think we all can agree is a good thing. To be honest, I was hoping the Langdon series was finished and Brown would move on. The Adventures of Robert Langdon: Symbologist! are getting just a tad formulaic. In fact, I think I can make some pretty solid predictions about what will happen in Inferno and see how spot on they are come May.

(Note: I reserve the right to make fun of these books because I am an art historian.)

1. Science–There’s always some outrageous science element in Robert’s Perambulations in Symbology (TM). For Inferno, I’m going with using 3D printing to bring people back from the dead. That’s probably not outrageous enough, but I think there will definitely be some resurrection stuff happening. Also, the Arno will flow backwards. I don’t know why.

2. Art–Who loves art? We do, we do! I can’t imagine Brown would let Florence go without mentioning Michelangelo, so I’m going to predict there are secret messages hidden in the Laurentian library that somehow tie to the statue of David. There will also be secret messages in Nardo di Cione’s frescos of Divine Judgement in Santa Maria Novella, Botticelli’s Garden of Earthly Delights OR Venus (the latter could tie in well with a goddess cult sub-plot), the Chapel of the Magi frescos in the Medici-Riccardi Palace by Franco Cardini, and the frescos in the Convent of San Marco.

3. Secret Organizations–What’s a Dan Brown novel without a secret society or a conspiracy? That’s like having a birthday with no cake! Three words: Medicis, and hidden gold. Oh, there will be gold.

4. Religion–Just as there will be a secret organization, you can bet there will some religious elements in Inferno, as well. Five bucks says Savonarola is at least mentioned. With the GOLD. And the MEDICIS.

5. Locales–There are only about a billion religious/artistic sites in Florence, which gives Brown more than enough to choose from. But if I had to guess, I would say in addition to the places mentioned above, Langdon will find an excuse to go to the Duomo and Baptistry of Florence (that’s a no-brainer), Santa Maria del Carmine, the Basilica of Santa Croce, Fiesole, and Orsanmichele just because it’s relatively obscure.

6. Fifty Shades of Grey Tie-In–Haha! I don’t really think this will happen, but it would be hilarious if it did. *crosses fingers*

7. Long-Lost Loves–If Brown has anything of an artistic soul in his turtleneck-clad chest, I’m thinking either one of the previous women Langdon’s hooked up with (does anyone remember their names? I don’t) will show up in Inferno OR we’ll meet a pre-Symbologist! crush of his, as per the Beatrice-Dante connection (Beatrice Portinari was Dante’s true love who died and subsequently led Dante through heaven in the Divine Comedy). And said woman will naturally lead Langdon through the labyrinth of Florence locales, religion, secret societies, art, and science. To do otherwise would be an egregious waste of an opportunity, in my opinion. I think seeing how Beatrice is brought into the story is what I’m looking forward to in Inferno. I would say “the most” but really it’s the only.

What are some of your predictions for Inferno?