On the face of it, Isaac Asimov doesn’t seem like that difficult an author to get into…and really, he’s not. His prose was always straight-forward, simple, and readable. It was absolutely bare-bones, something he was unapologetic for, and that seems easy enough. It just gets intimidating when you zoom out a little and realize that he wrote over 400 books. True enough, there’s some contention about how many books he actually wrote…but frankly, if your body of work is so huge as to generate contention, then it doesn’t matter how many books are in it. It’s big. So where does one start? With this article, actually. 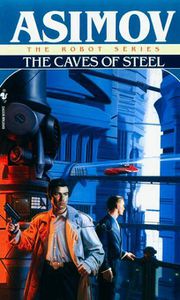 START WITH: The Caves of Steel

Now you might be looking at that choice a little oddly and wondering why I’m not going for the obvious Asimov titles. Why not I, Robot, which is the first robot book? Why the second? Why not Foundation, one of his more famous books? Simple. I, Robot, while a very groundbreaking and brilliant book, is a collection of disjointed stories that might put off a reader in ways that the unified story of a novel won’t. And while Foundation might be one of Asimov’s most ambitious works, both in terms of ideas and scale, it’s also a more complicated novel made up of different stories told from different points in history.

What Caves of Steel has going for it is that it offers a whodunit detective story, a genre that Asimov loved as dearly as science fiction. It’s a book that brims with enthusiasm and love and fun, and it’s exciting to shoot through it. It’s as fun as watching a Columbo murder-mystery movie…except this has robots in it. Robots improve everything. That’s just a fact. The story presents us with Elijah Baley, a detective from the overcrowded New York of the future, an Earth where people are so used to being packed in and living their lives in tiny apartments and hallways, the mere hint of a stretch of land is enough to cause panic attacks. Elijah Baley is one of Asimov’s strongest characters, and not least because of his relationship with his partner, R. Daneel Olivaw. R stands for Robot. They are, in my opinion, one of the finest and most enjoyable detective duos you can find in books, and it’s a pleasure to revisit them.

Reading The Caves of Steel will provide you with the small amount of acclimation you might need to read Asimov. That taken care of, we can head on… 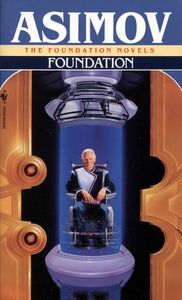 From there, we head into the major leagues with what might be Asimov’s science fiction novel stuffed with his biggest and most ambitious ideas. Hari Seldon and his group of psychohistorians have figured out mathematically that the great and timeless Galactic Empire is crumbling and will collapse over the next few centuries. To deal with what he sees as the certainty of approaching chaos and barbarism, Seldon proposes that a Foundation be set up, deep in space, populated with all of the greatest minds the Empire can provide. They will follow their own intellect and Seldon’s grand and mysterious plan to ensure that over the course of hundreds and hundreds of years, the collapse and reconstruction of the Empire proceed exactly on a schedule.

The book skips generations, visiting successive generations of the Foundation and its leaders in a series of what are essentially short stories. The changes don’t feel particuarly abrupt, because while Asimov’s style might be plain, he was always a very gifted writer and the characters welcome you instantly into each story. There’s a great many ideas bubbling around in the book beyond the simple plot-ideas of the collapse of an Empire and the birth of a Foundation. There are moral questions about what it means to allow the Empire to collapse, what it means to remain technologically superior–but also morally superior–to the primitive cultures that grow up around you. Many of the questions surrounding Hari Seldon and whether or not anyone should listen to his Master Plan wander into almost theological territory…but never so heavily that you feel as if you’re reading a tedious allegory. The stories come at you light and fast and easy, but they leave an awful lot behind when you’re done. 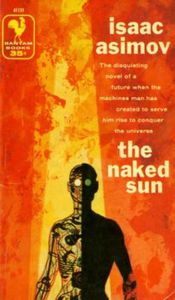 UP NEXT: The Naked Sun / Foundation & Empire

From those two books, you head on toward their sequels. Asimov was a big fan of sequels and series of books, but one of his many talents was managing to produce them without just providing diminishing returns. Where Foundation is a blast of ideas, Foundation & Empire continues to methodically follow them, expanding the universe and the story of the Foundation to even greater heights and depths as Asimov continues to explore the complexities of the situation he laid out.

Likewise, in The Naked Sun, Asimov not only gives us a further whodunit as dealt with by Elijah Baley and R. Daneel Olivaw, but he takes the action out to a Spacer planet, Solaria, where Baley’s culture again comes into sharp contact against another. The population of Solaria is tightly controlled, kept at twenty thousand individuals on the whole planet. There is no physical contact, and an abundance of space. Baley is used to being crammed in around people. The physical contact makes the Solarians uncomfortable. The abundance of space makes Baley uncomfortable. Somewhere in this is a wealth of crime-solving, robots, and brilliant character-work and dialog.

Having thus explored some sequels, you’re more or less ready for anything Asimov can write. At least in the fiction department. He wandered all over and wrote a wealth of nonfiction books on a great many subjects. I’m not sure those have aged nearly so well as his fiction. You’ve got fiction to keep you busy for a while now. The Foundation series continues on from here, and so does the Robot series (and in time, they start to blend together in interesting ways). Then there are other individual books like Fantastic Voyage and Fantastic Voyage II, the brilliant Nightfall, a small science fiction book I never hear talked about called The Gods Themselves, and another one called The Currents of Space. (And if you become a great fan of Asimov, may I suggest looking up a collection of his letters put together by his brother. It’s called Yours, Isaac, and it is sweet and charming.)

The other nice thing about reading all this Asimov is, he shares an awful lot in common with many of the great pulp writers, like Alfred Bester, Theodore Sturgeon, Damon Knight, Charles Beaumont, and many others. Asimov is kind of a gateway drug to this wonderful world of early 20th century fiction. You’ve got a lot of reading to do, so get to it. I’ll be here, playing with my robots.