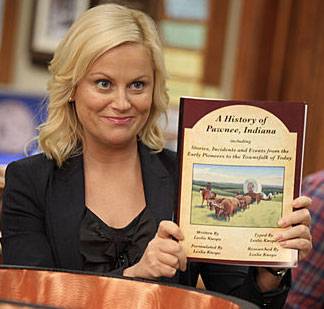 It’s been a good couple weeks for fans of NBC’s “Parks and Recreation”–we are legion here at the Riot–as news broke that two of our favorite cast members are due to publish books. First there was the announcement that Nick Offerman, the mustachioed man who plays meat-loving Ron Swanson, has a forthcoming memoir called….wait for it because it’s awesome….Paddle Your Own Canoe. Then, yesterday we found out that Amy Poehler, who plays my spirit animal and patron saint Leslie Knope, has inked a deal for an “illustrated, non-linear diary.” I don’t know what that is, exactly, but I’mma read the shit out of it no matter what.

How do I feel about Nick Offerman and Leslie Knope writing books? I feel like this:

When I got done flailing, I started imagining other memoirs by Parks & Rec cast members. I mean, I sure hope there’s a lot of Leslie Knope in Leslie Poehler.

Now Let’s do this. Add your own in the comments, fellow P & R fans!

Thanks for Noticing: A Memoir by Jerry Gergich

Live-Tweet It by Retta (you’re following Retta, who plays Donna, on Twitter, right? You totally should be.)

My Horizontal Life: A Collection of One-Night Stands by Mark Brendanawicz

Treat Yo’Self: Shop Your Way to Happiness by Tom Haverford and Donna Meagle

Perd’s the Word for Perd-verts: A Book That is for Reading by Perd Hapley [another Preeti Chhibber creation]

Sink a Start-Up in Six Easy Steps by Jean-Ralphio

Joke for Accountants by Ben Wyatt

‘Apps and ‘Zerts: Dining Out the Haverford Way

No, Really, I Was Only Pretending to Care: April Ludgate’s Tips for the Secretly Enthusiastic