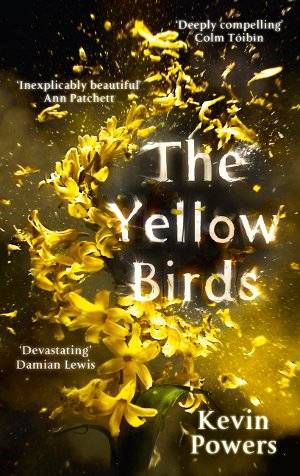 Johann: As I write this, I am looking at the bracket for the Tournament of Books so I know which book The Yellow Birds is up against, or in this case, which books it’s up against. Though I have read neither Billy Lynn’s Long Halftime Walk nor Fobbit, I am pretty confident that The Yellow Birds is out. I gotta say… I was really not a fan. Kevin Powers writes beautifully, of that there is no doubt, but the pacing of the story is glacial, to say the least, and the endless introspection got tired early on, and then continued throughout the rest of the book.

The whole time I read it I was reminded of another beautifully written war book, The Things They Carried, which achieved what I think Kevin was going for but did it without boring me. What do you think Rachel, am I being too harsh?

Rachel: I think it’s inevitable to compare any war novel to The Things They Carried; it is one of the most widely read modern classics, and I think most people who have read Tim O’Brien’s Vietnam novel will draw parallels. I don’t necessarily think that’s a fair comparison though, especially since The Yellow Birds takes place in the aftermath of a war, not during the actual battles. I think the intentions of the two books are very different. So maybe a little bit harsh…

But actually I very much enjoyed The Yellow Birds; it was one of my favorites of 2012. And I’m surprised that you found the pace so slow because I was completely captivated by the very subtle suspense that Powers created. The story the narrator tells and the climax he builds to, I thought, is both gut-wrenching and psychologically fascinating. I am curious what you make of pacing and the psychological core of the narrative, considering that Kevin Powers is a war veteran. Do you think that your frustration with the pace is a result of the author’s experience, that he was too enmeshed in the war to create a more compelling narrative?

Johann: Well, for one, the novel is split between the main character’s (I can’t even remember his name) life after the war and during the war. And the parts that happen on the battlefield are drawn out, while they should really be the more exciting parts of the book. It felt like reading about him walking during the war and then thinking “How do I feel about this step I just took?” instead of describing the action all the way through. I also felt that the suspense had been taken away from the reader (we know Murph is going to die) and we are simply left with a little curiosity (how does he die?). So we read on, back and forth between the past and the present, about the empty shell of a man the main character seemed to me.

My favorite scene in the book is the one that takes part in the bar in Germany. Again, Kevin Powers writes very well, and here it seemed that he let the introspection go and just told us a good story. The same is very nearly true about the scene where, home after the war, he goes out to meet friends but just watches from afar. I know Kevin Powers is a veteran of the Iraq War, but the way he writes, it feels like he wants to approach it from a distance instead of bringing the reader into his world.

What about Billy Lynn’s Long Halftime Walk, or Fobbit? Have you read them? What do you think of The Yellow Birds’ chances against them in the tournament?

Rachel: I see your point about feeling distanced from the story, and Powers not wanting to let readers get too close. Normally I’m a very plot-driven reader, so it’s interesting to me that language of the novel was enough to keep me going. I will argue though that the suspense factor – while it was mitigated from the beginning by knowing that Murph dies – built slowly, until it became unmistakable that the narrator was hiding something. And then the climax – I think that was so shocking and so emotional it was easy to ignore some of the flaws leading up to that conclusion.


That being said, I haven’t read Fobbit, but I just finished reading Billy Lynn’s Long Halftime Walk, and I absolutely loved it. As much as I liked The Yellow Birds, there’s something very authentic about Billy Lynn that I just don’t think Powers captured as well. All three crucial elements – plot, character and language – are done exceptionally well in Billy Lynn and I don’t think The Yellow Birds has much of a chance in comparison.

And now, having read some of its competition, The Yellow Birds seems to be all about the language, and less about a dynamic narrative structure. You’re starting to convince me that it’s not as well-formed a novel as I’d originally thought. Powers is a beautiful writer, to be sure, and I think the language may have dazzled me a bit; but on closer inspection, the overall piece doesn’t hold up.

Johann: Just from the reviews I’ve read of both Fobbit and Billy Lynn’s Long Halftime Walk, I’m thinking that, though it is very well written (did we mention that before), it just doesn’t have enough of that… special something to get it into the next rounds. Again, I was really prepared to like this book, but the pacing didn’t hold me and I felt that Mr. Powers missed his chance to say something meaningful about the war; nothing about whether he thinks the US should or should not be there, or war in general. Just sort of… a guy goes to war and then he comes home and thinks about what happened to his buddy. If anything, thinking about the book while having this discussion has actually made me like it less. A war novel without anything meaningful to say about war is not much of a war novel. Ok maybe that is a bit harsh, I guess one could say the book manages to convey the fact that war is meaningless and ruins the lives of those who fight in them, even the ones who return home unharmed.