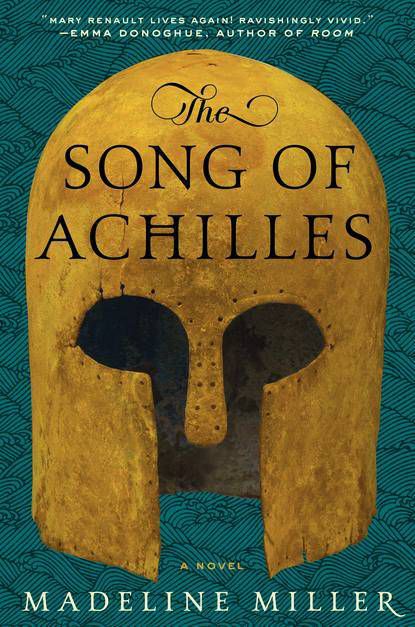 Madeline Miller’s The Song of Achilles is a re-telling of Homer’s The Iliad from the point-of-view of Patroclus, Achilles’ best friend and fellow soldier. The book gives an origin story for the relationship between the two men, and offers a gentler, less militaristic view of Achilles. The writing is beautiful, and Kim and I think it has high chances in the tournament:

Amanda: So I was a little trepidatious going into this book- I read The Iliad last year and while I respect it for what it is, it wasn’t the most pleasant reading experience for me. But The Song of Achilles blew my socks off- I read it in one day. What were your initial impressions?

Kim: I was a little nervous too. I haven’t read The Iliad, but I have read The Odyssey and have some affection for it. But with books like this, playing around with a well-known myth, I generally spend time worrying about how faithful to the original it is, which is I think a less-than-helpful impulse. But on the whole I really liked this one, especially the way the relationship between Patroclus and Achilles developed. Whether it was historically plausible or not, I don’t know, but it felt natural and honest to me. Switching gears a bit, perhaps, do you think reading The Iliad improved your experience reading this books?

Amanda: Yes, I think it did because I went in already knowing the ending and already familiar with the secondary and tertiary characters and the mythology. On the other hand, I already knew what was going to happen, so I did spend a good bit of time dreading the death of this character or that character. And The Iliad does hint at the nature of the relationship between Patroclus and Achilles, so there were no surprises there…though I have heard people say that Homer never MEANT their relationship to be romantic, blah blah blah. Another issue with re-telling a classic: people who freak out when you’re not true to their interpretation of the original text.

Kim: That’s interesting. I didn’t realize the original hinted at a romantic relationship at all. I guess I assumed that was a leap Miller was making based on some scholarship or another. That is a difficult part of these books though, what leaps you make in service of story. What did you think of the decision to have Patroclus narrate rather than say Achilles or a third person narrator? At first it felt very stilted to me — like we’d never see a human side of Achilles — but by the end it grew on me.

Amanda: Maybe it was just my translation? Or maybe my modern sensibilities read something that wasn’t there (happens!). I was really happy that Miller decided to do the book from Patroclus’ POV instead of Achilles because it seemed more like history from the “little guy’s” perspective- we already know what the heroes of The Iliad were up to for the most part. What I was most surprised about as far as Miller’s choices was the decision to keep a literal interpretation of the mythological aspect of the story. I didn’t expect the gods to be there, all…god-like. I expected rational interpretations of the gods’ supposed interference, I guess. What did you think about the mythological aspect?

Kim: You know, until you mentioned I didn’t think much about it — to me, a Greek myth just isn’t the same without all of the gods being there and interfering with just about everything. Although, since the book is from Patroclus’ point of view, the gods are still a little bit behind the scenes, other than his terrifying encounters with his “mother-in-law,” Thetis. I think if the book had been told by Achilles, we would have seen the gods more because he’s actually cool enough to talk to them. I’m really curious about that idea though, how you pull the gods out of these myths. Have you read other fiction that does that?

Amanda: I don’t think I have. But I have a lot of experience in Biblical study, and a lot of that can be focused on taking parables or elements of the Bible that have supernatural bits and breaking them down rationally or practically. Like, maybe Moses literally heard a talking bush, or maybe it was really hot and there was a wild fire and he was praying and whatnot. I guess I just automatically expect modern tellings of ancient myths to be the same as part of the “humanizing” of the story. So, down to brass tacks (don’t actually know what that means): what are the book’s chances in the Tournament?

Kim: Ahh, the ultimate question. I think it could have a decent chance — the story and writing are great, and the retelling of a classic myth thing gives it just enough quirkiness (a quality I tend to associate with TOB winners) to be a contender. What do you think?

Amanda: I think it could easily beat most of the field, though it might have a hard time topping The Round House. Actually, the romantic element is such a big part of the story that that might even hurt its chances. Romances can be judged as “less serious” than other books, even though this one certainly isn’t less serious and any such dismissal would be unfair. I hope it stomps most of the field.