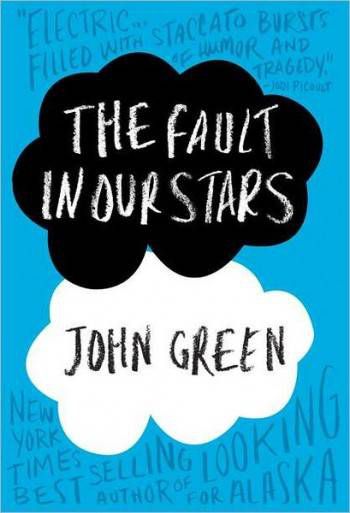 Today, Cassandra Neace and Kit Steinkellner discuss The Fault in Our Stars by John Green.

John Green’s The Fault in Our Stars has been called Young Adult fiction at its finest. It tells the story of Hazel and Augustus, two teenagers with cancer that fall in love and find happiness. While death is something that is a very real possibility for them both, this story is about how they live their lives. Of all the Rioters, I think Kit and I are Fault‘s biggest fans. Here’s what we think of its chances in the tournament.

Cassandra Neace:  This is one of those rare books where the hype is actually what convinced me to read it, instead of pushing it away. I clicked a YouTube link one night, and watched video of John signing the thousands and thousands of pages that he had promised to sign. He was worn out, he was funny, and he made me want to find out more. I started watching the Vlogbrothers videos. I got interested enough to attend the Houston event on his tour, and that night made me curious enough to finally open the book and start reading. I am so glad that I did. What made you pick it up?

Kit Steinkellner: Here’s my story with The Fault In Our Stars.  When the novel first came out I downloaded the free sample from Amazon and found the novel’s voice to be grating. I just could not deal with the Dawson’s-Creek-Buffy-Juno stylized teen hyperspeak. So I spent most of the year ignoring the universal praise because I just didn’t buy in at the start. Then, around Thanksgiving I went on a huge YA kick (normally I’m a literary fiction/narrative non-fiction kind of reader), and it just felt like the right time to give TFIOS one more shot. I’m so glad I did. It made me do that cliche laughing-while-crying kind of reading. One of the best books I read this year to be sure.

So this novel is that rare book that has almost 2,000 reviews on Amazon and has managed to keep its five stars. That’s a walking on water miracle in the literary world. Obviously it’s impossible to say exactly what makes a runaway hit a runaway hit but in your opinion what are the factors that made this book one of THE books this year (if not THE THE book)?

CN: The thing that kept me reading, even when I wasn’t sure about all the teenage self-awareness, were the books.  I’m a sucker for books in books. The way that they bond over their favorites – well, it kinda made me swoon. And I know that it is so easy to say that no teenagers are going to fall in love over two so very different books, but it does happen! Do they use their cancer kid wishes to go to Amsterdam to find out what happens to the characters after the ambiguous endings? No, but I firmly believe that a book can hold two people together in an almost magical way.

That’s the thing that gets some people about Green’s work, particularly in this novel. They just don’t find Hazel and Augustus believeable. This idea that two sick kids are so self-aware and so mature bothers them. I agree, it’s highly improbable, but it does happen. I’ve seen enough teenagers like these two – at least in some small part – that I buy it. Granted, I spent a lot of time with teenagers (I taught high school), so I had more exposure than your average adult-type person does. But I’ve seen kids who possessed these traits, even in similar circumstances, and it’s not that far-fetched. Did I like those kids initially? Not at all. They grew on me, though. Just like Hazel and Gus do in their brief, star-crossed time together. What is it that worked for you?

KS: I thought this book dealt with grief with just the most honesty and humor and empathy and humanity. The characters grew on me too, and they grew on me hard. Even though I really wish an editor had taken Green to task a little harder and made him differentiate his characters’ voices more (that one witty nurse felt so much like Rainn Wilson in the beginning of Juno in that random-side-character-talking-exactly-like-your-quirky-main-character kind of way), the characters themselves were so faceted and flawed they made up for the voice issues. I loved Hazel’s prickly intelligence and Augustus as the passionate blowhard. Also, the parents of both kids (Hazel’s especially) got to be fully realized characters, not always the case with books containing teen protagonists. I also thought the scene work was top-notch, there are so many, many, many memorable scenes in here–my two favorites are the first time the young lovers have sex and (probably one of my favorite scenes I read all year) the nod to The Adventures of Huckleberry Finn, just a deeply moving scene from start to finish.

So what do you think TFIOS’ chances are in the tournament?

CN: It is definitely the underdog. It’s too different from the rest of the field, and it is different in ways that will not appeal to some of these judges. I think everyone who has read it liked something about it, but I’m not sure that “like” will be enough to push it through. The fact that it has been such a runaway commercial success will probably work against it (because nothing of quality could possibly be a commercial success). I wouldn’t be surprised to see it  resurrected in the zombie round, though. It’s got a lot of fan support, and if it does make a comeback, I think that will make the final round judge think twice. There are some other amazing books in the running. They carry a lot of weight. But TFIOS is not the lightweight that people expect it to be.

And what’s your prediction?

KS: See, I think it has a really strong chance. It’s YA but it’s YA that is both highly literary and widely beloved. Both it and GONE GIRL transcend the confines of their genres, I really think those are the two to watch. And man, if it came down to those two in the final round, I don’t know WHAT I would do. I mean, I’d go with FAULT but GONE GIRL would be just so hard to say no to. She’d come and kill you in your sleep!

In any case, am really glad that FAULT is in the tournament. It deserves to sit at the grown-ups table.

CN:  If it came to those two, it would be TFIOS hands down. I hated GONE GIRL. I couldn’t even bring myself to finish it. Maybe it’s just the audio that didn’t work for me. Maybe I’d love it in print. I’m not sure. But there is nothing that I didn’t like about FAULT. It annoyed me now and then, at first, but once I was in, I was ALL in. I wish I could be as confident as you, because this is my favorite of all the books on the list, but I just don’t think the judges are going to give it its due. If it has a real chance, it’ll be the fans keep it in the running.