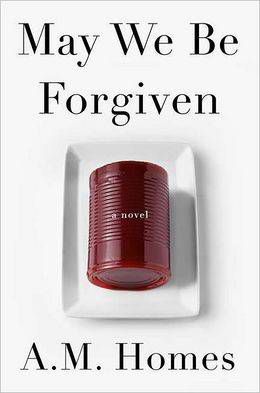 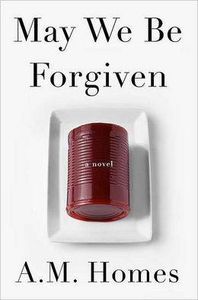 If we’re judging a book by its cover, A.M. Homes’ May We Be Forgiven may seem a tad mundane. But then, within the first 30 pages, a guy named George kills two people in a traffic accident, goes slightly insane, catches his wife Jane in bed with his brother Harry, and bashes her in the head with with a table lamp.

This is not a novel for the squeamish, and not just because of what happens at the beginning. Harry, a middle-aged Nixon scholar, narrates the fallout from these life-shattering events, and carries us through a novel that is a lot absurd, more than a little hilarious, a bit sad, and just a tad revolting here and there. A.H. Homes is known as a “fearless” novelist, not afraid to take chances, or take on any subject, and that’s fairly evident here.

Below, Rebecca and I discuss this Tournament of Books longshot.

Greg Zimmerman: So, before we even jump into Harry vs. Life in the aftermath of his brother’s meltdown, let’s talk about readability. I remember, before I started this, fellow Rioter Amanda tweeted something about how she hated all the characters, but still couldn’t put the book down. I feel similarly — many of these characters are just atrocious to the point of being Sherwood Anderson-esque grotesques. But you can’t turn away. Homes is so smooth, so readable, even when dealing with some icky subjects, it really is hard to close the covers. Would you agree?

Rebecca Joines Schinsky: You know, I don’t really agree. I didn’t love any of the characters, but I did really sympathize for Harry and the kids and came to like them quite a bit. And I wouldn’t call the characters atrocious. Every last one of them has made some Very Bad Life Choices, but they make — taken alone — the kinds of bad choices any of us could make in a moment of weakness or desperation or really-not-thinking-straight-ness. It’s just that they happen all at once here. And isn’t that how life is? Poor Harry thought he was just committing run of the mill adultery (albeit with his sister-in-law, so add in a side of family betrayal); how was he to know his brother was going to go batshit? That’s where Homes’ skill with the absurd comes in. She layers bad choice upon bad choice, weird circumstance upon even weirder circumstance, and somehow, it really works.

GZ: The problem with Harry, though, doesn’t seem to be that he makes bad choices or has moments of weakness. It’s that he doesn’t make decisions at all! Indeed, as the story continues to unfold, it seems more and more that Harry is tugged along by forces beyond his control. That things just happen and he just goes with them. (His wife telling him to “take care” of Jane while George is away is his justification for adultery?!)  And to me, that’s why we don’t put too much thought into the cause and effect of the absurd things that happen — why, for instance, Harry finds himself in a suburban sex club with a married woman, and we think “yep, that seems about right.” Harry does eventually begin to figure things out, though, and as he does, that’s when he becomes more sympathetic. So I think we agree on Harry that he’s not atrocious in the end, we just took different paths to get there.

RJS: That’s really well put, G. Harry is go-with-the-flow passive to a fault. He sorta-kinda-maybe knows what he wants, but he’s incapable of identifying the incremental steps to getting those things, so he just floats along on the tide of other people’s decisions. Jane comes on to him. George leaves him responsible for the children. Cheryl invites him to the sex club, and Amanda starts the thing in the grocery store (and hello, whose wish fulfillment moment is this to meet a stranger in the grocery store and start an affair?), not to mention all that follows with her parents, Cy and Madeline. The kids push and pull him into other critical moments. But he becomes more capable of dealing with them as the book — and the year of life it presents — progresses. The situations he finds himself in don’t become any less absurd, but we buy into it all the way through. How do you think Homes pulls that off?

GZ: You’re right — that’s the best trick of this novel: That we continue to buy into the absurd! Could it be because we simply learn what to expect with Harry, and so the absurd becomes the new normal? Or maybe, because Homes is terrific at distracting us with comedy. I mean, we range from maybe-too-easy-but-still-snort-worthy bathroom humor, like a banner for the kid’s bar mitzvah that reads “Congratulations on the Big BM,” to deadpan one-liners, like Harry’s response to a guy who asks him how he thought the rabbi did: “It’s not my policy to review funerals.”  The humor here was one of my favorite parts of Homes’ writing.

RJS: I loved the humor too, particularly as it played out with Amanda’s parents, Cy and Madeline. And Harry’s visit to see George at The Lodge — the insane asylum where he’s awaiting trial. It was so depressing, but also completely ridiculous. By incorporating humor into the sad things that happen to her characters as they age and do horrible, hurtful things to each other simply because they can, Homes reminds us that they aren’t villains — they are only human, and we are them. That “we” in the title is significant, don’tcha think?

GZ: I’m really glad you brought that up, because I think that’s the main theme of the book — that in order to be well-adjusted humans, we (yes, we are them) have to learn how to love or like or abide or at the very least tolerate other humans that are distasteful to us — especially when they’re family. And the sooner we learn this, the better we can be. I loved that many of the principals in this novel “get better” in one way or another. Harry ruminates on that as he watches the kids be attentive to their guests at Thanksgiving dinner, instead of gluing themselves to their phones, as they did the previous year, when this whole mess started. I think it’s the mark of a good novel — that the characters, who start out odious (though I know we disagree on the degree of odiousness), learn and improve.

This may be a Tournament of Books longshot, but if you’ve never read A.M. Homes, I think we’d both agree that we’d highly recommend this. It’s a lot of fun!

RJS: Tons of fun. And the book is something of a critical darling, so you never know. If Homes goes down in the first round, her zombie resurrection chances aren’t very high, but a first round pairing against something that plays things a little straighter (cough Beautiful Ruins cough), or one of the more ambitious but less-well-executed novels (I’m thinking Ivyland) could mean May We Be Forgiven goes further than expected.