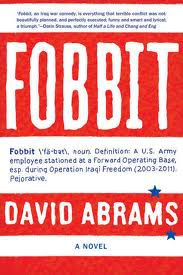 LH: To start, I think it should be pointed out that this is one of three major novels about the Iraq war that were published last year. The other two are The Yellow Birds and Billy Lynn’s Long Halftime Walk, and all three are ToB contenders. I have read them all – have you read either of the other two?

CN: I’m kind of a sucker for war novels. I have been reading The Yellow Birds on and off for a few weeks. I like taking it in in small doses. It’s really good. I only recently realized that Billy Lynn was a war novel, too. I hadn’t been too interested in it before.  I will definitely be picking it up soon. Fobbit is a different animal.  I think that might be because it is from the perspective – more often than not – of a fobbit, and not a soldier on the front lines.  Different experiences make for drastically different books.  Was Fobbit what you expected it to be?

LH: Yes, it was everything all the quotes on the jacket claimed it to be, which doesn’t always happen when I read a book. The adjective used most was ‘hilarious.’ Which it is, but it’s one of those ‘if you don’t laugh, you’ll cry’ deals. This quote from Karl Marlantes, author of the amazing Matterhorn, hits it succinctly: “Fobbit is hilarious, but the subject matter is deadly serious.” You?

CN: I really didn’t know what to expect.  It’s been a long time since I’ve read Catch 22 or Slaughterhouse-Five, two of the books it has been compared to because of the “hilarious” stuff.  I am a huge fan of M*A*S*H, and I’d heard that comparison, too.  I’m such a big fan of that show, that I tried not to look for it as I read the book.  I found it, though.  It’s kinda like if M*A*S*H had been about Radar.  It was great fun – and when it wasn’t fun, it was ripping my heart out.

LH: Exactly. I guess in the interest of full disclosure, we should probably mention that David Abrams is a fellow Rioter. However, this in no way influenced the way I felt about the book. It’s a really, really damn good book and I’m very happy for David and all his Fobbit success. The book is funny, it’s heartbreaking, it’s smart – how do you think it will do in the ToB?

CN: Its a contender. It’s biggest competition – based on what I’ve read so far – is The Yellow Birds, which is totally beautiful and heartbreaking.  What Fobbit has working in its favor, though, is that it has such a different perspective.  We’ve read about the front lines so many times. It was nice to read about the guys who stay behind the lines and keep things running.  There are also some pretty unforgettable characters.  I am still laughing at the emails that Harkleroad sends home to his mother.

LH: The behind-the-scenes aspects of Fobbit really were great, and it was incredibly funny. I liked The Yellow Birds the least out of the three, even though I liked it very much. It’s incredible writing, but I felt like I was reading the movie The Hurt Locker. I may even like Fobbit more than Billy Lynn. But as much as I would like David to succeed, I feel like they’re going to cancel one another out. My money’s on Building Stories or Bring Up the Bodies, even though I love The Orphan Master’s Son with the heat of a thousand suns. Who do you think will win?

CN: I really hope that the war novels don’t cancel. I like them too much. And I think they are, in a lot of ways, the most socially relevant books on the list.  I’m interested in Building Stories, but I haven’t read it yet.  I am purposefully not reading Bring up the Bodies. I’m not a fan of historical fiction, no matter how amazing the writing is.  I have a sentimental pick – The Fault in Our Stars – but I don’t think it will win.  I’m not really sure which book I think will take it all the way.  I’m still doing the reading, though.  I’d like to see Louise Erdich and Round House take it because… well, for reasons.