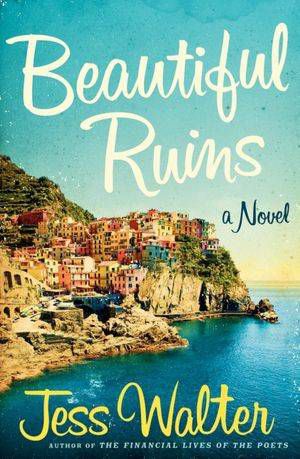 Jess Walter is an amazing storyteller; a novelist who in constantly evolving. He first introduced himself to readers with a few hard-boiled detective story novels (Citizen Vince is the best of these), moved on to one of the best post-9/11 novels (The Zero), continued his momentum with an hilarious, timely look at a mid-life crisis (The Financial Lives of The Poets), and now, with Beautiful Ruins, Walter gives us a story about regret and the importance of doing the right thing.

Beautiful Ruins is about Richard Burton and Liz Taylor on the set of the movie Cleopatra in 1962. It’s about a young production assistant named Claire, in modern times, struggling with her idealism. And it’s about a lot of things in between.

Below, fellow Rioter Rebecca and I give you what you need to know about Walter’s Beautiful Ruins.

Greg Zimmerman: So I actually read this back in August soon after it first came out. I mostly loved it! (I didn’t love the oxymoronic title, but discovered that the title actually comes from a 2010 New Yorker profile of Burton: “Burton, fifty-four at the time, and already a beautiful ruin, was mesmerizing.” It’s my least favorite part of this terrific novel.)

Anyway, one of the first things that stuck out to me is that Walter is able to jump back and forth in time, and between different types of storytelling (hell, there’s an entire pitch for a screenplay called Donner! included) and it never feels like he loses his way. In the hands of a lesser storyteller, these jumps in time and scene could be rather a turn-off. Agree or disagree?

Rebecca Joines Schinsky: Oh god, I so agree about the title. Totally groan-worthy, and it’s one of the things that put me off reading the book until the ToB put it on the bracket. That and the cover. It just looks so….nice. On the whole, I mostly sorta-liked-but-didn’t-love it, so we’ll have lots to talk about here. Anywho…

Novels with multiple lines of narrative and stories that move back and forth in time are one of my readerly kryptonites — I can’t get enough of them — and I agree that Walter handles it quite well. The chapters are clearly marked, and the changes are never disorienting. Walter makes sure we always know where we are, and (to crib from LOST) when we are. And since you mentioned the screenplay, let’s talk about how he incorporates other media. There’s the Donner! script, the thrown-out first chapter of a main character’s memoir, and the synopsis of a play written by another character. I love it when writers do this well, when they show us the things their characters create instead of just telling us about them. I wish there were more of that here — it gives the characters dimension, and I felt like they were generally pretty flat and uncomplicated.

But I think the exceptions are Pasquale and Dee — the young Italian kid and the beautiful American actress. It’s really their stories that are the cornerstone of the novel — and more importantly, what these two characters may have in common. And I think they’re rendered beautifully — their stories intertwining in more and surprising ways as the novel unfolds. As Pasquale’s writer buddy tells him, “Stories are people. I’m a story, you’re a story … your father is a story. Our stories go in every direction, but sometimes, if we’re lucky, our stories join into one, and for a while, we’re less alone.”

I love that idea — it’s a quote that’s stuck with me. Was there anything in the novel that stuck out to you like that? Did you learn anything important (other than not to trust English guys who promise to reboot your flagging music career)?

RJS: Don’t sleep with movie stars! And being obsessed with fame is unhealthy. Okay, I sort of already knew those things because I watch too much TMZ, but Walter makes the point much more eloquently.

While I wasn’t a big fan of the story, I did enjoy his writing. On the very first page, when Pasquale first sees Dee, Walter says it’s as if in a dream, then, rather, “a dream’s opposite: a burst of clarity after a lifetime of sleep.” I really loved that.

There’s also “Life, he thought, is a blatant act of imagination.” And related to the line you pulled out, “All we have is the story we tell. Everything we do, every decision we make, our strength, weakness, motivation, history, and character–what we believe–none of it is real; it’s all part of the story we tell. But here’s the thing: it’s our goddamned story!”

Come to think of it, my favorite parts of this book weren’t the ones that told the story but the ones that talked *about* story, and about the function that stories — the ones in books and movies, and the ones we tell around lively dinner tables — have in our lives.

GZ: Boom! Yes! I almost agree with you regarding the story itself (though I may have liked it slightly more than you — but yours seems to be a common reaction for folks who were only so-so on the novel), but we DEFINITELY agree on Walter’s quotability and his handle on the power of story.

So, what do you think this novel’s ToB odds are?

RJS: I gotta say, I don’t think this one stands much of a chance of making it out of the first round alive. There’s some knock-your-socks-off writing and some incredibly inventive stuff happening in many of the other finalists, and I don’t think Walter said anything new, or said an old thing in a new-enough way, to stand out in the field. What about you?

GZ: I actually think it has a good shot at getting out of the first round and an outside shot of getting a lot further. You might say this is my “sleeper” pick. I thought the story was pretty inventive, even if you didn’t totally dig it; that it was a new enough take on the missed connections/regret theme that it actually did “say an old thing in a new way.” But overall, it definitely has an uphill fight. We’ll see…