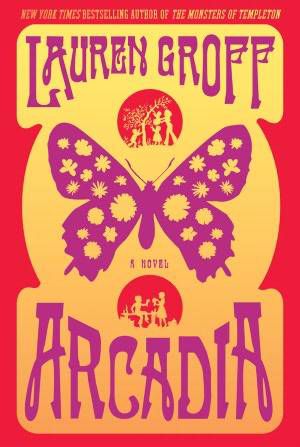 Jeff: Alright Kim, well we get to lead this whole thing off.

I want to lead off by quoting the publisher’s description of Arcadia, both to get the annoying “here’s what this book is about” part out of the way and to talk about how this novel was quite a bit different than what I thought it would be:

In the fields of western New York State in the 1970s, a few dozen idealists set out to live off the land, founding a commune centered on the grounds of a decaying mansion called Arcadia House. Arcadia follows this romantic utopian dream from its hopeful start through its heyday. Arcadia’s inhabitants include Handy, the charismatic leader; his wife, Astrid, a midwife; Abe, a master carpenter; Hannah, a baker and historian; and Abe and Hannah’s only child, Bit. While Arcadia rises and falls, Bit, too, ages and changes. He falls in love with Helle, Handy’s lovely, troubled daughter. And eventually he must face the world beyond Arcadia.

Here’s the thing: I think this description distorts the actual content of the novel. This book is really about Bit, who isn’t mentioned in the summary until the end of the description. Arcadia, the commune, is a vivid setting, but this is Bit’s life-story, not the story of Arcadia. When I finished the novel, it took me a little while to get the bad taste out of my mouth that it wasn’t what I thought it was. If this novel was called “Bit” or something, maybe I would have warmed to it sooner, but with “Arcadia” as the title, I expected it to be the central character, which it really wasn’t.

Am I being fair here?

Kim: Well, I’d say yes and no. I was expecting more time with the hippies too, so when the fall of Arcadia came so soon in the book and Bit and family left, I felt jarred. The description does weight the physical place of Arcadia pretty heavily compared to how the novel shakes out. That said, it seems to me that Bit is really just a vessel to tell a story about Arcadia — not necessarily the physical place, but the idea of Arcadia or a utopia. Arcadia felt, to me, like more than a place. It’s also a frame for Bit to grow and think about home and family and perfection. Arcadia never seems to be far from Bit’s mind, even when he’s not physically there. Even when we weren’t in Arcadia, I felt like Arcadia was there acting as a central character or idea of the novel.

Jeff: Fair enough. How about this, though. Why tell the story of Arcadia through Bit? I wanted so much more of Arcadia proper, and I guess my ideal version of this novel would have an A Visit from The Goon Squad rotating, multi-decade point of view. It just seems weird to tell the story of a commune through one perspective.

Kim: That is a good question, but I think the answer has something to do with the fact that Arcadia isn’t really a place, it’s more of an idea. The problem with utopia is that it’s unsustainable; from the start, there was no way Arcadia was going to work and so, in some respect, it wouldn’t be true to the vision of Arcadia to go back to that same physical place every, say, 10 years, because the Arcadia that’s the ideal of this story — and the ideal for Bit — wouldn’t be there. But by telling the story through Bit, you get to hold on to the ideal of Arcadia even while the reality of the place changes? I’m not sure. But, going with your idea (which I also think is really appealing): How would you write Visiting Arcadia with The Goon Squad? What themes do you think would be better served by that format?

Jeff: Well, I think the thing that was most interesting to me about Arcadia was the variety of reasons people had for joining (and leaving). Bit never was a part of that choice-making; his parents made both the decisions to join and leave, so that part of the experience was almost completely missing. In fact, Bit never makes many choices at all, and I found myself considerably more interested in his parents’ story, the story of the founder of Arcadia, and of the commune’s Amish neighbors, who drop by every few years to smoke weed. The complexity and polyphony of the commune just seems so well-suited to multiple narrators that I found myself wanting more. This might also explain my frustration with the romantic story, where Bit falls for the damaged, beautiful daughter of the commune’s founder. That seemed, in the end, more central than even Arcadia was. What did you think of the love, such as it was, story?

Kim: The Amish neighbors! I never quite figured out what they were for, other than perhaps as a contrast to the people of Arcadia and evidence that a society deliberately apart from the mainstream can survive. But you’re right, there are a ton of interesting people at the commune who are slight. I wanted more about Leif and how he ended up flying away into space on a hot air balloon — that seems like a missed story. But anyway, to your question: I thought the romantic part of the story was frustrating as well. It seems like a sort of obvious narrative ploy — narrator falls for unavailable damaged girl. And then because of the structure of the book, most of their love story happens off the page, so you just have to trust that there’s a reason Bit loves her that we don’t see.

Despite all of that, I thought the book ended really strongly, with the return to Arcadia to care for Bit’s aging mother. The dystopia ending reminded me a bit of A Visit from the Goon Squad too, but probably for different reasons. What did you think of how the story ended?

Jeff: While it is one of those quiet, ambiguous endings for which literary endings are so often slammed, I thought it was good as well. The implication is that the most stable and satisfying form of “utopia” is that of family. The reasons are both structural and emotional; a smaller group is easier to sustain and the emotional ties that bind the members are considerably stronger than the purely ideological or political ideas that bring together groups of strangers. Notably, though, the family that holds at the end is completely devoid of romantic love. It is a grandmother-father-daughter triangle. The novel, for all of its turn toward the family at the end, remains skeptical of the durability of romantic love.

Ok, final thing: what’s your take on Arcadia as a contender in the Tournament? Strengths? Weaknesses?

Kim: This part is always hard, since the winner of a particular match up often has a lot to do with the judges. On the plus side, I thought the writing was excellent — even when I wasn’t totally feeling the plot, I was really digging the imagery and style of the book. Lauren Groff can write some beautiful sentences. On the other hand, I don’t think it has the quirkiness that both of last year’s finalists had and, if it loses in a round, I don’t think it has the same passionate fanbase that say, Gone Girl or The Fault in Our Stars might have to bring it back in the Zombie Round.

Jeff: Good point about the Zombie round. In general, Rooster winners tend to be pretty plot-driven, and Arcadia really isn’t. It does have some beautiful writing, but I don’t think that’s going to be enough to give it legs here.