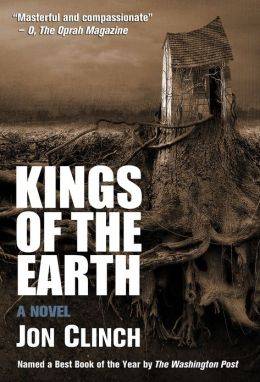 Jon Clinch’s Kings of the Earth is newly available in paperback, and Clinch is publishing it himself. I wrote this about the hardcover version when it was released 2010.

I saw Gilberto Alvarez almost every day, in summer heat and winter storm. I remember seeing him on my 30th birthday and on the first anniversary of September 11th. I knew something about him; he loved baseball, talking about the MTA, and dogs. Now that I think about it, I probably saw him more often than anyone except my girlfriend. And, until he died, I didn’t know his name.

I suppose most of us have a Gilberto Alvarez in our lives, or perhaps I should say around our lives. Someone who is both oddly present and discomfiting. Someone who is off-putting because of some combination of station, appearance, and behavior. Someone on whom we spend more energy ignoring than acknowledging.

In Jon Clinch’s strange and fascinating Kings of the Earth, these are the Proctor brothers: Creed, Vernon and Audie. The bizarre sons of hard and gnomish parents, the Proctors live, work, and sleep together on their scrub farm in central New York. They aren’t charming misfits or wizened hermits waiting for someone to discover their hearts of gold. They are illiterate, ignorant, stubborn, and disquieting. Their connection to the world beyond the farm extends only to their sister, who somehow escaped the family, and one interested neighbor.

It should be said that this is not a story of rescue or redemption. Clinch isn’t interested in making us feel better about these men, but he is interested in getting us to see them.

I didn’t go out of my way to see Gilberto, and I really don’t know if he ever recognized me.

Still, there he was, every morning, outside the subway station. I never saw him arrive or leave, and, judging by the state of his wheelchair, he either didn’t go far or had someone help him to wherever he spent nights. Some days his prosthetic leg was with him, some days it wasn’t, but I never did see him wearing it. It might be propped up next to wheelchair or laying on one the stairs down to the platform. I once saw him use it as a kind of scepter, waving it emphatically to underscore his more passionate points about the Mets’ lack of pitching.

Clinch gives us some insight to how the brothers ended up this way, a disquietingly believable combination of poverty, distrust, and pathology. We end up feeling about the Proctors in much the same way as the people around them do—a little curious but mostly repulsed. And the local farmers and businesspeople leave them well enough alone until the middle brother, Vernon, dies in his sleep. The mystery of his death supplies what little plot there is here, but Kings of the Earth isn’t a story of these men so much as it is a mediation on difference: not the discourse of diversity or of multiculturalism or of a “rainbow society” but of the difference that makes us scurry past someone or avert our eyes.

Over the nine or so years I walked past Gilberto’s change cup, I probably gave him less than three dollars.  I’m not even so sure he was really there for the money, though I know he needed it. More than anything, he watched and waited for the few people who would spend a minute talking to him. From what I can tell, most of these were living rough like him, though with varying degrees of wear, and I don’t have any idea what they talked about. I try to imagine their conversations now, but I don’t come up with much and can only guess at the kinds of things that occupied their minds.

In the end, Clinch doesn’t ask us to like or understand the Proctors. Truth be told, I’m not entirely sure what our attitude toward them is supposed to be. I think most readers will feel sympathy for them, especially Audie, but it’s a qualified and awkward sympathy. Even after getting to know them, we wouldn’t want to spend time with them. Does that make us callous? Would our better angels have us play cards with them on cold February nights or invite them to our summer barbecues? I doubt it. As we see the Proctor brothers through the eyes of those around them, we don’t just see the brothers, we see they way they are seen; they are misunderstood, caricatured, ignored, exploited, and underestimated, and so our own misunderstanding, ignorance, exploitation is cast into the open.

One morning a couple of months ago, Gilberto and his wheelchair were missing. Instead, there was a piece of white paper taped to a light pole that read “Gilberto Alvarez, ????-2010” and a plastic tray full of sandwiches on the sidewalk. A couple of men were standing there, talking and eating the sandwiches. It took me a minute to realize that someone had brought them to mark Gilberto’s presence and passing.

I don’t know if I should have tried talking to Gilberto or gave him a few quarters every couple of weeks. I’m not naive enough to think everyone can be saved, but I’m not so callous that I want to ignore them. And perhaps that’s what Kings of the Earth offered me: a way of seeing Gilberto and not flinching, of acknowledging his existence and his death without sentimentalizing or marginalizing him. He was here, and he was one of us. That’s not the best I can do, but it’s all I can do now.