Ever been to one of those Halloween parties where people sit around in the dark with a flashlight and attempt to tell scary stories? It never works quite the way it should. There is often more laughter than there are gasps of surprise or screams of terror. Here are a few stories that are sure to creep you out in just the right way, told by people who know how to tell stories.

Xe Sands got her start as a narrator by recording books for Librivox, but it was not until she witnessed the collaboration between Robin Sachs and Tanya Perez on “The Wreck of the Hesperus,” that she was inspired to start recording her own versions of public domain works and posting them for everyone to hear – for free. The #GoingPublic project posts new listens every Friday. Sometimes, its just something by Sands, but more and more frequently, other narrators (both professional and amateur) join in. Last Halloween, Sands read Edgar Allen Poe’s “The Tell-Tale Heart,” and her interpretation of “The Raven” is very impressive. H.P. Lovecraft’s “Dagon” as read by Oliver Wyman also comes highly recommended. Click the images to listen. 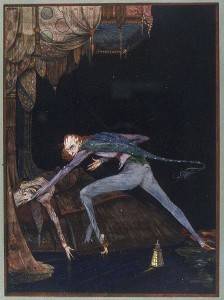 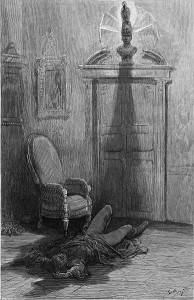 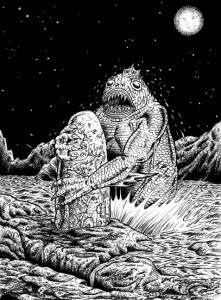 In the late 1930s, Orson Welles and John Houseman assembled a company of actors that performed readings of classic literature on the radio under the name The Mercury Theatre. The most popularity of these broadcasts is one from October 30, 1938 – War of the Worlds by H.G. Wells.  This performance was presented as a news bulletin and caused genuine panic among some of its listeners, who believed that the Earth was really being invaded by martians. Their first broadcast, however, was Dracula. Here are links to both stories, two of the Mercury Theatre’s most chilling tales. Click the images to listen. 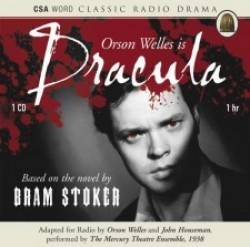 Neil Gaiman began writing a story about a boy who grew up in a graveyard in the mid-80s. He wasn’t entirely pleased with what he wrote, however, until shortly before the book built around that first story was released in 2008. The Graveyard Book is something of an homage to Rudyard Kipling’s The Jungle Book, except that this child is adopted by ghosts, and he is raised in their world, among the tombstones. It is a story that is completely appropriate for children, while still giving chills to their parents. While Gaiman was on tour for the book, he read it in its entirety, and the readings were filmed and posted to the website for his books for children, Mouse Circus. I listened to the audiobook (which he also narrated), and it is definitely worth a listen. Below, you’ll find the trailer, but you’ll have to visit Mouse Circus to hear the whole book.

*Update!  They are doing the same treatment with Coraline, another delightfully creepy book for the younger set. The first installment, read by Gaiman, was posted today, with a new chapter going up each week.  This time round, though, it’s not just Gaiman doing the reading.  Authors like R.L. Stine, Lemony Snickett, Melissa Marr, and Neal Shusterman all join in, too!