I know. I know. I can hear you now: “Hey Turkey! The Harry Potter films are just adaptations of more famous books! Surely this is a book-to-book recommendation engine?” To which I offer the rebuttal, “Down in back” and also “I’m calling security.” Mostly, I just want to talk about Harry Potter. First up, I want to look at young adult books, because I worked in a bookshop and spent lots of time offering suggestions on where to go next.

(A caveat: I know that kids, teens, and adults read all of these books. I’m not very big on genre divisions of any sort. This is just a convenient way to split up a pair of articles. Rest easy.) 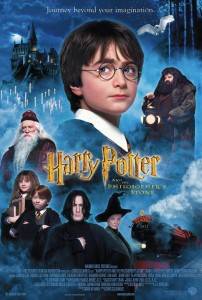 HARRY POTTER 1 – 8: They’re remarkable things, the Harry Potter films, and I’m not the first person to note their multitudes of strengths. They have nearly everything going for them: a haunting and brilliant theme by John Williams; an ensemble cast of pretty much every brilliant British imaginable; child actors who grew up over the course of the films and never became buried by their own movies, as it turns out they were all fantastic grown-up actors. A rotating series of directors who brought different moods to the films, allowing the films to progress from bright and whimsical early on, to very dark and powerful by the end. A remarkable series, unlike nearly anything else. 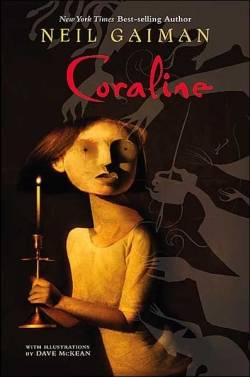 Coraline by Neil Gaiman–Coraline has its own Harry Potter connection, in that it had the good fortune to come out the one year there wasn’t a new Harry Potter book. This is a small, spooky, low-key book by Neil Gaiman about a young girl named Coraline who lives in a big, weird house full of a lot of odd neighbors, and whose living room has a bricked-up door in it. One night, she opens the door, and the bricks are gone. When she goes through, she finds herself in an apartment identical to her own, populated by a mother and father identical to her own…save for the big black buttons they have instead of eyes. They are her Other Mother and Other Father, and they love her very much, in a very dangerous fashion.

The book possesses a sinister quality, although it’s very understated, and that’s something that the later Harry Potter films managed masterfully: the low, crawling feeling of dread, and of things beginning to go very wrong. It also shares Harry Potter’s celebration of being brave in the face of dangers of all sorts, even when you’re really scared, and I think if your book’s gotta have a message for the kids reading it, “be brave” is a good one to have. 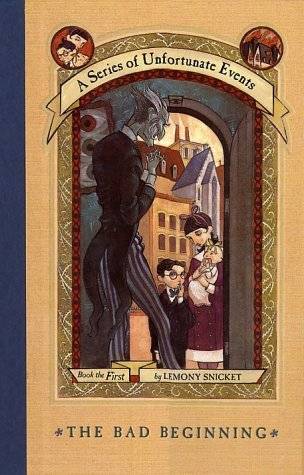 A Series of Unfortunate Events series by Lemony Snicket–I don’t know why I recommend these dreary books to hapless children who should do something more enjoyable than reading them, such as digging holes.

Actually. The thirteen books in this series are much smaller and simpler than the Harry Potter films on occasion, but they are always funny and clever and very, very enjoyable. They were published during most of the Harry Potter years, and in a way that’s a shame, because they seemed like an “also-ran” next to the Potter behemoth. They feature a hilarious narrator, a scheming Uncle, and an awful lot of clever gadgets and plots. More than anything else, what they have in common with the Harry Potter films is the very odd, occasionally silly world in which they are set. There is an odd house hanging out over the ocean in the books which would not look out of place in the Potter films. Much like Coraline, these are a delight to read aloud to children, or to a hapless spouse who has already laid down for the night and thus cannot escape. For example. 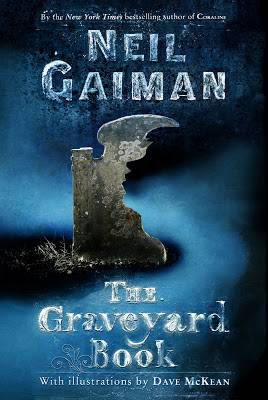 The Graveyard Book by Neil Gaiman–The Graveyard Book takes the structure and the basic premise of Rudyard Kipling’s Jungle Book – a small boy, raised by the animals of the jungle – and moves it over to a cemetery – a boy raised by the ghosts of a graveyard. As with so many wonderful books, it is a simple idea, handled skillfully. The adventures of Nobody “Bod” Owens throughout the graveyard are very simple, on the surface. The book is funny and heartwarming (and heartbreaking, particularly, I think, if you’re a parent), and Bod is a wonderful hero to follow through childhood. The dead of the graveyard are show-stealers, though. They are funny and utterly original and fantastic.

Next Time: more Harry Potter, except we look at nominally adult recommendations. In the meantime, you’ve got lots of reading to get done. Why are you still reading this paragraph? I mentioned a lot of books! Get to ’em!

Sign up to The Kids Are All Right to receive news and recommendations from the world of kid lit and middle grade books.
Thank you for signing up! Keep an eye on your inbox.
By signing up you agree to our Terms of Service
#Children's#Fiction#Science Fiction/Fantasy#Young Adult Literature#coraline#graveyard book#Harry Potter#lemony snicket#movie-to-book recommendation engine#neil gaiman#rowling