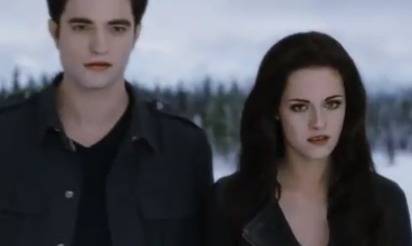 :01- Bias up front: I don’t understand why Breaking Dawn had to be a movie broken into two parts. I’m not even sure why it was one part. I’m also not sure why it was a book. That’s my bias. LET’S GO!

:10- Bella voice-over in the woods “After eighteen years of being utterly ordinary I finally felt like I could shine.” I get really excited because I think this means Bella is  going to go to college and attend seminars on linguistic anthropology and post-modern art history and become a person you would want to have a conversation with for longer than eight seconds at a  housewarming party.

But no, she just becomes a vampire.

:13- Also, that “utterly” was such an awesome shout-out to Stephenie Meyer and her inability to write a sentence without using an unnecessary adverb. You can’t be a character in a Stephenie Meyer novel if you don’t shout angrily, murmur sadly, or mutter grimly. You just CAN’T be.

Category ID: 13193
Category ID: 1091
Category ID: 468
What’s Up in YA? Newsletter
Sign up for What's Up In YA? to receive all things young adult literature.
Thank you for signing up! Keep an eye on your inbox.
By signing up you agree to our terms of use

:30- I was going to say something disparaging about Robert Pattinson’s acting but then he looked really handsome in this clip and I got distracted.

:33- Kristen Stewart has a good line of dialogue and delivers it well and now I don’t know who to make fun of.

:41- I am OBSESSED with Michael Sheen who plays Aro, leader of the Volturi. He’s such a campster! I think he’s the only one who knows this movie is insane. Everyone else thinks they’re in Citizen F—ing Kane and Sheen is just mugging left and right. I want to kiss his nose.

:45- Alice and her fortune-telling vampire superpowers to the rescue to fill plot holes! Every vampire has a superpower in Twilight, which is one of the three cool things Stephanie Meyer did in Twilight (the other two involve werewolves and making out with werewolves).

Vampire superpowers include Edward being a busybody nose-ster and reading the thoughts of all the dudes that want to sleep with his human girlfriend, one of his brother’s being good at arm wrestling, and another sister being good at being pretty.

When Bella becomes a vampire she gets a superpower too.

I’m not going to spoiler here and tell you what it is, but I promise you that whatever you’re thinking, it’s way stupider than that.

:55- There’s this quest to find all these vampires to stand with the Cullens against the Volturis. I feel like this is just the Cullens wondering which of their Facebook friends are, like, their friends in REAL LIFE, but they’re too embarrassed to outright ask, so they have to put up this “We’re going on an epic journey, will you join us?” front.

If they’re your real friends, they’ll like you whether or not you’re going on an epic journey. You guys! I know things about friendship!

1:07- We get this shot of Michael Sheen wearing a high school marching band uniform and Dracula cape. This costume designer deserves an Oscar

1:12- They have this shot of the Volturi running at Cullens and friends in the snow. The trailer is trying to trick you into thinking the climax of this story is interesting. It’s not. I promise you. It’s not.

I won’t reveal why it’s not (because I am not a Spoiler Whore) but if you need a hint, it has to do with Bella’s vamp-power which is really stupid and would be the last thing I would want as my “Sorry you’re a vampire now, but consolation prize, you get a superpower” ability.

If I was going to be a vampire with a superpower I would want to be a time-traveling vampire. The stipulations of these time-traveling powers would be that I would never die from cholera or get shot by a cannonball and I show up in each new place and time already dressed in an adorable and period appropriate outfit.

What would your vampire superpower be?

Now I’m getting punchy, I think this trailer rundown is officially over.